ARTICLES IN THIS ISSUE

‘Education Is Biggest Issue for 2020’

James or Luna?: Gender Crisis Within a Family

New York has come up with a plan to avoid educating students by killing them in the womb or as soon as they’re born. The Reproductive Health Act allows abortion “at any time when necessary to protect a patient’s life or health.” The law’s language states this can be done by a “licensed health care practitioner.” Kathleen Gallagher, director of pro-life activities for the New York State Catholic Conference, says that the bill’s proponents claimed it simply codified Roe v. Wade but that it actually lets non-physicians perform abortions, allows late-term abortions, and even allows for the killing of children born alive in a so-called botched abortion. (Townhall, 1-7-19)

The new president of Planned Parenthood admits that the organization primarily provides abortions and is a political entity, after initially claiming to be a physician-leader who wanted to avoid controversy. Leana Wen said, “The 2018 midterms, including the record number of women and the historic pro-reproductive health majority elected to House, prove that Planned Parenthood continues to be a powerful political force across the country.” In a tweet, she said, “Our core mission is providing, protecting, and expanding access to abortion and reproductive health care.” Planned Parenthood performs about 321,000 abortions per year. (National Review, 1-8-19)

For 185 years, Stephens College was a private all-female college in Missouri, but as of the fall semester of 2019, it will accept biological males who “identify” as female. The school will not admit females who identify as male. It justifies the changes, saying, “All of the nation’s women’s colleges are reconsidering their admissions policies in light of the changing cultural understandings of sex and gender” and that out of 39 colleges in the Women’s College Coalition, 26 are following the same policy. (Breitbart.com, 12-28-18)

BOOK OF THE MONTH 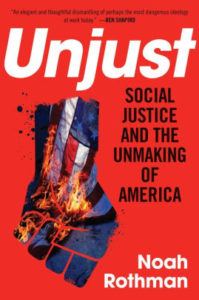 Author Noah Rothman offers examples showing “that a preoccupation with identity becomes a mania when it forms the basis of an ideology, and that ideology blinds its devotees to certain inopportune realities.” Many believe there’s an unjust faction of society trying to normalize prejudice. The victims often aren’t those members of society against whom prejudice was historically wielded.

Rothman says, “… social justice in its modern form encompasses the idea that an ill-defined class of persecutors and oppressors is due for a reckoning.” Seeking revenge for “repression of the past” rarely ends well.

Ever since universities created departments focusing on the real and alleged injustices suffered by minorities and women, there has been a rush to victimhood. The goal of professors and administrators seems not to have been related to fairness or justice, but instead to increase division, promote envy, and hand out special privileges.

Belief that in America race, class, and sexual orientation determine individuals’ ability to succeed is not borne out by facts.

Consider the danger to America when the First Amendment right to free speech is no longer given to everyone but considered instead in the “context” of who is and who is not “oppressed.”

Another American principle, the presumption of innocence until proven guilty, is under siege at colleges where accusations of rape ruin lives without a fair hearing, let alone a trial.

The final chapter of Unjust is titled “Throw It the Hell Out.” The NEA and AFT, the largest teachers unions proudly boast that they are social justice organizations. Until their faulty narratives are exposed and eliminated, there will be a continued fall toward Marxist divisiveness and socialist training throughout the education system. Particular attention should be paid to teacher-training programs.

Noah Rothman is a contributor to Commentary, a magazine that has existed since 1945. The magazine began with a liberal slant but has evolved to the right, as liberals have become increasingly prone to extremism.

Real justice should be available to those with valid grievances.

What You Need to Know is about classified documents and presidential power! Joe Biden’s unmasking may be coming, thanks to the GOP House. The DOJ has … END_OF_DOCUMENT_TOKEN_TO_BE_REPLACED

Proving once again that he is in touch with ordinary Americans, Donald Trump selected education for the first video message of his 2024 presidential … END_OF_DOCUMENT_TOKEN_TO_BE_REPLACED

What You Need to Know is Fauci retires from the Covid Industrial Complex! He’s sneaking out under the cover of Thanksgiving and a no-news week. He … END_OF_DOCUMENT_TOKEN_TO_BE_REPLACED

What You Need to Know is Ours is a Religious Nation. Phyllis Schlafly reminded us of this plain fact in her column on Christmas Eve 1982. Our founders … END_OF_DOCUMENT_TOKEN_TO_BE_REPLACED