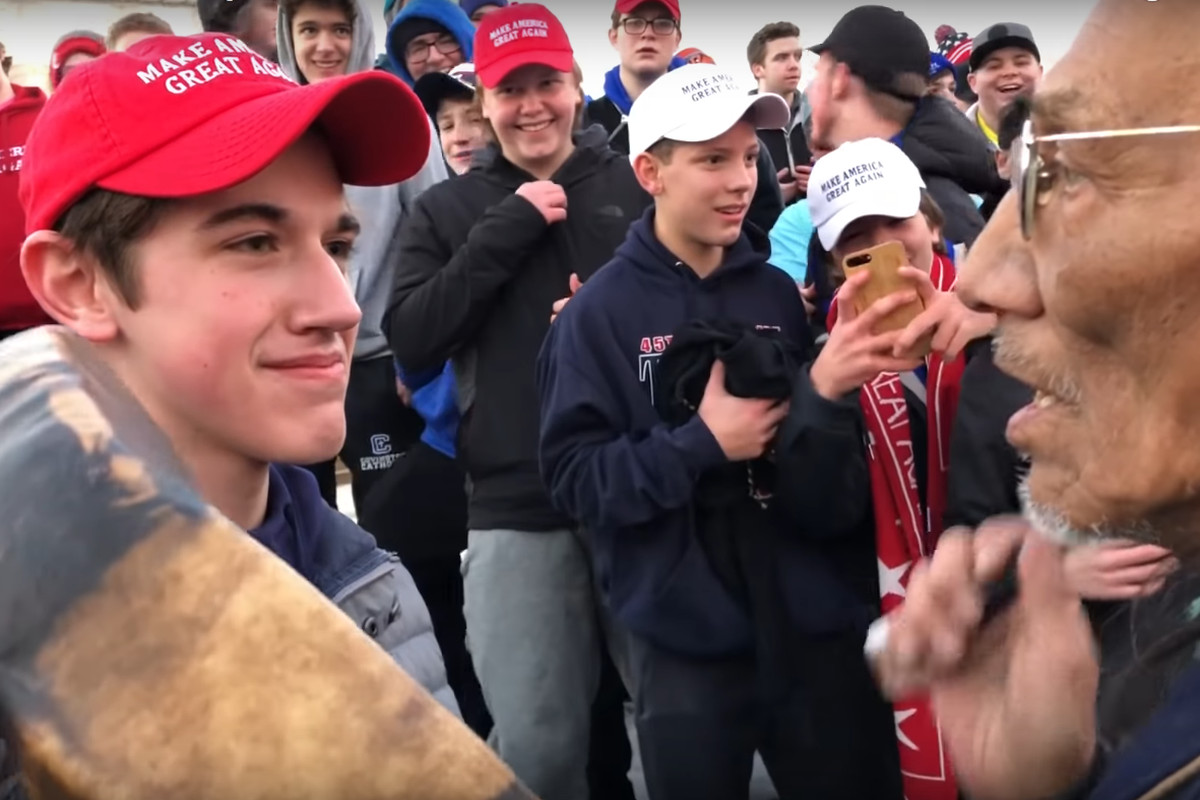 After attending the 46th annual March for Life in Washington, D.C., a group of young men from a Catholic high school in Covington Kentucky were rudely accosted while waiting for their bus pickup at the Lincoln Memorial. These aggressive protesters, who are even condemned by the leftwing Southern Poverty Law Center,  call themselves Black Hebrew Israelites. They taunted the boys for nearly an hour with vile insults against their pro-life, pro-Trump attire and their Catholic religion. 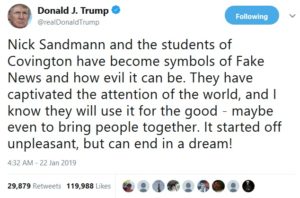 President Trump was not fooled by the fake news.

permission to sing their school cheers as a break from the protesters’ profanity. They remained admirably peaceful during this conflict. Then on the scene came an Indian “elder,” who invaded their space and began beating his drum right in the face of one of the high school students. To describe this Indian’s behavior as impolite would be an understatement.  If he was merely trying to defuse the situation, as he later claimed, why didn’t he beat his drum in the face of one of the real instigators?

The ultimate injustice then came to the students when the liberal media and even supposed “conservative” voices began to savagely criticize the boys, and with hardly any evidence! March for Life event organizers should have been the first to stand up for their own participants, but instead initially sided against the students.

Kentucky Republican congressman Tom Massie heroically defended his young constituents from the onslaught, but Democrats and many Republicans were far too quick to unjustly criticize the students. Many conservatives were forced to take back their comments after the truth emerged.

But President Trump was not fooled by the fake news.  He tweeted that “…the students of Covington have become symbols of Fake News and how evil it can be.” In a refreshing rejection of the guilty-if-the-media-says-so mindset of his critics, President Trump observed that the students “have captivated the attention of the world, and I know they will use it for the good.”

What You Need to Know about Modern Politics. In the last couple of days, the January 6th committee has run out of steam. Here are two things to … END_OF_DOCUMENT_TOKEN_TO_BE_REPLACED

What You Need to Know is Republicans cave on gun rights. Senate Republicans have put on full display the ruling class uniparty by compromising with … END_OF_DOCUMENT_TOKEN_TO_BE_REPLACED

Phyllis Schlafly Eagles · #WYNK: Montpelier is going Woke | May 19, 2022 #ProAmericaReport The following is a transcript from the Pro America … END_OF_DOCUMENT_TOKEN_TO_BE_REPLACED

Phyllis Schlafly Eagles · #WYNK: Who's Against Trump | June 13, 2022 #ProAmericaReport The following is a transcript from the Pro America … END_OF_DOCUMENT_TOKEN_TO_BE_REPLACED

Phyllis Schlafly Eagles · June 29 | Pro-Life Without Exceptions: Health of the Mother Empty emotional appeals are the only way for pro-choicers to … END_OF_DOCUMENT_TOKEN_TO_BE_REPLACED

“I never like to take credit for anything,” Donald Trump told a hostile reporter last month. “God made the decision,” he added recently about the … END_OF_DOCUMENT_TOKEN_TO_BE_REPLACED

What You Need to Know is Biden is marching toward America Last. Even as our continue to get entangled in NATO and their picking a fight with Putin. … END_OF_DOCUMENT_TOKEN_TO_BE_REPLACED