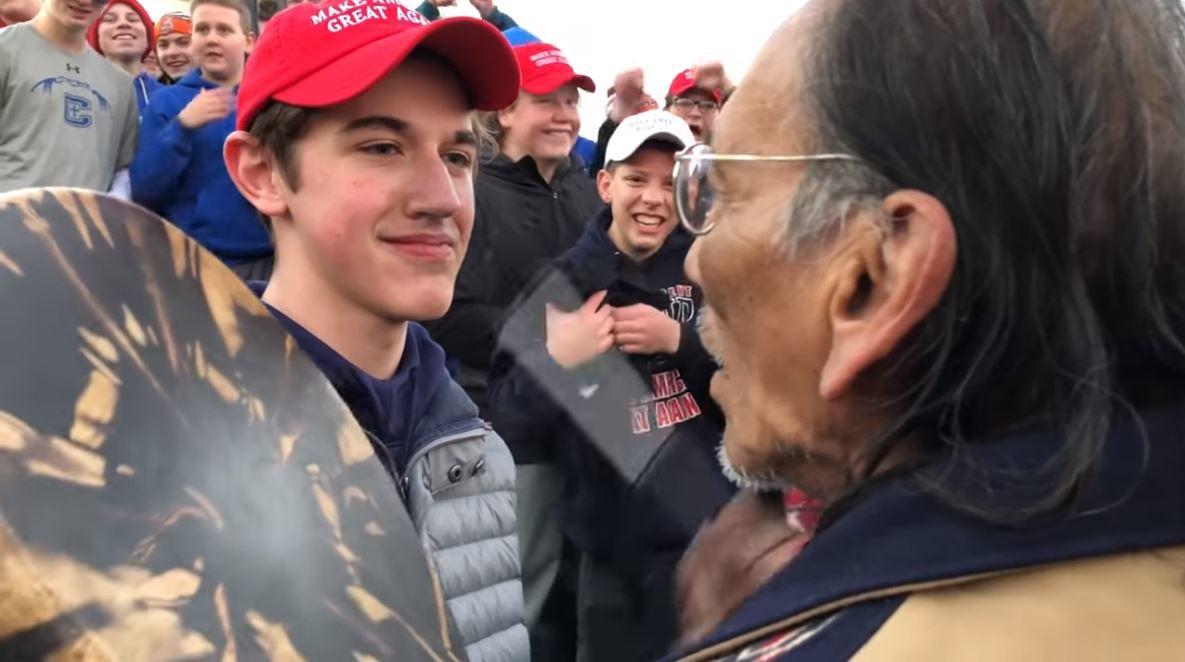 As Democrats announce their plans to run against President Trump next year, the partisan hysteria against the president grows more intense.  Opposition to Trump now justifies, in the eyes of some, a vicious drive-by smearing of innocent high-school boys wearing MAGA hats.

The students were attending the 46th annual March for Life in Washington, D.C., after riding the bus all night from Covington, Kentucky.  Despite the grueling 36-hour trip to D.C. and back, the boys were in high spirits, and their faces were ruddy from a day outside in the winter cold.

As they waited patiently at their designated pick-up location for the overnight bus back to Kentucky, the boys were rudely accosted by a group that even the leftwing Southern Poverty Law Center has condemned as “racist” and “black supremacist.”

The aggressive protesters, who call themselves Black Hebrew Israelites, taunted the boys for nearly an hour with vile insults against them and their Catholic religion.  The boys were singled out because they were white, Christian, and wearing President Trump’s favorite hat. 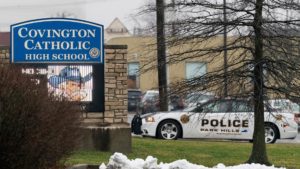 The Covington high school closed on Tuesday due to a torrent of threats.

Anti-Catholic taunts peppered the inhumane heckling, which has been underreported but can be found online.  Had those same insults been lobbed against any other ethnic or religious group, liberals would have defended the students.

The boys “turned the other cheek” throughout the unexpected encounter.  Eventually, they asked their adult chaperones for permission to sing their school cheers as a break from the protesters’ profanity.

Despite the vile insults hurled at them, the young men admirably remained polite and peaceful in response.  Then an Indian “elder” invaded their space and began beating his war drum right in the face of one of the high school students, who held the Indian’s gaze with a pleasant, peaceful smile.

To describe the behavior of the drum-beater as impolite would be an understatement.  If he was merely trying to defuse the situation, as he claimed later, why didn’t he beat his drum in the face of one of the anti-Trump instigators?

The ultimate injustice was then inflicted by the liberal media, which excoriated the boys nationwide.  Anti-Trumpers savaged the boys and their families on social media, to the detriment of the entire Covington Catholic High School including students who were not even there.

Kentucky Republican congressman Tom Massie heroically defended his young constituents from the onslaught, but Democrats and some Republicans were too quick to unjustly criticize the students.  Massie’s Democratic colleague John Yarmuth tweeted, “I am calling for a total and complete shutdown of teenagers wearing MAGA hats.  They seem to be poisoning young minds.”

Criticized for his call for unconstitutional censorship, Rep. Yarmuth then claimed it was merely a joke.  But he continued to pile on against the students from his own state of Kentucky, saying that “I believe these kids acted inappropriately, whether they were provoked or not.”

The full video revealed that the young men had acted properly throughout the afternoon.  But if the additional videos had not fortuitously emerged, the lives of these students could have been destroyed by the rush to judgment in the fake news media.

In a since-deleted tweet, Never-Trumper Bill Kristol decried “the behavior of #MAGA brats who have absorbed the spirit of Trumpism.”  Other Republicans, such as those running the once-conservative National Review, were also incredibly harsh in their criticism of the young men in posts that were later removed.

President Trump was not fooled by the fake news that smeared the young men.  He tweeted that “Nick Sandmann and the students of Covington have become symbols of Fake News and how evil it can be.”

In a refreshing rejection of the guilty-if-the-media-says-so mindset of his critics, President Trump observed that the students “have captivated the attention of the world, and I know they will use it for the good.”  He added that this unfair treatment of the students may help “even to bring people together.”

The March for Life leadership disgracefully abandoned these volunteers who attended at significant hardship.  The event organizers should have been the first to stand up for their own participants, but instead initially sided against the students.

The Covington high school closed on Tuesday due to a torrent of threats.  Meanwhile, the Catholic diocese there fanned the flames of injustice by initially posting a statement threatening expulsion of the boys and even apologizing to the Native American activist who beat his drum relentlessly in a student’s face.

The Mayor of Covington should have stood up for the students from his own area.  Instead, he referred to the conduct by the students as somehow being “appalling.”

What You Need To Know is January 6th has been politicized. Andrea Kaye, guest host of the #ProAmericaReport, talks about January 6th as we go into the … END_OF_DOCUMENT_TOKEN_TO_BE_REPLACED

What You Need to Know about Looking for Joy in Impossible Situations! We should look for Joy in situations not just around Christmas but all year … END_OF_DOCUMENT_TOKEN_TO_BE_REPLACED

What You Need To Know about Biden’s worst week as President. Andrea Kaye, guest host of the #ProAmericaReport, explains how this has been the worst … END_OF_DOCUMENT_TOKEN_TO_BE_REPLACED

What You Need To Know is common sense is being thrown out the window. Guest host Andrea Kaye explains that In Missouri, there are lines of people … END_OF_DOCUMENT_TOKEN_TO_BE_REPLACED

What You Need to Know why being bipartisan isn’t enough to save our American republic. Producer Noah Dingley talks with speaker and coach William … END_OF_DOCUMENT_TOKEN_TO_BE_REPLACED

What You Need to Know about the Drums of War. The drums of war are being pounded by media and Biden - don't fall for it! More and more American … END_OF_DOCUMENT_TOKEN_TO_BE_REPLACED

What You Need to Know is Biden is not really President! Joe Biden isn’t acting like a President, he acts like he’s still a Senator, not leading just … END_OF_DOCUMENT_TOKEN_TO_BE_REPLACED

What You Need to Know is being pro-life means we have to drain the swamp. When you take a look at the abortion industry, all you have to do is follow … END_OF_DOCUMENT_TOKEN_TO_BE_REPLACED

The dramatic exit last Friday by Rep. John Katko (R-NY), who announced he would not run for reelection, may have shocked liberals but was no surprise … END_OF_DOCUMENT_TOKEN_TO_BE_REPLACED

What You Need To Know is this crime wave is intentional. Guest Host Andrea Kaye describes disturbing reports about a massive crime rate and murder … END_OF_DOCUMENT_TOKEN_TO_BE_REPLACED

If the education establishment wants to know why public schools don't get much respect from our citizenry, they need look no further … END_OF_DOCUMENT_TOKEN_TO_BE_REPLACED

Robert Strange McNamara belongs on the daytime soap operas. Better yet, his histrionics belong on Donahue or Geraldo or Sally Jesse Raphael. We are … END_OF_DOCUMENT_TOKEN_TO_BE_REPLACED