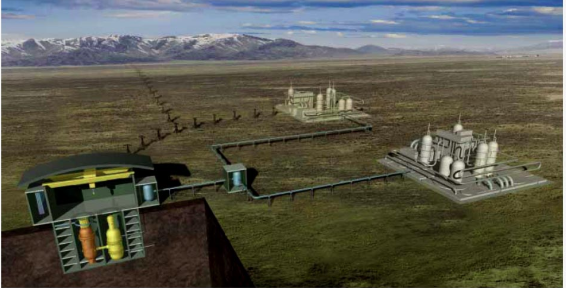 Mark Schneider is a nuclear futurist and the president of Gen IV Nuclear, Inc. He has a bachelor’s degree in Nuclear Engineering Technology and spent twenty years working with advanced, small-scale reactors within the U.S. Naval Nuclear Power Program. Mark dedicates himself to educating the public about the implications of Gen IV nuclear technology.

Here is what radio host Peter Whelan had to say about “What to Know about Gen IV Power” — using Gen IV (4) Nuclear by Mark Schneider as a supporting source — on his April 22, 2019 “What to know” WTK Canadian radio show. Other supporting sources used were:

Imagine a technology that eats nuclear waste and atomic weapons for fuel.

Imagine that it’s the safest method of power generation.

What if every person on the planet can have it?

That’s what the family of Generation 4 power technologies can deliver.

But we can’t raise the supply of renewables fast enough to meet all our needs by 2030. Hydro-dams are protested and delayed every time we try to build one.

Solar occupies a lot of space and it only works during the day, the wind doesn’t blow all the time, we need safer, more efficient designs for wind turbines.

Generation 4 nuclear power is designed to safely shutdown if anything fails.

Gen 4 is the only solution we have that is quickly scalable to billions of people, carbon-free, and always available.

Along the way we’ll end up with cheap, clean, abundant energy.  We can use that to desalinate ocean water, providing clean fresh water to everyone. Gen 4 can be built next to existing nuclear plants (CANDU) so nuclear waste can be recycled as fuel. That handles the transportation and storage problem. The power distribution lines are already there.

It’s not the final solution. Nuclear power is not renewable, but we have enough uranium today to meet all our needs for at least ten thousand years, experts say closer to a million years.”

Mark vouches for nuclear as clean energy as the #GreenNuclearDeal. As Mark related, “The biggest concern is what to do about nuclear waste. Our present reactors (light water reactors) use only 2 to 3% of the nuclear fuel put into them because of design inefficiency; the rest becomes waste.”

In Gen IV nuclear technology, as explained by Schneider, waste from present reactors becomes fuel. The Gen IV energy generation process also gets rid of any waste faster than would normally happen, and at the end very little waste remains.

As far as the Gen IV technology, Schneider indicated how the technology has existed for a long time. An example given was of EBR1 which ran off plutonium. At present time only light water reactors are in operation here in the U.S.

As to why the public is so skittish about nuclear power, many believe that nuclear reactors can become nuclear bombs, as they saw happen at Fukushima in Japan and Russia’s Chernobyl; however, the mishaps, as Schneider explained, occurred because both reactors used water to cool the fuel was the source of the explosion.

It was interesting to learn why this nation chose water cooled reactors when other reactor designs were available in the 1950’s and 60’s.

It was due to the influence of Admiral Rickover, known as the “Father of the Nuclear Navy.” During the 1950’s and 1960’s Mouton salt reactors could have worked in the Navy. All Navy submarines and aircraft carriers are powered with light water reactors.

As to why there is a problem about nuclear waste, Schneider spoke of how Carter in the 1970s had banned the reprocessing of spent fuel. Regulations also factor in, such as the government saying “no” to the use of plutonium as fuel. Then too, Yucca Mountain for waste storage became a political issue, even after extensive search found Yucca to be safe and acceptable.

Work is now proceeding to scale back regulations so the new Gen IV generation of nuclear reactors can be licensed by the NRA. Secretary of the Department of Energy Rick Perry was cited as a good spokesman for Gen IV technology.

As to reducing our dependency on fossil fuels, Mark spoke about new, existing carbon capture technology which is growing, where we could use the excess heat from nuclear plants to extract CO2 from the air and create “fossil fuels.” The waste left over from generating power from the Gen IV reactors could be used for other applications, such as medicine and nuclear batteries.

As to why we aren’t now doing this is because fear exists in industry of the new technology. This is irrational because the old light water reactor plants were designed before computers existed. We now have computer modeling to ensure safety.

What about public fear? After all, how could something so toxic as nuclear power be so good? But as Schneider noted: “Nuclear power is the safest form of energy. 2nd is solar power. The death per Terawatt-hour has been .01 deaths in U.S. from nuclear; 3 in solar.”

As to radiation in the Harrisburg, PA Three Mile Island accident, “the radiation people received amounted to a total of one dental X-ray worth of radiation or about 3 mrem.  A CT medical scan is worth 1000 mrem of radiation for one scan. In 21 years of operating nuclear reactors, Mark has received 255 mrem.  He  has no fear of cancer.

The 2020 new design reactors are of small modular design. They can be built at 1/5th or 1/7th of the cost. They can be built in factories. They can adapt fast to power change. They last 30 to 40 years. They can be placed at sub-stations, so if the power grid should shut down for any reason, power would continue without interruption.

Read here of the amazing facts set forth at Gen IV Nuclear “101”. Among them:

To view the gallery of Phyllis Schlafly’s Eagle Council pictures, go to EagleCouncil.com. You can order recordings of the events by going to an online store at PhyllisSchlafly.com/store.

Phyllis Schlafly Eagles · April 29 | When Will We Cancel Darwin? For those of you who haven’t heard, cancel culture is the latest trend among … END_OF_DOCUMENT_TOKEN_TO_BE_REPLACED

What You Need to Know is American drug overdose deaths hit a new record. We are up to 107,000 Americans who have died in the last year because of … END_OF_DOCUMENT_TOKEN_TO_BE_REPLACED

For Immediate Release: May 11, 2022Contact: Ryan Hite, Communications Director Staggering 8.3% Inflation Can Only Be Blamed On Biden's Broken … END_OF_DOCUMENT_TOKEN_TO_BE_REPLACED

Phyllis Schlafly Eagles · May 10 | Politicians Are "Tossed To and Fro" on Energy Policy Ephesians 4:14 in the Bible calls for Christians … END_OF_DOCUMENT_TOKEN_TO_BE_REPLACED

Biden’s Plan to Buy Votes  As the midterm elections fast approach, Democrats have lost a key demographic that they relied on in 2020: … END_OF_DOCUMENT_TOKEN_TO_BE_REPLACED

For Immediate Release: May 16, 2022Contact: Ryan Hite, Communications Director The Power of Grassroots Is Surging and Winning All Across the … END_OF_DOCUMENT_TOKEN_TO_BE_REPLACED