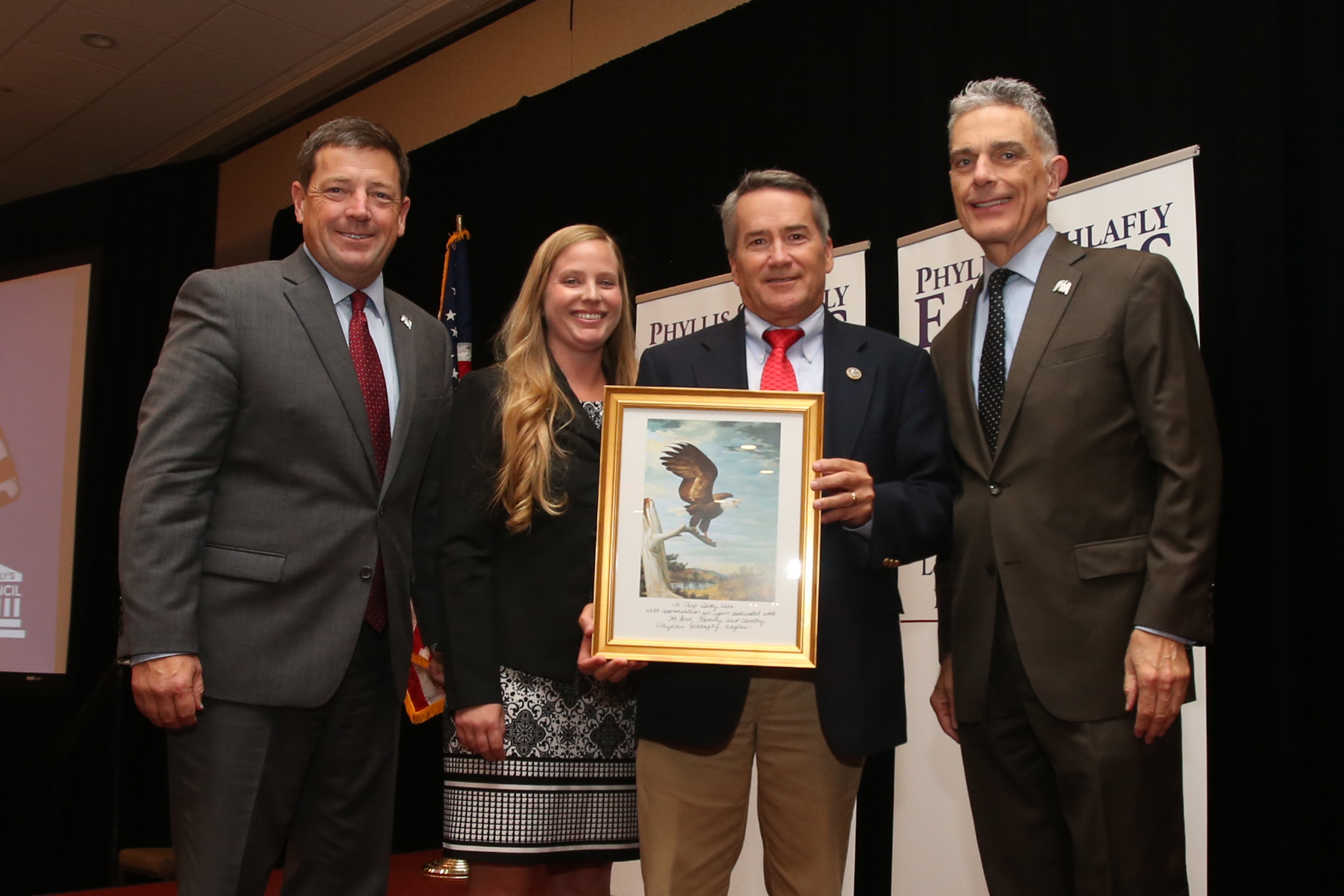 After much thought, I decided to write a follow-up article featuring six more Eagle Council speakers, three Republican Freedom Caucus members serving in the U.S. Congress and three book authors who had much to say about the drifting of our nation away from its founding principles to where the voice of reason has been replaced by insanity.

U.S. Republican Congressmen Jody Hice, Andy Biggs, and Steve King are not only Freedom Caucus members who support open, accountable and limited government, the Constitution and the rule of law, and policies that promote the liberty, safety and prosperity of all Americans, but all three are likewise involved in defending the life issue.

Rep. Jody Hice (GA-10) presented the Keynote Address on Saturday, September 14th, at the “Life of the Party Luncheon.”  He served as a pastor before going into politics.

Said Hice: “What we need is a spiritual awaking.  Without morality and Christianity our country cannot succeed.  They are indispensable.  Our Constitution was written for a moral and religious society.  It can’t exist in a secular society, for there must be an understanding of what is right and wrong.”

It is Hice’s conviction that Roe v. Wade will be overturned, and the issue will go back to the states. As Hice bemoaned, “New York and Virginia are fine with post-birth abortions, meaning it’s fine to kill a baby after it’s been born.”  25 states have either passed or introduced the Heartbeat Bill.

As to the Born Alive Bill, Nancy Pelosi will not allow it to be brought to the House floor, even though 15 Democrats have signed on to the bill, making it bipartisan. Hice was pleased that $60 million dollars of taxpayer money has been pulled from Planned Parenthood, who admitted to harvesting and selling baby parts.  As Hice indicated: “The death of a child should be a travesty, not an industry.”

Rep. Hice, in noting that James Garfield was the only president who was a pastor, then shared this Garfield quote:

“Now more than ever before, the people are responsible for the character of their Congress. If that body be ignorant, reckless, and corrupt, it is because the people tolerate ignorance, recklessness and corruption.”

Rep. Steve King (Iowa-4th) was not listed on the official Eagle Council program because his commitment to speak was not confirmed until after the program had gone to the printer, but King likewise spoke, following Hice, on Saturday, September 14th, at the “Life of the Party Luncheon.”

Rep. Steve King is the sponsor of the Heartbeat Bill in Congress, for which he has been viciously attacked.  As King related, the Heartbeat Bill, as defined, is a bill at the federal or state level to make abortion illegal once doctors detect an unborn child’s heartbeat. Since a fetal heartbeat can be detected between 6 and 12 weeks of pregnancy, if enacted in every state, heartbeat bills would save nearly 1 million children per year. So far Heartbeat Bills have been passed in 6 states this year. 9 other states introduced the bill during the 2019.

Reps. Andy Biggs (AZ-5) spoke at the God, Family, and Country Dinner on Saturday, Sept. 14th.  Before Andy spoke, his wife, Cindy, was honored with the presentation of the Full-time Homemaker of the Year Award by Hon. Helen Marie Taylor, Chairman; Ed Martin, President; and John Schlafly, Treasurer.

Rep. Biggs told a poignant story as to how he had met his wife on a blind date in Tucson.  It was love at first sight. As Biggs related, upon asking Cindy to marry him, she declined because she had a great job and enjoyed living at home with her family, but a month later she acquiesced. Andy and Cindy were married on December 13, 1980. Forming a union of marriage, a covenant, Mike and Cindy have been happily married for 38 years. The Briggs have seven children, six of them living, and five grandchildren.

In what was an emotional and heart-felt presentation, their fourth child and the Biggs’ second daughter, Jenell, spoke glowingly about her mother and the sacrifices she had made throughout the years as a mother and spiritual leader in the home.

After the presentation, Rep. Biggs spoke  about what is going on in Congress, criticizing the current spending bill. Biggs related how there isn’t the political appetite to shut government down again.  Biggs then discussed the recent Democrat-led House Judiciary Committee’s mark-up of several new gun control bills introduced earlier this year.  The Senate wants to do watered down versions of the bills, but Biggs hopes Trump doesn’t sign on to any of these anti-gun rights bills.

Biggs also had something to say about the fake hearing with fake rules to impeach President Trump.  After 4 years of fake Russian investigations, Trump and his administration are still being emasculated for things he never did, but which instead can be traced to the other side.

Some good news presented by Biggs was that the fence is starting to be constructed in Arizona; 150 federal judges have been approved; we are fighting China as an adversary; and Trump remains the most pro-life president ever.

As a defender of the family, Dr. Loudon home-schooled her children in the office of her husband, a former Missouri state senator John William Loudon. She was an official spokesperson for Donald Trump during his campaign in 2016, is on Trump’s campaigns media advisory board, is the co-chair of Women for Trump, and is the current face of Citizen Voters Inc. In the past Gina has hosted both a radio (the Dr. Gina Show) and TV show. She considers TV just a soundbite, while radio is more authentic because you can complete your thoughts. Gina now lives in Florida, although she misses the Midwest. Gina’s mentor was Phyllis Schlafly.

According to Dr. Loudon, a person is known “by their fruits.” She has gotten to know the Trump family and thinks highly of them, although she doesn’t agree with the family on every political issue.

Warned Loudon: “The Democrats are now circling the wagon. We must stand behind Trump, as this is the most epic battle of our political life. The media has changed dramatically. We must have a battle plan.”

Gina’s book is not about the crazy Trump as defined by the Left, but the stable, genuine Trump, unlike crazy Bernie and Elizabeth, whose great-grandfather fought two wars in Florida killing American Indians.

Crazy as defined by Loudon:

Dr. Everett Piper, president of Oklahoma Wesleyan University, is the author of a viral blog post garnering 3-1/2 million views, that appeared on the university’s website entitled “This Is Not a Day Care. It’s a University!” In the post Piper wrote that “Oklahoma Wesleyan is not a “safe place” but “a place to learn.”  Although Dr. Piper had been writing op-eds for 10-12 years, this blog post resulted in much negative push-back from his peers.

Out of this essay (blog post) came Piper’s book with Bill Blankschaen, Not A Day Care: The Devastating Consequences of Abandoning Truth, which takes a hard look at what is happening around the country, providing an analysis of the growing problem of entitlement on college campuses. It is also a timely examination of the “special snowflake” students that are stepping into classes.

Dr Piper recommended that university officials eschew pandering to the special snowflakes, instead offering them guidance in both an expansive education and morality.

Piper has personally dealt with these special snowflakes in his capacity as a college professor and as the president of Oklahoma Wesleyan University. At both public and private universities, said Piper, “students are permitted to allow their feelings to dictate teaching and disciplinary policy on campus. This, in turn, creates a problem as places of higher learning are transforming from educational institutions into daycare centers that coddle their students instead of preparing them for the real world.”

This book is a must read. Piper called for schools to return to the true mission of what used to be considered “higher education”, but he also gives clear direction for how parents and teachers can take a decisive role in ensuring that our next generation is equipped to take on the world and make a positive difference.

Timothy S. Goeglein, Vice President of External Relations for Focus on the Family, and Craig Osten, Vice President and Senior Director of Research and Grant Writing at Alliance Defending Freedom, wrote together American Restoration (How Faith, Family, and Personal Sacrifice Can Heal Our Nation).

Examined is every aspect of American culture. This nation has hit the proverbial fork in the road. We can continue to go down the road of social strife and despair, or we can choose the road that leads us back to the founding principles of life, liberty, and the pursuit of happiness, which our nation’s founding fathers spoke of so eloquently in the Declaration of Independence.

Called for by Goeglein is the renewal of our culture. This calls for a sweeping change in the unspoken assumptions about good and evil, family and the arts, and all the other facets of morality and social life.

The book is divided into 15 chapters, each of which begins with the word “restoring”, as in Restoring America’s Founding Principles, Restoring Religious Liberty, Restoring Civility, and so on.

Goeglein spoke about how this nation has strayed from the foundation of American public and private life through the gradual acceptance of casual immorality, the debasement of human dignity, statism as an alternative to Judeo-Christian faith, and broad incivility in the media, politics, the art and social relations. 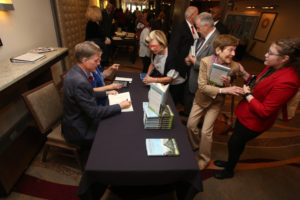 The Founders, noted Goeglein, argued extensively that “unless we wisely govern ourselves, our inner lives and our external behaviors, we will be unable to sustain political self-government corporately.”

As such, said Goeglein: “Christian morals upon which the nation was based remain the most solid foundation.  Only a re-engagement with those moral foundations will allow us to build too new heights.”

Forthcoming articles from Nancy Thorner about Phyllis Schlafly’s Eagle Council XLVIII will feature Mark Schneider, president of Gen IV Nuclear and Alex Newman, author and journalist, who spoke about rescuing our children and our nation.

Videos from Eagle Council are being posted here as fast as possible here at the Phyllis Schlafly Eagles You Tube channel.

What You Need to Know is how the Narrative Machine skewed the 2020 election. From Elon’s documents dumps, we now have concrete information that the … END_OF_DOCUMENT_TOKEN_TO_BE_REPLACED

What You Need to Know is how lame the Lame Duck session is. For all of November and December, there are several dangerous public officer holders who … END_OF_DOCUMENT_TOKEN_TO_BE_REPLACED

What You Need to Know is about the ethics of power, not the ethics of truth. That's the political situation we are facing! The left pursues power no … END_OF_DOCUMENT_TOKEN_TO_BE_REPLACED

What You Need to Know about the Projection Racket. What is the projection racket? It’s when the left and media work together to project onto their … END_OF_DOCUMENT_TOKEN_TO_BE_REPLACED

For Immediate Release: October 6, 2022Contact: Ryan Hite, Communications Director After Reporting a Mom to Her Law Enforcement Employer and the … END_OF_DOCUMENT_TOKEN_TO_BE_REPLACED

What You Need to Know about the Red Tsunami! Turnout for the November, 8th, 2022 midterm election will be high. Be on the lookout for fraud. But we … END_OF_DOCUMENT_TOKEN_TO_BE_REPLACED

What You Need to Know is Democrats’ plan to slow down GOP investigations. David Brock (of Media Matters) released a memo detailing a group that will … END_OF_DOCUMENT_TOKEN_TO_BE_REPLACED

What You Need to Know is why Trump is not an echo of other candidates before him. Phyllis Schlafly famously first used that phrase — a choice, … END_OF_DOCUMENT_TOKEN_TO_BE_REPLACED

What You Need to Know is why Trump is not an echo of other candidates before him. Phyllis Schlafly famously first used that phrase — a choice, not an … END_OF_DOCUMENT_TOKEN_TO_BE_REPLACED

Phyllis Schlafly Eagles · December 2 | The Past, Present, and Future of the War on Christmas Haul out the holly and bring out the boxing gloves. … END_OF_DOCUMENT_TOKEN_TO_BE_REPLACED

Phyllis Schlafly Eagles · December 9 | Are Supporters of America First Scrooges? It’s going to be a long, cold winter in the United States, but … END_OF_DOCUMENT_TOKEN_TO_BE_REPLACED

Phyllis Schlafly Eagles · December 8 | Is It Criminal to Question Elections? Prosecutors in Fulton County, Georgia have made it their mission to … END_OF_DOCUMENT_TOKEN_TO_BE_REPLACED