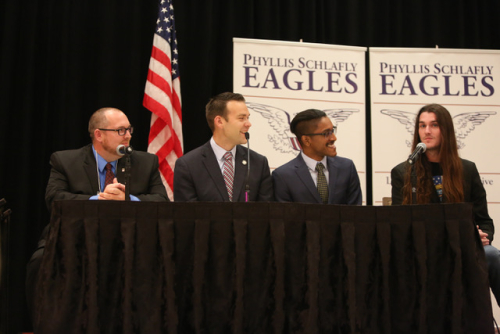 Phyllis Schlafly’s 48th Eagle Council was held on September 13-14-15, 2019 at the Marriott St. Louis Airport, Saint Louis, Missouri. Eagle Council is the annual conference for supporters of Phyllis Schlafly known as “Eagles”, because Phyllis adopted the American bald eagle as her personal emblem and as the symbol of her leadership in politics and public affairs.  Ed Martin serves as president.  John Schlafly is treasurer, and Honorable Helen Marie Taylor is chairman of the board. See here the official Phyllis Schlafly website.

Eagle Council XLVIII was presented by Phyllis Schlafly Eagles, Eagle Forum Defense Fund, and Eagle Trust Fund.  There were four co-sponsors: The Gateway Pundit, Human Events, Project Pro America, and Gen. Jack Singlaub’s America’s Future.  300 plus dedicated patriots and supporter of Phyllis Schlafly and her revered organization attended this year’s Eagle Council. Phyllis passed away on September 5, 2016, but it was Phyllis who introduced candidate Donald Trump to the present conservative pro-life Republican platform, which Trump adopted and is now carrying out in his administration.

There were 43 speakers, who covered topics that were of great importance to those gathered, as they related to current political concerns and happenings. Issues covered included the state of education, especially the failure of Common Core; climate change and the push for green energy vs nuclear energy; the threat posed by Communist China; pro-life issues and the Heartbeat bill; the Russian collusion hoax; Trump’s foreign and economic policies; illegal immigration and cross-border migration from the Islamic World; turning out the Christian vote; U.S. patent policy; Freedom of Speech; and the use of social media in Trump’s America..

I arrived on Friday morning, Sept. 13, for a 12:00 noon registration, but was immediately thrust into what would be a continuous, whirlwind cycle of events occurring in mostly half hour segments, during which time individual speakers were slated or a panel composed of several speakers. In addition, speakers were often scheduled to speak while breakfast, lunch, and dinner were being served. There were also evening workshops to attend. Although the days were long, the knowledge I gained from attending has given me the know-how and the ammunition to prepare myself for what lies ahead.

The initial offering after my Friday noon registration was a 12:30 p.m. session not previously announced or even noted on my schedule of activities. Gary Marx, Chief of Staff to Ralph Reed, spoke about judicial nominations and confirmations.  Marx stated how success is finally starting to reveal itself against judicial activism, given Trump’s two appointments to the Supreme Court, Neil Gorsuch and Brett Kavanaugh. Marx further predicted the possibility of more Trump Supreme Court justices in his second term.

A total of 152 judges have been appointed, with many more ready to process at the District Court level. With 13-1/2 Circuit Courts across this nation, some circuit courts have flipped from Democrat to Republican through Trump’s appointments. The Second, Third, Fourth, and Eleventh Circuits, whose territory ranges from Vermont to Florida, could all soon have a majority of Republican appointees.

Even the Ninth Circuit, which has stymied Trump’s orders on immigration and environmental policies, is within striking distance of flipping its seats to a majority of Republican appointees. The 9th now stands at 16-13. Since there is random draw system as to which judges will preside over any given case, the 9th is no longer a sure win for Democrats.

For the remainder of Friday afternoon into the late evening, I was involved in a whirlwind of activity, beginning with a 2:00 p.m. welcoming by the Hon. Helen Marie Taylor, Chairman; Ed Martin, President; and John Schlafly, Treasurer.

Starting at 2:15 p.m., among the speakers I was privileged to hear were Ralph Reed, Stephen Moore, Pamela Geller, and Steve Bannon, a late addition to the speaker list.

Dr. Ralph Reed, founder and chairman of the Faith & Freedom Coalition, spoke first, but prior to hearing Reed’s message about “Turning Out the Christian Vote in 2020”, Reed was honored with the presentation of the Phyllis Schlafly Award for Excellence in Leadership by Ed Martin and John Schlafly. Gary Marx participated in the ceremony. Having known Reed for over 20 years, words used by Marx to describe Reed were patriot, faith leader, strategist, grassroot leader, author, and a husband of 32 years.

Dr. Reed began his remarks by reminding his attentive audience that “we were here at a unique moment in time as we face the most important election of our lifetime.” Reed then went on to talk about Napoleon, who acknowledged that the spiritual and the moral were more powerful than the mass of an army, known as “will applied to force as a force multiplier.” As Reed suggested: We must have an army fired up with moral courage because Democrats are determined to win, as they did in CA in the midterm election through ballot harvesting, where 6 out of 7 Republicans lost even though they were winning when the polls closed. Democrats will say anything to win. There is no law they will not break. Words such as concede, lose, defeated, or quit are not in their vocabulary.  They will destroy reputations at will.”

Knowing yourself and knowing your enemy is important to Reed, as it is in any military strategy. If you don’t define yourself, the enemy will define you.

For Dr. Reed, grassroots win elections, not money.  Knock on doors to get your message out. Ignore the polls. Sonny Purdue was losing 50 to 37, yet he won by 8 points.

Most of all, said Reed, “We need to pray.” “God is on the throne.  He’s in charge, and we are called to be faithful.  He will never let us down.  Make sure that can be said of us.”

As remarked by Mr. Moore, the economy is now good because Obama is no longer in office. There is small business optimism, and consumer confidence is high.  71% of American rate the economy good or great under Trump.  It’s not true that Trump isn’t president of the working class.  He had the “magic wand” to create 1.4 million blue collar jobs.  As to calling Trump a racist, how can Trump be a racist when unemployment among Hispanic and blacks is the lowest in 50 years?

In addition: Stock Market at record high; over 60% of households hold stocks; regulations were slashed; tax rates were lowered which increased revenue; energy production was revived – PA and Ohio are now major producers of natural gas; we have the best environmental record of any other nation despite getting out of the worst climate deal ever, the Paris Accord; and our tariffs on China for fair trade are killing China.

In talking about education and healthcare, our biggest costs, Moore related how government control doesn’t bring prices down.  It is free market capitalism which we can only get under President Trump.

Pamela Geller, founder, editor, and publisher of The Geller Report and president of the American Freedom Defense Initiative and Stop Islamization of America, expressed her dismay that 20 years after 9/11, the largest attack ever on American shores, not one movie has been made about 9/11.

Speaking about the silencing of free speech, Geller noted how criticizing Muslims will lead to being labeled an Islamophobic.  As Geller said, “descent is not tolerated, only tolerance of Muslims is permitted. If a group that cannot be criticized is permitted to work its will, that group will rule.”  Geller then made this surprising statement when suggesting that the FBI knew about the 9/11 plot and was part of the plan.

As Geller stated: “We must stand with courage or we will lose our society.  Trump has unmasked the Democrat Party.  Reason and reality will determine the course of history.  Refusal of the radical left to accept an election, warned Geller, could led to a civil war.”

A Friday afternoon panel discussion,  Social Media in Trump’s America, spotlighted Jack Posobiec of One America News; Scott Presler (#ThePersistence) who recently led nearly two hundred volunteers on a clean-up day in Baltimore removing twelve tons of trash; Ali Alexander, and Carpe Donktum, a memesmith, whose Trump meme videos are a delight to watch.  Here is a meme by Donktum that you will like.

In speaking about Trump, Bannon noted how Trump has taken on China, North Korea, Iran, Turkey, and Pakistan. As Bannon said:  “You haven’t seen anything yet if Trump gets 5 more years as president.” Bannon predicted that Trump will be remembered as the best president in American history. It is  providential that Trump is now president.

Bannon is working to get the wall built with Kris Kobach, general counsel of the privately-funded We Build the Wall Project.  Kobach also spoke at Eagle Council.

Mr. Bannon brought with him a movie he produced, set for September release, based on the arrest of Huawei CFO Meng Wanzhou. It exposes the Chinese tech giant’s lies and political intimidation. I ended my first day at Eagle Council previewing this powerful film, Claws of a Dragon.  View here its trailer.

To view the gallery of Phyllis Schlafly’s Eagle Council pictures, go to EagleCouncil.com. You can order recordings of the events by going to an online store at PhyllisSchlafly.com/Store.

More will follow about the powerful speakers and outstanding events that made this year’s Eagle Council XLVIII a stellar and noteworthy event.  Stay tuned.

“I never like to take credit for anything,” Donald Trump told a hostile reporter last month. “God made the decision,” he added recently about the … END_OF_DOCUMENT_TOKEN_TO_BE_REPLACED

What You Need to Know about Modern Politics. In the last couple of days, the January 6th committee has run out of steam. Here are two things to … END_OF_DOCUMENT_TOKEN_TO_BE_REPLACED

What You Need to Know is to Be Vigilant, Active, & Brave. We just finished our annual Collegians Summit. It was a great event where we had … END_OF_DOCUMENT_TOKEN_TO_BE_REPLACED

What You Need to Know is Biden is marching toward America Last. Even as our continue to get entangled in NATO and their picking a fight with Putin. … END_OF_DOCUMENT_TOKEN_TO_BE_REPLACED

Phyllis Schlafly Eagles · June 28 | Pro-Life Without Exceptions: Rape and Incest The biggest enemy of the pro-life movement cannot be found among … END_OF_DOCUMENT_TOKEN_TO_BE_REPLACED

What You Need to Know is it’s a Time for Choosing Again — time to choose life! In the wake of the Dobbs decision, the left is sneakily … END_OF_DOCUMENT_TOKEN_TO_BE_REPLACED