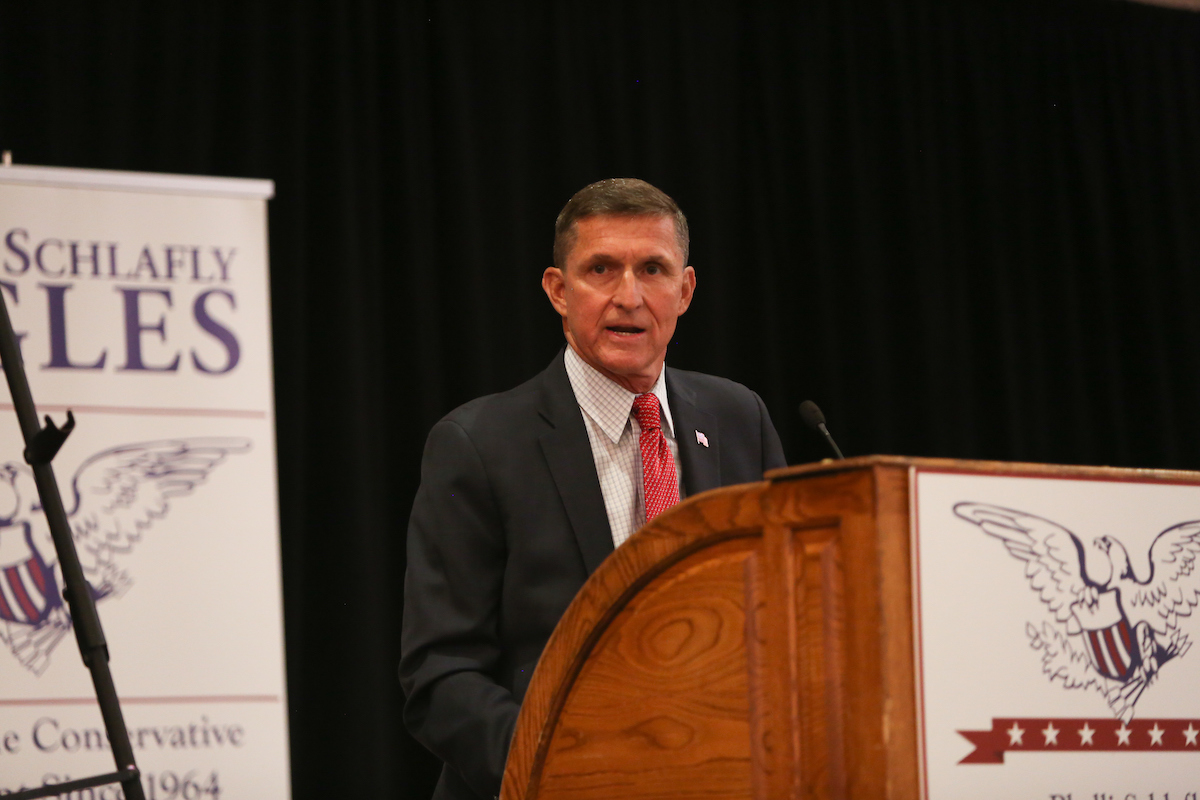 On Monday, September 17, 2008, the day after I returned home from attending Phyllis Schlafly’s Gateway Eagle Council XLVII, after having just met and spoken with General Flynn and his family, I heard the news that Robert Mueller was ready to sentence Flynn on or around November 28, 2018. Flynn resigned — after 24 days as Trump’s national security adviser — when it was revealed he misled the FBI and Vice President Mike Pence about the nature and content of the communications he had with the Russian ambassador at the time, Sergey Kislyak in December 2016 during Trump’s presidential transition.

Despite the trials General Flynn is enduring via Special Counsel Robert Mueller, he was on hand in St. Louis last weekend, calling on conservatives at the Gateway Eagle Council to stand together as “champions of freedom.”

What is Eagle Council?

Eagle Council was started by conservative icon Phyllis Schlafly in 1968.  It has become the place to be to equip yourself to speak out on the issue you care about most.  This year’s Council tackled top issues of the day, attracted nationally known speakers, provided practical training, held in-depth workshops featuring expert panels and gave like-minded individuals a chance to network nationally.

This year’s Phyllis Schlafly’s 47th Gateway Eagle Council was held September 14-15-16, 2018 at the Marriott St. Louis Airport, Saint Louis, Missouri.  Jim Hoft, the “Gateway Pundit,” partnered this year with Eagle Council.  Although ANTIFA showed up to protest outside of the Council event, two who paid to get inside the event to shout were quickly removed by security. Over 600 attendees joined Gateway Eagle Council XLVII over its three-day event.

The Major General John K. (Jack) Singlaub Dinner was the theme for the first night of Council on  September 16. During the dinner Lieutenant General Michael Flynn was presented with the Major General John K. (Jack) Singlaub Award for Service to America. Major General John K. Singlaub, U.S. Army (Ret.), enjoyed a long and distinguished military career, dating back to World War II.  After being recruited by the Office of Strategic Services (OSS), he parachuted into Nazi-occupied France as a covert operative to prepare the French Resistance fighters for the D-Day invasion. Following the war, General Singlaub headed CIA operations in Manchuria during the Chinese Communist revolution, served as supreme commander of all U.S. troops in South Korea, and performed intelligence missions in Vietnam.

Under Trump, Flynn briefly served as National Security Advisor of the United States.  Flynn resigned, after 24 days as Trump’s national security adviser, when it was revealed he misled the FBI and Vice President Mike Pence about the nature and content of the communications he had with the Russian ambassador at the time, Sergey Kislyak in December 2016 during Trump’s presidential transition.

The quote by General Flynn in his book, The Field of Fight, is  one of many reasons Flynn is a threat to the massive intel community and was targeted for removal from the Trump administration by Mueller and the traitorous partisan ilk within the FBI.

We’re in a world war against a messianic mass movement of evil people, most of them inspired by a totalitarian ideology, Radical Islam. But we are not permitted to speak or write those two words, which is potentially fatal to our culture.  —The Field of Fight by Lt. General Michael T. Flynn

As the Trump’s National Security Adviser (NSA), Flynn’s legal phone conversations with Russian Ambassador Sergei Kislyak were taped and leaked to media. Those conversations were perfectly legal.  As the NSA, it was entirely reasonable that he discussed policy with representatives of other governments — and Flynn was getting calls from all around the world.  These calls were made one month prior to Trump’s inauguration.  The people who recorded these conversations and leaked them to the press should be the ones up for federal charges.

While Flynn did not deny the Kislyak conversation, which was entirely legal, he denied discussing sanctions with the Russians. Mueller charged him with lying or misleading federal investigators under 18 U.S.C. 1001. He did so even though investigators working under former FBI Director James Comey reportedly had concluded that Flynn did not intend to lie and should not be charged criminally for the omission.  Flynn’s lawyer made a deal to plea to a lie, even though Flynn was guilty of nothing, to relieve Flynn from the continual stress and financial pressure he was experiencing.

“I want to make sure I am very precise, because I know there are a lot of people in the back row that will pay attention to what I say, and I want to make sure they get the words that I say right. I really believe in the things I am going to say, and like I said I spoke to General Singlaub this week about serving America, and what it means to both of us. And I want to share some of our thoughts with all of you tonight.

“Service to America requires us today and tomorrow to stand together as champions for freedom, and soldiers of liberty, who are on the right side of history. Anything less cannot be tolerated if our country is to survive. For many of us, across our nation, we understand that this is not the first time that patriots have risen to this fight that we’re in today. More than 200 years ago, more than 250 years ago, Patrick Henry, a great patriot, who understood service to America, he warned his fellow countrymen that his choice against Great Britain’s suppression of freedoms was crystal clear as mine is tonight. As he described whether to accept slavery to a monarch or freedom, seems like an easy choice.

“Almighty God, he said, I know not what course others may take, but as for me, give me liberty or give me death. What an amazing thing to say at a time for the birth of our country.

“Another great servant, Abraham Lincoln, fought for his vision to unite the North and the South as a new birth of freedom, so that all people would be treated equally, without regard for color or race. In his very famous Gettysburg Address in 1863, at the dedication of the Soldiers National Cemetery to honor Union soldiers who had died in the Civil War, Abraham Lincoln inspired our nation to fight on so that these dead shall not have died in vain and that this nation, under God, shall have a new birth of freedom, and that government of the people, by the people, by you, shall not perish from the Earth.

“Nearly, just slightly over 100 years later, in his 1964 speech at the Republican National convention, another great American servant and subsequently president of the United States, Ronald Reagan, redefined the very essence of why the fight by Americans against tyranny and injustice will never end. Must never end. Reagan said, ‘freedom is never more than one generation away from extinction.’ We didn’t pass it to our children in the bloodstream, it must be fought for, protected, and handed on for them to do the same.’

“This time, our time, our America, the urgency to act is that at the doorstep of our democracy. The future of this country depends on each one of you in this room tonight, and many, many others that you represent around our great country. This turning point is about the heart and soul of the United States of America. You cannot and must not be silent or take for granted that our great nation will not fall to the many threats that we face around the world, and some right here at home.

“It is time, it is absolutely time, this weekend, tonight, never a better time, but it is time to buckle down, and listen up, and stand ready to fight for our way of life and our traditions. Those who oppose our fundamental principles could take us down in the snap of a finger. In my book, the Field of Fight, I stated, on page 111, ‘We should not fear the Judea-Christian principles that our nation was founded upon. We should not be in fear of that. We should cherish that, we should believe in that, we should be incredibly proud of that. I will always believe that. To those in the room this evening, who have served in our military, or served as first responders, you represent our warriors around the world, and across our country. And you all know what your respective battlefields look like. They are not pretty, and they are not perfect. Definitely. We fight or serve America not because –this is super important– we fight and serve America not because we hate our enemies, it is because we love our country. We absolutely love the freedoms that we cherish. When we talk about why we fight… It is always about the buddy next to him, the person on your right or left. Deep down inside it is about the way we want to live, and the way we must continue to fight to continue to live for. Super important.

“Our fight for individual freedom and liberty, as I described a little while ago, will also not be pretty or perfect. We will be measured harshly, trust me, and our enemies will try to destroy us. But we cannot fail. There are moments in history that are seminal and then there are other moments that are monumental.

“Maj. Gen. Jack Singlaub was present at all of these during most of the last century, I mean like I said, the guy is 97 years old. I would not want to meet him in a bar fight tonight, he is a pretty incredible human being, and thank God our country has people like him.”

What has happened to Lt. General Michael Flynn since he left the Trump administration is an American tragedy.  A pardon should be forthcoming from President Trump.

Phyllis Schlafly Eagles · October 5 | Follow the Science on Monkeypox As Americans try to put Covid behind us, another frightening virus has … END_OF_DOCUMENT_TOKEN_TO_BE_REPLACED