Hazardous Duty is the epic autobiography of one of America’s greatest soldiers. Here, Major General John K. Singlaub recounts his exploits in over four decades of unconventional warfare, espionage, covert missions, and frontline action in recent history’s pivotal military theaters: World War II, the Chinese Revolution, the Vietnam War, and most recently the war in Nicaragua. A highly decorated OSS officer who became a founding member of the CIA, Singlaub here draws on recently declassified records and original interviews with military and government leaders, as well as his own experiences, to vividly describe details of key covert missions which have never before been made public. A richly detailed chronicle of an extraordinary adventurous life and an invaluable record of America at war, Hazardous Duty is also a monument to a true-life hero’s courage and integrity. 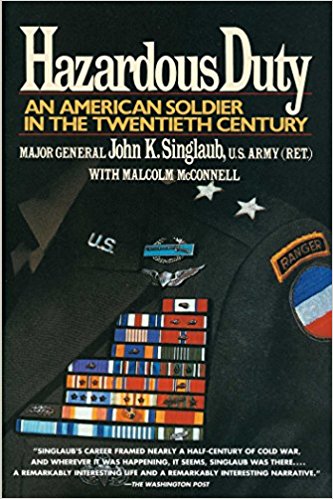 What You Need to Know is Democrats’ plan to slow down GOP investigations. David Brock (of Media Matters) released a memo detailing a group that will … END_OF_DOCUMENT_TOKEN_TO_BE_REPLACED

Phyllis Schlafly Eagles · December 2 | The Past, Present, and Future of the War on Christmas Haul out the holly and bring out the boxing gloves. … END_OF_DOCUMENT_TOKEN_TO_BE_REPLACED

Phyllis Schlafly Eagles · December 1 | We Need More Badges Herschel Walker had an iconic moment in a debate with Sen. Raphael Warnock when he … END_OF_DOCUMENT_TOKEN_TO_BE_REPLACED