Yesterday was Ronald Reagan’s birthday and it is important that we preserve his legacy. We surely can’t expect the academic community or the professional historians to do that for us. University history departments are dominated by left wingers and even Marxists who hate everything Ronald Reagan stood for.  Nor can we depend on the mainstream media to be kind to Reagan. Big Media have always been biased against him. It’s just second nature for Big Media to criticize conservatives while describing 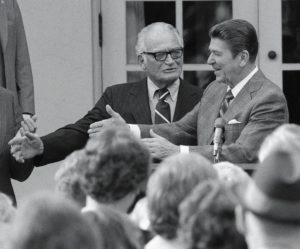 Young people need to be reminded that President Reagan restored America’s national confidence, propelled our economy into the longest expansion in history, and, in the famous words of Margaret Thatcher, “won the Cold War without firing a shot.”

Ronald Reagan was a man of principle. As president of the Screen Actors Guild in Hollywood, as an advocate  for Barry Goldwater’s presidential bid in 1964, as a candidate for president in 1976 and 1980, and as president from 1981 to 1989, Reagan was always steadfast in what he believed.  You should  reread  the great speech he gave in 1964 that propelled him to national prominence. The conservative message that he believed in is right there: tax cuts, smaller government, standing up for American interests, and doing the right thing.

Ronald Reagan was a man of great faith in America and optimism about the future. That’s why he talked so often about America being a shining city on a hill.

It was my pleasure to have worked hard for Ronald Reagan when he ran for President, and it was my honor to have visited the White House many times while he lived there. Reagan was warm-hearted,  fun to  be with, confident  that  he was fulfilling the mission God laid out for his life, and humble as he exercised the vast powers of the American presidency. Ronald Reagan was our greatest 20th-century President.

Phyllis Schlafly Eagles · #WYNK: Fake History is a Real Problem | August 31, 2022 #ProAmericaReport The following is a transcript from the Pro … END_OF_DOCUMENT_TOKEN_TO_BE_REPLACED

What You Need to Know is we are in a proxy war with Russia. Until now, we’ve been able to at least try to say we have given Ukraine defense weapons … END_OF_DOCUMENT_TOKEN_TO_BE_REPLACED

What You Need to Know is a lesson on documents and double standards. Suddenly everyone has classified documents and everyone is spinning the stories … END_OF_DOCUMENT_TOKEN_TO_BE_REPLACED

What You Need to Know is to thank the Freedom 20 who took up the House Speaker fight last week. Get the list here — it only takes 3-5 minutes … END_OF_DOCUMENT_TOKEN_TO_BE_REPLACED

What You Need to Know is Mom first! Life begins at conception. But what if the pro-life movement reframed the battle. What if we advertised that life … END_OF_DOCUMENT_TOKEN_TO_BE_REPLACED