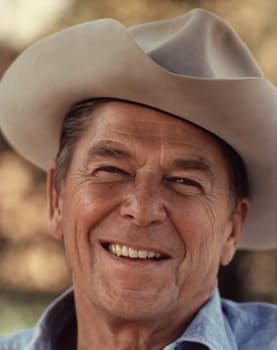 During the years from 1976 to 1980 when Ronald Reagan was traveling the country, speaking informally and listening to hundreds of small groups, he sharpened his own conservative philosophy and his vision of where America should be headed. In a speech in 1975, he spelled out his formula. That speech is so relevant now that the rest of this broadcast is a quote from Reagan’s speech:

“We have been through a disastrous election. It is easy for us to be  discouraged, as pundits hail that election as a repudiation of our philosophy and even as a mandate of some kind or other. But the significance of the election was not registered by those who voted….

I am impatient  with those Republicans … saying, “We must broaden the base of our Party” — when what they meant was to fuzz up and blur even more the differences between ourselves and our opponents. It was a feeling that there was not a sufficient difference now between the parties that kept a majority of the voters  away from the polls [in the last election]. …

Our people look for a cause to believe in…. We need a new and revitalized second party, raising a banner of no pale pastels, but bold colors which make it unmistakably clear where we stand on all of the issues troubling the people. Let us show that we stand for fiscal integrity and sound money and above all for an end to deficit spending, with ultimate retirement of the national debt. Let us also include a permanent limit on the percentage of people’s earnings government can take without their consent. … Let us explore ways to ward off socialism….

A political party cannot be all things to all people. It must represent certain fundamental beliefs which must not be compromised to political expediency, or simply to swell its numbers. It is time to reassert that principle and raise it to full view. And if there are those who cannot subscribe to these principles, then let them go their way.” That 1975 advice from Ronald Reagan is still good advice today.

Phyllis Schlafly Eagles · #WYNK: Fake History is a Real Problem | August 31, 2022 #ProAmericaReport The following is a transcript from the Pro … END_OF_DOCUMENT_TOKEN_TO_BE_REPLACED

What You Need to Know about Priorities & America First. Phyllis Schlafly would give awards to significant people in her life. On these awards … END_OF_DOCUMENT_TOKEN_TO_BE_REPLACED