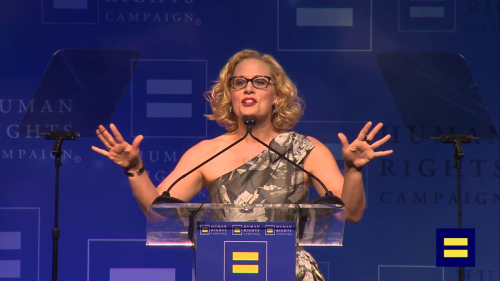 People around the World enjoy their established customs and traditions; Americans are certainly no exception. We enjoy decorating a Christmas tree, hiding Easter eggs, and/or shooting off fireworks on the 4th of July.  We have welcomed people from other parts of the world who want to make this nation their home. Unlike many countries, America welcomes foreigners and we provide avenues for them to become citizens.

However, for the protection of our millions of citizens there are specific requirements that must be followed, laws obeyed, and although not legally required, it is hoped those who desire to be American citizens will also want to accept and enjoy some of our most cherished customs.  Without question, shouldn’t those requirements apply to everyone who seeks to become a United States officer and/or public servant?

Senator Kyrsten Sinema, the newly elected Democrat from Arizona, recently proved she is unwilling to abide by our traditions. Sinema broke a century old American tradition when she refused to state her “oath for office” on a Bible or any other religious book.  Instead, Sinema used a law book to execute her ceremonial oath of office.  This newly-elected official shunned one of America’s longest and most treasured traditions, and whether she meant to or not, this woman insulted all Americans by refusing to do what so many other patriots had done before her.  Should Arizona residents now be wondering what other American customs and traditions this bold woman will ignore in her position as their representative?  Will her constituents remain silent and allow their state to be changed in ways that do not represent the values of most Arizonans?

Were Arizona voters even aware Sinema intended to make changes in their state … that she disagreed with many traditions the majority have enjoyed in the State?   She is the only member of the Senate who does not claim to be a member of any religion. She admits to being bisexual, and Sinema is proud of her reputation as a radical Code Pink activist.  If the before mentioned unusual traits do not bother some of her constituents, we can only hope that her latest and most shocking admission might be of concern when admitting to being a Taliban sympathizer.

Rejection of a Combat Veteran by Arizonans

Sinema’s opponent in the 2018 Arizona mid-term election was Martha McSally, a loyal American patriot, who had proudly served in our military as a decorated combat soldier.  McSally was the first American female to engage in a combat position, indicating she was highly respected by military authorities.  McSally chose to take her oath of office using a Bible recovered from the USS Arizona, the ship that sank during the attack on Pearl Harbor in 1941. McSally was also known as a “workhorse” when a member of Congress and was well respected by her colleagues.

Speculation continues as to what Arizona voters were thinking.  Did media sources underplay McSally’s attributes and/or choose to hype those of her opponent?  Did McSally fail to sufficiently promote her accomplishments?  Perhaps McSally might have done a better job of promoting herself, but certainly Arizona residents had to be aware of her stellar qualifications.  Trying to understand what happened, some considered the possibility of voter fraud.  Arizona Republicans complained about some voting irregularities, including the unusually long period of time it took to count all the votes after the polls closed.

Because Arizonans rejected a decorated war veteran for a Taliban sympathizer, political observers are eager to know how that happened in a state that had just honored their deceased war hero, Senator McCain.

Ocasio-Cortez has little political experience to recommend her, unless criticizing her political opponents qualifies as such.  Inflammatory rhetoric and verbal assassinations of her critics has drawn media coverage.  This is in keeping with today’s challenge by many Democrat sources that seem to hinge on who can do the most damage to our duly elected president’s reputation and point out ways their opponents are associated with him.  One can only wonder what our forefathers would have stated about this new style of political rhetoric and drama that persuaded good citizens to vote for women like Kyrsten Sinema and Alexandria Ocasio-Cortez.

Criticism against our president may not be new, but it certainly is a very sharp contrast from the love affair the media had with Obama and his administration.  Many American patriots find this continuing harsh negative rhetoric not only harmful to Trump but to America as well, especially because the negativity appears to be founded as much on political party preference than anything else.  It seems apparent the media was far more willing to promote Ocasio-Cortez’s attributes and downplay or ignore her obvious political ignorance, which was easily proven when she time and again displayed her lack of knowledge of issues, which as a candidate, she should have known thoroughly.  It appears much of Alexandria’s victory was based largely on her messages filled with divisive rhetoric against President Trump, which her constituents obviously agreed with.

What are the Responsibilities of Citizens?

The American public can forget any hope for unity in Congress when Democrats like Kyrsten Sinema and Alexandria Ocasio-Cortez are elected.  Their goal is not one of uniting; instead, their rhetoric and platform are designed to divide us for personal purposes.  Former respected leaders have always urged this nation to remain united and warned that divisiveness is dangerous.  Upon leaving office as our first president, George Washington cautioned against three interrelated dangers that threatened to destroy the Union: regionalism, partisanship, and foreign entanglements. In his farewell address Washington warned his countrymen not to let regional loyalties overwhelm national attachments:

“The name of American…must always exalt the just pride of patriotism more than any appellation derived from local discriminations.”

It is the duty of American voters to discern which candidates best exemplify the description of a patriot as described by George Washington and support those candidates.  The priority of any candidate must first be a proven love for all our people and devoid of rhetoric intended to divide.  Wisely choose those who are willing to work for the stability of America, rather than those who are “self-serving,” single-focused,” or disrespect our Constitution and/or established laws that have benefited our people for centuries.   Prefer those candidates whose character and loyalty to our nation cannot be questioned, because past actions do reflect the direction they will take in the future.  Be wary of any who make promises they cannot possibly keep or who advocate for major changes based on an agenda that defies the character of our forefathers and the wise laws which allowed America to become one of the greatest nations in the world.

Although the duties outlined above seem an impossible task for our electorate to follow in our polarized nation, each of us must do our best to help resolve these important issues.  Conversations are necessary; heated rhetoric and partisan divide is unproductive.

What choice do we have but to continually remind all within our sphere of influence that when America operates in the way this nation was founded … as a Representative Republic …. and when the majority vote for patriots who consider the above their goal …. America will continue to prosper.

What You Need to Know about Priorities & America First. Phyllis Schlafly would give awards to significant people in her life. On these awards … END_OF_DOCUMENT_TOKEN_TO_BE_REPLACED