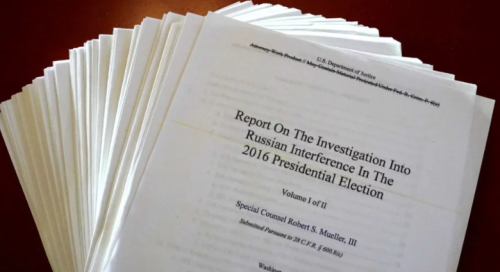 Robert Mueller might have closed the books on his 2-year reign of terror against Trump supporters, but that doesn’t mean Democrats aren’t determined to continue fishing for something to destroy Trump and his presidency through impeachment or otherwise. But what about the collateral damage Mueller caused by inflicting harm to many people, most of whom were innocent, as well as the American people, with his conspiracy theory about collusion with Russia which burned through at least $25 million at taxpayer expense.

As reported by Attorney General William Barr in his four-page letter to Congress, the Special Counsel and his team “issued more than 2,800 subpoenas, executed nearly 500 search warrants, and obtained more than 230 orders for communication records.”  They executed “almost 500 orders authorizing use of pen registers, made 13 requests to foreign governments for evidence, and interviewed approximately 500 witnesses.”

As to the 500 witnesses, witnesses to what, as there was never any collusion between the Trump campaign and Russia, which Mueller finally admitted in his report.  As for Lt. Gen Michael Flynn, he still faces sentencing from the deal he agreed to in order to save his family.  For spending a mere 24 days as President Trump’s National Security Advisor, Gen. Flynn has been forced to incur $5 million in legal fees.

Now that the Mueller Report failed to live up to expectations by absolving Trump and his campaign squad of collusion, the Democrats are compelled to pretend that the President’s real crime was engaging in obstruction of justice.  But before considering Part 2, the obstruction of justice section of the Mueller Report, it’s probative to consider what the collusion report omitted.

Ben Weingarten, a senior contributor at The Federalist and senior fellow at the London Center for Policy Research, writing for The Federalist, notes seven of the most glaring omissions from the collusion section of the redacted Mueller report—since collusion, not obstruction, was the theory from which the investigation stemmed. Accordingly, these seven omissions all but kill the credibility of the Mueller Report:

As Weingarten wrote:  “By presenting the collusion section as it did, similarly to the obstruction section, the counsel damaged the Trump administration to the greatest extent possible without affirming its criminality. It seems that Mueller pulled a Comey.”

On top of which, you’d have to explain how in the absence of an actual crime having taken place, it was even possible to obstruct justice, when the crimes were committed by members of the Deep State serving in the Obama administration at the Justice Department and within the upper echelons of the FBI, all of whom conspired to traitorously nullify a presidential election.

Even a case for colluding with the Russians could be made, but it would target President Obama and Secretary of State Clinton.  In his case, it involved promising Putin to be more flexible after the 2012 election and ignoring Russia’s attempt to influence the 2014 and 2016 elections.  In Mrs. Clinton’s case, it involved pushing the re-set button with her Russian counterpart, transferring 20% of our uranium deposits to Russian gangsters and conspiring with Christopher Steele to use the phony Russian dossier against Trump.

Given that the discussion about Russian Collusion switched off overnight as though it never happened, the controversy continues about obstruction, and to a lesser extent, the supposed absolution of Trump by William Barr. In both cases, the comments by the news media does not reflect what Mueller obstruction documents really say. One person gets it wrong and the next person repeats that misstatement, adding their own embellishments. Even Fox News is guilty of misrepresenting the sources and allowing their guests to do the same.

The ambiguity of the Mueller Report regarding obstruction comes from the broad standard used by Mueller, to the effect that any criticism of the investigation could be construed as an attempt to interfere, although the legal standard is that there must be “corrupt intent” to avert prosecution for a crime, for oneself or on another’s behalf.

Mueller granted that the “obstruction” on Trump’s part was due to his frustration over accusation he knew to be false, as vindicated in Mueller’s report. Why then didn’t Mueller recommend indictment? Probably because he knew it would be quashed based on the law. Instead, Mueller left the question open, probably to pass the torch to House investigations, where law and the Constitution mean little.  A more lenient interpretation is that Mueller intended Congress to define “obstruction” better in new legislation, not that this would impede Congress in the slightest!

Perhaps the most grievous mistake by the left that Mueller failed to vindicate the President. In fact, prosecutors indict or do not indict, and courts find defendants guilty or not guilty. “Innocent” is not a determination decided by law. You can’t prove a negative, and not all facts lead to even a preponderance of guilt, much less beyond a reasonable doubt. What is being ignored is a defendant is innocent until proven guilty.

It seems apparent that the special counsel engaged in anything resembling an intellectually honest, objective, and good faith investigation. Rather, it would seem to indicate that wittingly or unwittingly, this was more of a politicized smear job and de facto coverup.

We must have a thorough investigation of the investigators. The growing cacophony of attacks on Attorney General William Barr are a testament to it.

Watch here the video of Joseph A. Morris on April  19, 2019, in a 12-minute discussion of the Mueller Report on “Chicago Tonight”, the showcase nightly news and discussion program on WTTW  (PBS-Chicago).  Joseph A. Morris is a Partner in the law firm of Morris & De La Rosa, with offices in Chicago and London. He maintains an active practice conducting trials and appeals in the areas of constitutional, business, labor and international law.

The dramatic exit last Friday by Rep. John Katko (R-NY), who announced he would not run for reelection, may have shocked liberals but was no surprise … END_OF_DOCUMENT_TOKEN_TO_BE_REPLACED

What You Need To Know about Mitch McConnell. Andrea Kaye, guest host of the #ProAmericaReport, explains how President Biden is trying to get rid of … END_OF_DOCUMENT_TOKEN_TO_BE_REPLACED

What You Need to Know is being pro-life means we have to drain the swamp. When you take a look at the abortion industry, all you have to do is follow … END_OF_DOCUMENT_TOKEN_TO_BE_REPLACED

What You Need to Know is Joe Biden is bottoming out. It’s just epic and astonishing how badly the administration is failing to adjust to the fallout. … END_OF_DOCUMENT_TOKEN_TO_BE_REPLACED

What You Need To Know is this crime wave is intentional. Guest Host Andrea Kaye describes disturbing reports about a massive crime rate and murder … END_OF_DOCUMENT_TOKEN_TO_BE_REPLACED

As we close the books on 2021, the award for worst prediction of the year was that Donald Trump would somehow fade from political influence. … END_OF_DOCUMENT_TOKEN_TO_BE_REPLACED

If the education establishment wants to know why public schools don't get much respect from our citizenry, they need look no further … END_OF_DOCUMENT_TOKEN_TO_BE_REPLACED

Robert Strange McNamara belongs on the daytime soap operas. Better yet, his histrionics belong on Donahue or Geraldo or Sally Jesse Raphael. We are … END_OF_DOCUMENT_TOKEN_TO_BE_REPLACED