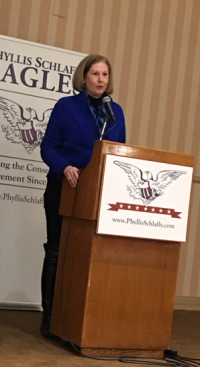 “We are in a war for the heart and soul of America.  Under siege from every single front with sixteen on-going investigations, President Trump is fighting for his life in an all-out assault on everything he is trying to do.”

Chilling words from the perspective of Sidney Powell, an experienced federal appeals attorney who has served in three different U.S. attorneys’ offices and as Appellate Section Chief in two Texas districts.

She was featured at the annual Gathering of Eagles in St. Louis last month with Phyllis Schlafly Eagles leaders from throughout the nation.

This woman knows the law. She definitely needs to be on the legal defense team of our President. She is often featured on Fox News and was recently on Mark Levin’s Sunday night program for an hour. This is a must-watch show to understand the Mueller investigation. Watch it here. She knows the law and what needs to be done to help our President and to get the truth out to the public.  Check out  https://sidneypowell.com/ and Sidney’s  website with its “Creeps on a Mission” T-shirt offer, to learn more about her outstanding work.

There is a great disconnect between the Robert Mueller described by the mainstream media as a model of public propriety, and the Robert Mueller documented by independent researchers which show a career characterized by cover-ups, corruption and unconscionable conduct as an ever-willing instrument of Deep State dissimulation.

As in the Mueller investigation, when it comes to protecting covert operations or advancing secret agendas, human beings are collateral damage to Mueller. Such was the sordid story related by Sidney Powell.  (If you are interested in reading more about Mueller’s abuse of power in advancing the agenda of the power elite, as a Deep State operative, and a clandestine scheme check out this book, Robert Mueller (Errand Boy For The New World Order) by Louisiana state Senator John Milkovich.)

“The Mueller Special Counsel was a carefully calculated scheme to destroy the President.  It was a criminal conspiracy to indict people if they were on the wrong side of history.  Mueller was the insurance policy to investigate him and to protect others,” she told the group.  “Accordingly, Mueller has the White House and the Department of Justice hamstrung as he continues to search for an elusive crime to pin on the President going only after Republicans, while ignoring provable crimes by the Clinton Campaign, the FBI, the FISA Court, and more.”

Powell spoke initially about Mueller’s direct conflict of interest as a friend of disgraced FBI Director James Comey, who Trump fired, that should have prohibited Mueller from serving as the Special Counsel to investigate President Trump. In Powell’s opinion, it was Comey’s conversations with Trump himself that made Comey a crucial witness in the investigation. As such, she said, Mueller had no choice but to disqualify himself. The special counsel law calls for mandatory recusal and afforded Mueller no discretion.

Another conflict of interest, Powell said, was Mueller’s role in the investigation of Russia’s effort to illegally gain control of a substantial part of United States’ precious supply of uranium. That investigation was taking place within the Mueller FBI while then-U.S. Attorney Rod Rosenstein was also involved in the Russian uranium investigation in conjunction with Mueller.

Mueller’s bias was evident when he hired seventeen Democrat-supporting lawyers who had made significant contributions to Democrats or their campaigns and no Republican lawyers, Powell said.

Worth noting is that one of the lawyers hired by Mueller was a notoriously “tough” prosecutor Andrew Weissman, Mueller’s legal “pit bull,” who has previously been accused of “prosecutorial overreach.”

Powell said Weissman had had a less than stellar career after various courts reversed his prosecutions due to questionable conduct and tactics.

Her book describes Weissman’s actions when as director of the Enron Task Force, as well as Weissman’s prosecution of four Merrill Lynch executives which he threw into prison without bail for a year, only to be reversed by the 5th Circuit Court of Appeals.

It was through a Foreign Intelligence Surveillance Court (FISA) that Flynn was unmasked for his lawful conversation with the Russian ambassador during the Trump Administration’s transition. Flynn had campaigned and publicly supported then-candidate Trump throughout 20l6. We know now from James Comey that the FBI deliberately set up General Flynn and sent agents to catch him off guard that day—leading him to believe it was some kind of training exercise.

Mueller is now issuing subpoenas for the Trump Inaugural Committee.

Sidney speaks about the early morning raid of Roger Stone

How fortunate it was that Sidney Powell, after speaking Thursday night at The Gathering, remained at the event to wake up to the news of the FBI’s dawn raid on Trump associate Roger Stone Friday!

As Powell described, the FBI used excessive force to wake up Stone and his wife. She suggested it was done that way because Mueller could signal to others that it could also happen to them if they were on the wrong side. What the world witnessed was a complete upending and weaponizing of the Department of Justice.  She expressed hope that the new U.S. attorney general would take steps for criminal justice reform.

Powell said prosecutors that hide evidence (called Brady) should be named and shamed. (The Brady doctrine is a pretrial discovery rule that was established by the United States Supreme Court in Brady v. Maryland (1963). The rule requires that the prosecution must turn over all exculpatory evidence to the defendant in a criminal case. Exculpatory evidence is evidence that might exonerate the defendant.

Powell also suggested limiting indictments to five or six, because this is enough to charge a defendant. Once a person is indicted, people seem to forget they are still entitled to the presumption of innocence.  An indictment is not evidence at all.

Here is an excellent blog to find out anything you ever wanted to know about the Mueller investigation, many times referred to as the “Mueller Witch Hunt.”

In addition to Powell’s presentation, the conservative group heard about how the ERA is making its way through the nation, and how the Constitutional Convention proposal is emerging once again.

Fight against ERA in Virginia from Delegate Bob Marshall

The Equal Rights Amendment (ERA) has reared its ugly head in Virginia this year, even though its deadline expired more than 36 years ago!  Yes, in Virginia, the same state where its pro-abortion, Democrat Governor Ralph Northam featured a shockingly offensive blackface and KKK-hooded individual on his medical school yearbook page.  That was not mere high school antics which liberals insisted should disqualify Brett Kavanaugh, but post-college adult conduct by the future governor.  Anyway, back to ERA, where four bills HJ577, HJ579, HJ583 or SJ284 were sent to the House of Delegates Privileges & Elections Committee in late January, after ERA passed the Virginia Senate.

ERA is “fake legislation” because no appellate court would take seriously a law enacted after expiration of its deadline.  Moreover, ERA would not be good for anyone. It would federalize state family law. It would allow boys to play in girls’ sports, as in Massachusetts with terrible results. It would result in mandatory taxpayer-funded abortions.  ERA was a bad idea in the 1970s, and worse today.

Andy Schlafly submitted testimony to the Virginia House of Delegates Privileges & Elections Committee. and thankfully it then defeated the first ERA bill that came up.  But liberal feminists are trying to go around the Committee and push ERA directly on the Virginia House floor!

This year the “horrible idea” is back, with another couple of million dollars in dark money by globalists to fund it.  Their salesmen talk and talk until asked where their money is coming from, and then they clam up.  They have co-opted ALEC, some talk radio types, and a few others who got money to promote this.  This year they target Arkansas and Wyoming, and they arranged for suspending the rules in order to push this through the Arkansas Senate.  But as of February 6th, no State has passed it this year, and in a few years the resolutions wrongly passed by some of the 12 will begin expiring.  They need 34 states to pass this in order to convene an actual convention.

To follow will be an account by Nancy Thorner of an Eagle Gathering presentation about “National Sovereignty in America and the World” featuring Hungarian Ambassador Dr Laszlo Szabo.

Phyllis Schlafly Eagles · April 22 | Conservatives Fall For A Con Game Some conservatives are falling for a con game and they don’t even know it. … END_OF_DOCUMENT_TOKEN_TO_BE_REPLACED

What You Need to Know is the House GOP Must Exercise Power of the Purse. We’re back to following the money this week, this time in Congress! House … END_OF_DOCUMENT_TOKEN_TO_BE_REPLACED

Proving once again that he is in touch with ordinary Americans, Donald Trump selected education for the first video message of his 2024 presidential … END_OF_DOCUMENT_TOKEN_TO_BE_REPLACED

Phyllis Schlafly Eagles · #WYNK: Trump's Record is Baked In | January 30, 2023 #ProAmericaReport The following is a transcript from the Pro … END_OF_DOCUMENT_TOKEN_TO_BE_REPLACED

Phyllis Schlafly Eagles · February 8 | Leftist Hollywood's Downward Spiral Looking back on 2022, it is plain to see that Democrat-dominated … END_OF_DOCUMENT_TOKEN_TO_BE_REPLACED