Author’s Note: Scroll to the very bottom of the page to view the special color-printed 18th Anniversary Edition of the Phyllis Schlafly Report.

When it comes to a function of the Constitution which has not been attempted, imagery is an effective way to get the message across. Phyllis aptly chose the seriousness of a loaded gun and the uncertainty of empty chambers to illustrate the situation. The December 1984 Phyllis Schlafly Report entitled “CON CON: Playing Russian Roulette with the Constitution” is an iconic treatise on the plan liberals want you to think will help conservatives. We have no guarantees for good or ill where a Con Con will lead, but as Phyllis wrote, “It isn’t rational to take such a risk with something so important as our Constitution.” If we are to win the fight on Article V, we must cut through the lies, misinformation, and false promises from our bought-out “friends” on the right. Of course, there is no better source for cutting through lies, misinformation, and false promises than the Phyllis Schlafly Report.

At the time of this writing, twelve states have passed Con Con resolutions with the language of the Convention of States project, one of the leading proponents of a Con Con. While this is certainly a cause for concern, they are still twenty-two states away from forcing Congress to call the convention. At the time that Phyllis published the December 1984 Phyllis Schlafly Report, thirty-two states had passed Con Con resolutions, making it a true “constitutional crisis.” Phyllis did not pull any punches when it came to exposing the fraud facing the American people.

She began by analyzing the mindset of those who favor a Con Con. She concluded that they were generally uninformed and focused more on the promises made about what a Con Con could achieve than on the very real dangers that such a conference could present. This is not to say that she was calling them incompetent. Rather, she felt they were being misled by smooth-talking well-financed spokesmen. Phyllis Schlafly’s cure for the misled was to deconstruct mythic “safeguards” purported by the spokesmen. Curiously enough, Con Con supporters were singing a much different tune than they are today. In 1984, they reassured Americans that a Con Con would not be a runaway convention because Congress would establish the procedures under which such a convention would run. That is a considerably different story than their current line that a Con Con would be completely out of the hands of Congress. This change of opinion should come as no surprise since Gallup reports that public approval of Congress under Reagan skyrocketed to double what it is today. Clearly, Con Con spokesmen only want to pander to public opinion in order to achieve their agenda. Despite this total shift in dialogue, Phyllis’s arguments did not change. She always held that no one, not even the greatest legal and constitutional scholars of our time, could provide adequate reassurances that a Con Con would not end in disaster.

Phyllis Schlafly held that events like the International Women’s Year Conference of 1977 “provide frightening lessons in how the election of delegates to a one-time-only national conference can be manipulated by special-interest pressure groups.” She continued to say, “No one could reasonably assert that their final resolutions represented majority thinking in the United States.” Clearly, a Con Con would be anything but a “Convention of States” and it could not be trusted to effectively reflect the will of the people. Instead, it would be a massive struggle between power structures teeming with big donor money and influence from every interest group seeking to get their own chunk of the Constitution.

The most striking parallel between the Con Con fight today and the Con Con fight in 1984 is that they come at what is arguably the most inconvenient time imaginable. Why would it make sense to play Russian roulette with the Constitution under President Reagan, when conservatives could do so much good in so many less risky ways? Likewise, why would we pull the emergency brake on President Trump when conservatives finally have the chance to get some real work done? Con Con is ultimately predicated on the fact that what conservatives are doing is not working, that we have to take extreme measures because what we are doing will never succeed. However, the election of President Trump is living proof that conservatives can succeed. We can make a difference. Never let a Con Con supporter tell you that your efforts are meaningless. Now is the time to coalesce behind our conservative president and help him make a difference, just as it was in 1984. Do not throw away Trump’s victory for a game of Russian roulette.

To view the December 1984 Phyllis Schlafly Report in its entirety, please click on the image below. 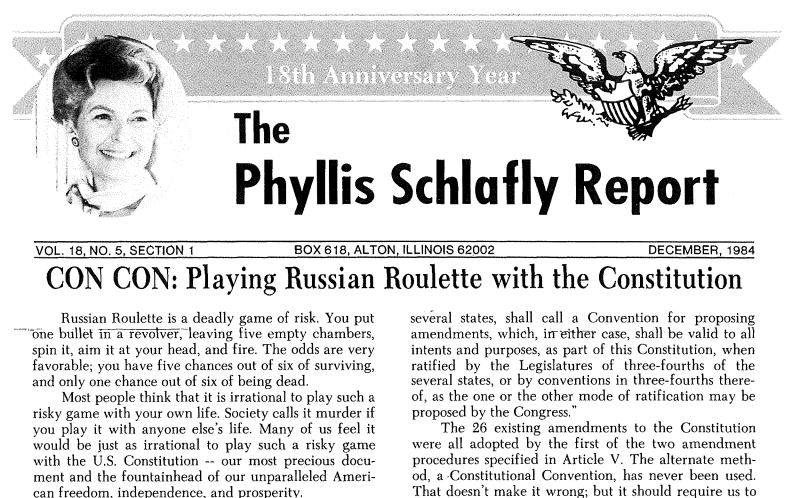 As a special bonus, you can also click on the image below to see the 18th anniversary issue of the Phyllis Schlafly Report. In addition to a special message from Phyllis, this issue also features a wonderful gallery of color pictures. 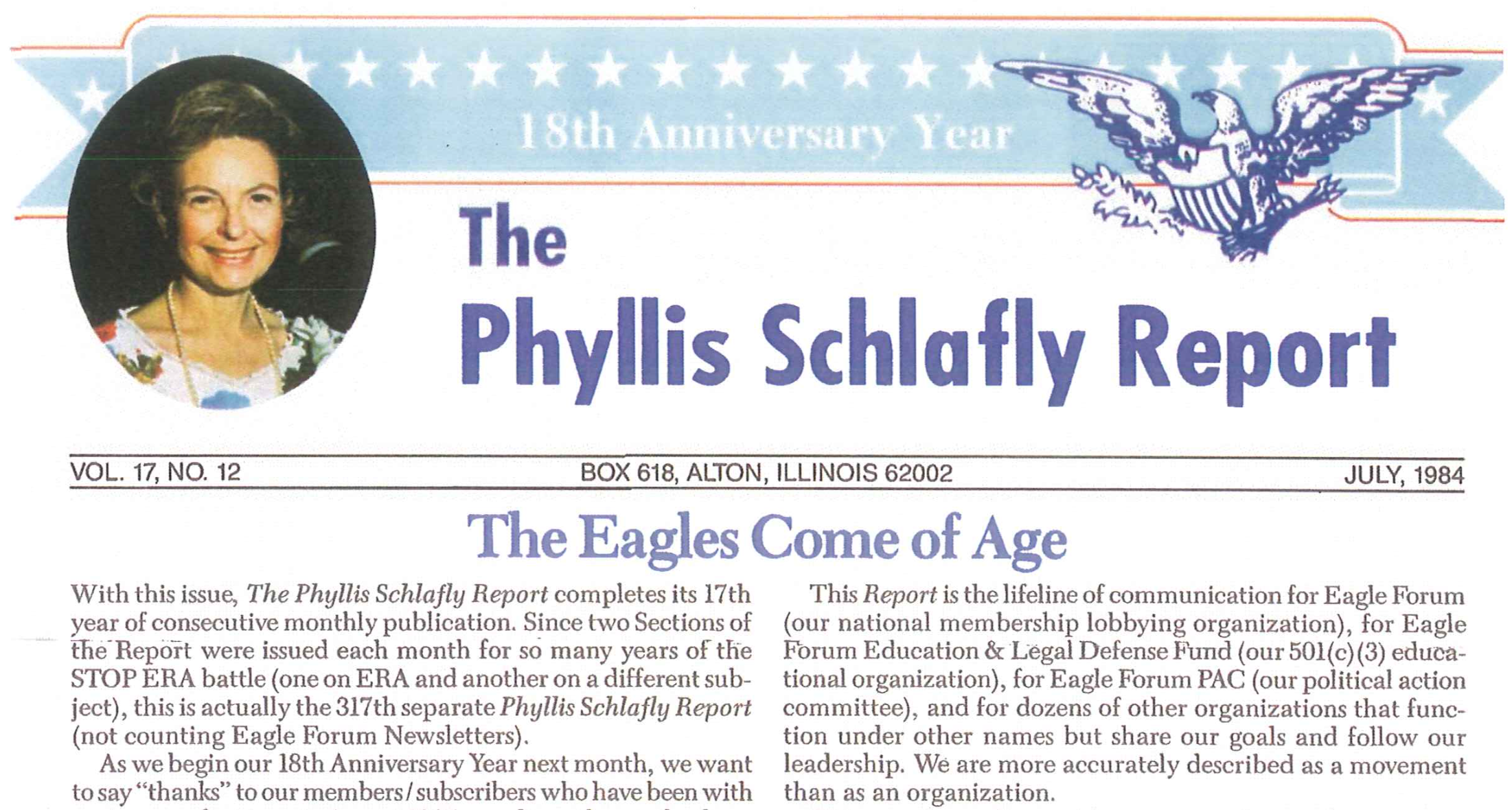 What You Need to Know is Nancy Pelosi and her colleagues are locking the American people into a solitary bubble. People are brainwashed and trapped in … END_OF_DOCUMENT_TOKEN_TO_BE_REPLACED

Phyllis Schlafly Eagles · April 22 | Conservatives Fall For A Con Game Some conservatives are falling for a con game and they don’t even know it. … END_OF_DOCUMENT_TOKEN_TO_BE_REPLACED

What You Need to Know is Montpelier is going Woke. Soledad O’Brien is now on the board of directors of Montpelier, James Madison’s home. She is part … END_OF_DOCUMENT_TOKEN_TO_BE_REPLACED

Phyllis Schlafly Eagles · #WYNK: Montpelier is going Woke | May 19, 2022 #ProAmericaReport The following is a transcript from the Pro America … END_OF_DOCUMENT_TOKEN_TO_BE_REPLACED

What You Need to Know is our election system is broken! It's failing and We the People have no confidence in the system. Pennsylvania has shown again … END_OF_DOCUMENT_TOKEN_TO_BE_REPLACED

What You Need to Know is the Border is about to be totally open! In just a few days we are going to see around 18,000 illegal aliens crossing our … END_OF_DOCUMENT_TOKEN_TO_BE_REPLACED