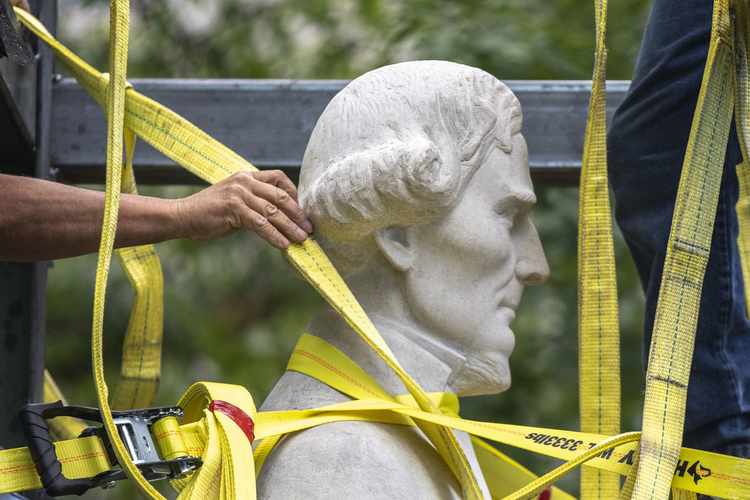 Americans first watched in horror as mobs of anarchists seized the streets of our major cities, breaking windows, setting fires, and looting stores. Then they began pulling down statues that had stood for decades, or in many cases, more than a century.

The real targets of the violent Leftists are not George Washington, Thomas Jefferson, Abraham Lincoln, and Teddy Roosevelt, whose faces are carved into Mount Rushmore. Rather, the goal is to discredit America itself by smearing those who gave us the freedom and prosperity we enjoy today.

Local police in Democrat-controlled cities have mostly stood and watched silently, neither stopping the destruction nor arresting and charging those responsible. At the White House, President Trump reacted on Twitter, promising to restore order if local officials fail.

The restraint by our president came to an end last night when a mob reached Lafayette Square in front of the White House. Cheered by onlookers who broke through a chain link fence, a small group of men tied ropes around the massive bronze figure of our 7th president, Andrew Jackson, mounted on a horse at the center of the park.

United States Park Police arrived at the scene to disperse the unruly crowd mere moments before the vandals would have toppled the 15-ton statue, though not before it was defaced with ugly words like “Killer Scum” that will be costly to remove. It is unlikely that the vandals had any appreciation for what Jackson achieved and stood for.

Andrew Jackson was perhaps the most influential American between the founding of our nation and the Civil War, who more than anyone else defined the scope of presidential power. He was also the first president to represent the common man, triumphing over the elite of his day, and voluntarily retired after two terms when he could have won reelection repeatedly.

“Last night, we stopped an attack on a great monument,” Mr. Trump told reporters the next morning. “I just want to thank law enforcement. Numerous people are in jail and are going to jail today.”

Aside from the character of the man it commemorates, the Jackson statue is remarkable in itself as an important work of art. It was the first bronze statue cast in the United States, and the first equestrian statue in which the horse is balanced on its two hind legs.

“We are looking at long-term jail sentences for these vandals and these hoodlums. They’re bad people, and they’re not taking down our monuments.”

What a difference from last Friday, when a mob succeeded in toppling and burning a statue of a Masonic leader, Albert Pike, in Washington’s Judiciary Square. The statue of Pike had been erected in 1901 with the approval of Congress after a nationwide fundraising campaign by the Masons.

Some weak Republicans have sought compromise with the radical anarchists by evicting Confederate statues from public spaces. But what about Arlington National Cemetery, where America’s honored dead are buried?

Arlington sits on the 1,100-acre estate once owned by the Virginian Robert E. Lee and his wife, who inherited the property from Washington’s adopted grandson, George Washington Custis. Some 400,000 American heroes rest in peace there under the silent watch of the now-empty Custis-Lee Mansion.

The ongoing attacks on statues has little to do with the Confederacy, as the vandals are just as resentful of most of the men in American history. The mob has attacked statues of patriots who fought for our country under the Stars and Stripes, including Presidents Ulysses S. Grant and Teddy Roosevelt.

The victims of this outbreak of anarchism were not promoters of slavery. Teddy Roosevelt, for example, was born in New York City merely two years before the Civil War started, but Democrats have agreed to remove a remarkable statue of him outside its famed American Museum of Natural History.

Thomas Jefferson, meanwhile, was the man who penned the revolutionary phrase “all men are created equal” in our Declaration of Independence. Jefferson’s words were instrumental in ending slavery.

Ironically, it was white Leftists in Portland, Oregon who used an ax to tear down a statue of Jefferson. Portland is one of the least diverse cities in the nation, and yet wants to accuse great Americans of racism.

This is not really about a sculpture or monument, of course. It is an attempt to make America the object of scorn, while denying credit to those who made America great.

What You Need to Know is the media is finally reporting on the Southern Border! Governor Ron DeSantis and Governor Greg Abbott are forcing the media … END_OF_DOCUMENT_TOKEN_TO_BE_REPLACED

Phyllis Schlafly Eagles · September 28 | The Politicization of the School Lunchroom There are all kinds of labels on food these days. You may have … END_OF_DOCUMENT_TOKEN_TO_BE_REPLACED

Phyllis Schlafly Eagles · #WYNK: Ray Epps Was In On It! | September 27, 2022 #ProAmericaReport The following is a transcript from the Pro America … END_OF_DOCUMENT_TOKEN_TO_BE_REPLACED