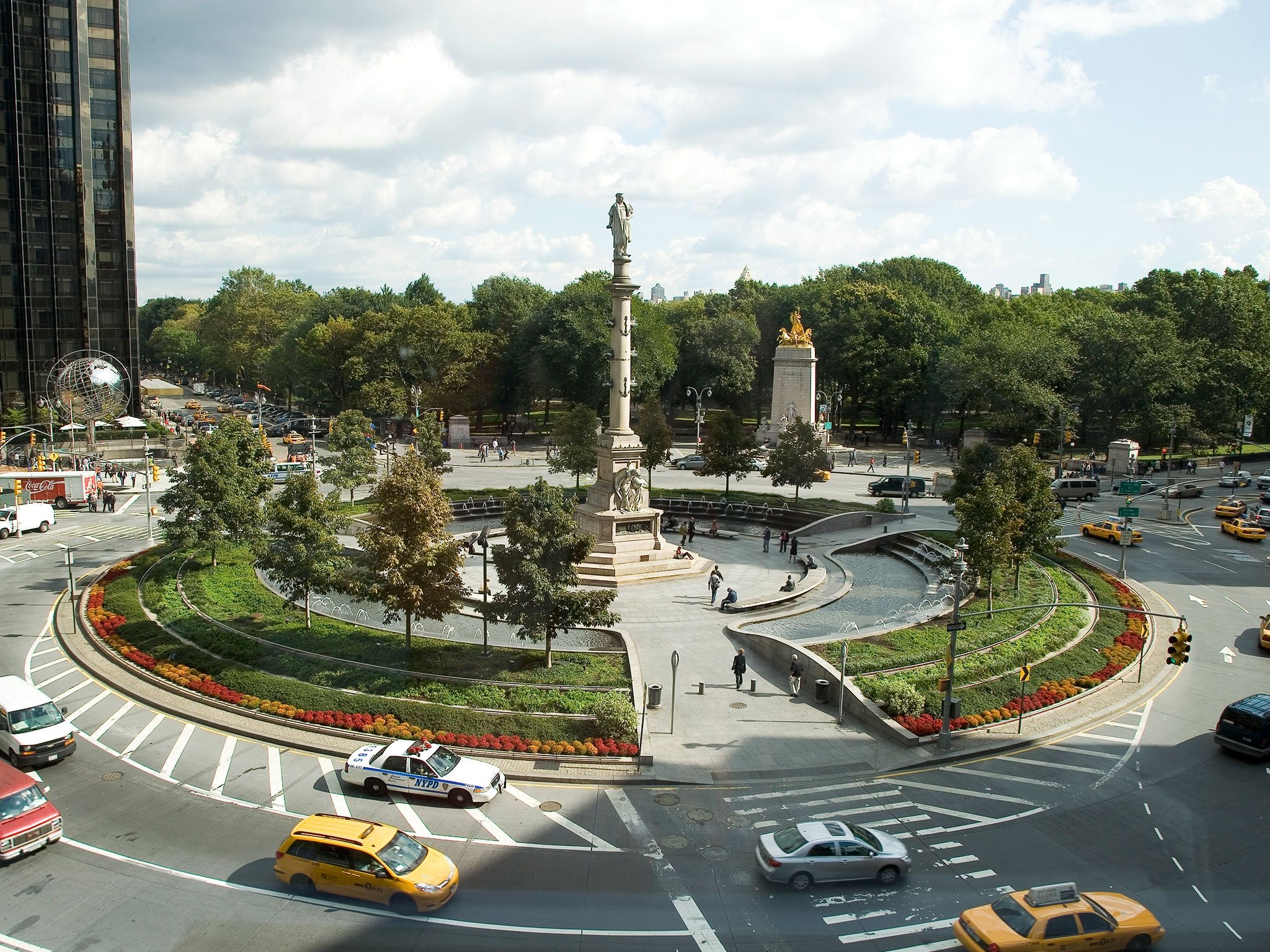 On the 525th anniversary of the European discovery of America, the 90-foot tall monument in New York’s huge Columbus Circle escaped damage — but only because the NYPD maintained a 24-hour honor guard during the entire 3-day holiday weekend. Police protection was needed because the violent leftwing movement known as “antifa” had announced a nationwide campaign to “deface Columbus Day.”

Statues left unguarded were not so fortunate. Around the nation in recent weeks, statues of Columbus have been toppled, splattered with paint or otherwise vandalized. In downtown Los Angeles, a Columbus statue in front of the county courthouse was shrouded in a white sheet, ostensibly for its own protection, after the L.A. City Council voted to rename the paid holiday as Indigenous Peoples Day.

The mayor of New York City, who was born Warren Wilhelm but changed his name to the Italian-sounding Bill de Blasio, had let it be known that the monument in Columbus Circle was at risk. He has appointed a commission to review the political correctness of hundreds of monuments, plaques and statues throughout the city.

New York’s Columbus monument was built and paid for by Italian immigrants in 1892, to honor the 400th anniversary of discovery, around the time the Chicago was preparing to host the World’s Columbian Exposition. Italian Americans are rightly proud of Columbus, but his voyages were actually sponsored and financed by Spain, his crewmen were Spanish, he spoke Spanish and wrote his journals in Spanish.

Americans were already celebrating Columbus on the 300th anniversary of discovery, in 1792, when a Columbus monument was erected in Baltimore. Despite the lack of Italian or Spanish people in the original 13 colonies, the English settlers recognized that Columbus’ discovery of the New World was the event that made America possible.

Our nation’s capital is the City of Washington in the District of Columbia, honoring the two men who made our country, and Columbus’ name is reflected in many other places, including two state capitals (Ohio and South Carolina). For much of the 19th century, the word Columbia was often used as an alternative to America.

As President Trump said in proclaiming the federal holiday, Columbus’ voyages “undeniably and fundamentally changed the course of human history and set the stage for the development of our great Nation.” On Columbus Day, Trump declared, “we honor the skilled navigator and man of faith” for his “courageous feat — even in the face of extreme doubt and tremendous adversity.”

What a contrast with the apologetic tone of Obama’s proclamation one year earlier, which omitted any praise of Columbus or recognition of his greatness. Instead Obama whined that “we must acknowledge the pain and suffering of Native Americans” which he said has been “marked by too many broken promises, as well as violence, deprivation and disease.”

By apologizing for Columbus as a man allegedly responsible for bringing pain and suffering, violence and disease to America, Obama was apologizing for America itself. Such ideas are far too common in our schools and colleges, where Columbus is wrongly accused of oppressing the native people with slavery, white supremacy, and even genocide.

The National Education Association, which supplies teachers to most of our public schools, adopted a resolution that “formal apologies are long overdue to the indigenous people of the United States.” The fierce campaign against Columbus is motivated by hatred for America, and will continue even if his statues survive.

It is impossible to exaggerate how great Columbus was, and how much our world depends on what he accomplished. In the 2,000 years since Jesus Christ, it would be hard to name any one man who achieved so much for the betterment of mankind.

Columbus was, first of all, the greatest sailor and navigator who ever lived up to that time, as detailed by the famous historian Admiral Samuel Eliot Morison, himself a sailor who recreated Columbus’ voyages. Yes, a Viking named Leif Erikson apparently landed somewhere in Canada about 500 years earlier, but Erikson left no permanent settlement or any trace that he was ever here.

Yes, there were people already living in North and South America when Columbus came. By comparison to the European explorers and settlers, however, America’s native people lived in extreme poverty and brutality, lacking the skills that are necessary to build a civilized nation.

Yes, the European settlers brought new diseases such as smallpox that infected the native people (unintentionally, of course), but they were repaid in tobacco, which caused far more deaths among Europeans. Columbus wrote about tobacco in his journal on October 15, 1492, just three days after he arrived in the West Indies.

Among the gifts that Columbus brought to America was Christianity. Evangelization of the native people was a prime motivation for Columbus and his Spanish backers. Columbus gave Christian names to places he visited, such as San Juan (St. John the Baptist), which became Puerto Rico.

What You Need to Know is we are in a proxy war with Russia. Until now, we’ve been able to at least try to say we have given Ukraine defense weapons … END_OF_DOCUMENT_TOKEN_TO_BE_REPLACED

What You Need to Know is a lesson on documents and double standards. Suddenly everyone has classified documents and everyone is spinning the stories … END_OF_DOCUMENT_TOKEN_TO_BE_REPLACED

What You Need to Know is to thank the Freedom 20 who took up the House Speaker fight last week. Get the list here — it only takes 3-5 minutes … END_OF_DOCUMENT_TOKEN_TO_BE_REPLACED

What You Need to Know is Mom first! Life begins at conception. But what if the pro-life movement reframed the battle. What if we advertised that life … END_OF_DOCUMENT_TOKEN_TO_BE_REPLACED