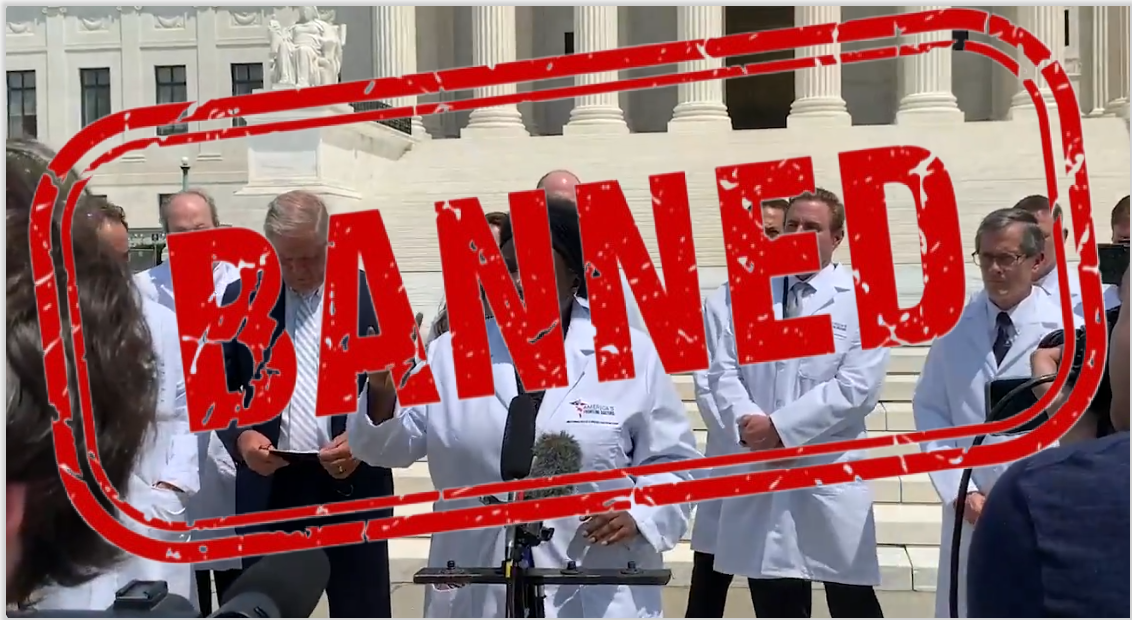 Censorship by Facebook, YouTube, and Twitter is in full throttle in deleting information about the successful treatment of COVID-19, as described Monday by physicians who spoke in D.C. at a press conference. There have been more than 14 million views of a video in which physicians explain how effective hydroxychloroquine (HCQ) has been for their COVID patients, but Big Tech is censoring it.

Liberal, anti-Trump tech monopolies are on the rampage with their modern equivalent of book-burning. Twitter suspended the account of the President’s son, Don Jr., because he dared to tweet out information favorable to HCQ, and Twitter deleted retweets by the president, too.

Amid this blatant censorship, it is time for President Trump to go directly to the American people. By Executive Order he should command release of the more than 50 million doses of HCQ which are being withheld from the public in the Strategic National Stockpile.

President Trump should also order his Secretary of Health and Human Services (HHS), Alex Azar, to post updated lists of where the public can access COVID medication without interference by Never-Trumpers and comrades of Anthony Fauci, who has again disparaged the effectiveness of HCQ despite its success in numerous studies and many countries for treating COVID.

President Trump was right to retweet complaints about interference by Democrats with timely, early treatment for COVID. The election may hinge on whether people are allowed to obtain early treatment for the disease, and blocking access interferes with Trump’s reelection.

Meanwhile, the sudden infection by COVID of 15 Florida Marlins baseball players is alarming not only to baseball fans, but to everyone concerned about the contagiousness of this disease. This casts doubt on whether the NFL football season, which involves more people in closer contact, will proceed.

The liberal fool’s gold of vaccination is opposed by a large part of Trump’s base of supporters. A recent ABC News/Washington Post poll found that nearly 40% of evangelicals are unlikely to get vaccinated against coronavirus, even if it were made available for free.

This opposition to vaccination is even higher among Republicans, and higher still (45%) among strong conservatives, so the resistance is not merely religious. President Trump won in 2016 by garnering a record-breaking 81% of the white evangelical vote.

Reelection of Trump requires holding or surpassing his 2016 share of this massive voting bloc. But that entails appealing to how evangelicals and other conservatives want – and do not want – to address coronavirus.

Many Trump voters do not want the government mandating a vaccine against coronavirus, even if one could be developed. If the virus is the result of bioterrorism, an effective vaccine may not even be possible, or if feasible may be easily circumvented by a mutation of the virus.

Another poll cited on June 30 by the journal Science indicated that merely half of Americans would receive a coronavirus vaccine if made available to the public. The other half are predominantly Trump supporters, and promoting a quest for such a vaccine is not what they want.

Impervious to these numbers, Trump’s advisers have pushed through a $1.95 billion contract for Pfizer to produce a coronavirus vaccine, at taxpayer expense. The pro-vaccine advisers even got Trump to travel to North Carolina to visit a vaccine manufacturing facility on Monday to promote their approach.

The 21-time Grammy winner Kanye West, who has sold 140 million albums and downloads, is an evangelical black rapper who symbolizes potential support for Trump among minorities. His skepticism about a coronavirus vaccine is typical among evangelicals: “So when they say the way we’re going to fix COVID is with a vaccine, I’m extremely cautious.”

“That’s the mark of the beast. They want to put chips inside of us, they want to do all kinds of things, to make it where we can’t cross the gates of heaven,” West added, and millions who do not agree with Kanye’s views are still opposed to mandatory vaccination.

The eagerness with which mega-billionaire Bill Gates seeks a coronavirus vaccine adds to the discomfort. He has heavily promoted population control, while his monopoly over the Windows operating system for computers has subjected many to unwanted influence by his company, Microsoft.

The skepticism expressed by Kanye West to a coronavirus vaccine is not limited to himself, or to evangelicals. No vaccine is even possible before the election, as Fauci himself has said that it takes 12 to 18 months to develop a vaccine.

Trump has a golden opportunity to stand up again for ordinary Americans against the liberal elite and Deep State who are blocking access to inexpensive medication for COVID. He should issue Executive Orders releasing the federal stockpile of medication directly to the American people, and command his HHS Secretary Azar to post where Americans can access HCQ without interference.

What You Need to Know is the Qatar-Europe NGO scandal continues! These global schemes with millions of dollars flowing through non-government … END_OF_DOCUMENT_TOKEN_TO_BE_REPLACED

What You Need to Know is Tucker is allowing the will of the people to be heard! When a huge block of Republicans and so-called conservatives are … END_OF_DOCUMENT_TOKEN_TO_BE_REPLACED

Phyllis Schlafly Eagles · #WYNK: Documents and Double Standards | January 24, 2023 #ProAmericaReport The following is a transcript from the Pro … END_OF_DOCUMENT_TOKEN_TO_BE_REPLACED

Phyllis Schlafly Eagles · February 3 | "Woman" Is the Word of the Year The internet is a powerful tool that most of us use every day. … END_OF_DOCUMENT_TOKEN_TO_BE_REPLACED