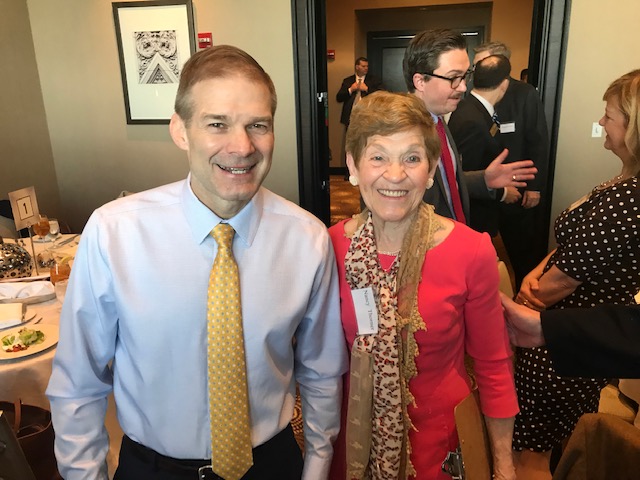 Ohio Congressman Jim Jordan told a private group at Chicago’s Trump Tower this week that the current Democrat Party is the craziest he has ever experienced. Listing the Democrats’ efforts to reject the Electoral College and allow 16-year-olds to vote, Jordan said, “It all boils down to freedom that is under attack.”

During short introductory comments, Rep. Jordan encouraged willingness to accept risk as necessary in today’s political climate.  Quoting columnist Cal Thomas, Jordan said, “I get up every morning and read my Bible and the NYT to see what each side is up to.”

The First Amendment is something to be cherished for it affords the ability to promote Republican ideals and policies, Jordan said.  Then citing what Dick Armey, who served as House Majority Leader from 1995 to 2003, had to say about Republicans: “When we act like us, we win.  When we act like them, we lose.”

Jordan said the Left believes this nation is one of 193 or so countries inhabiting this planet, but “we know she is one of the greatest countries on this planet.”  Describing the present Democrat Party as the craziest he has ever experienced, Jordan then expressed the absurdity of Democrats in wanting to get rid of the Electoral College and in allowing 16-year-olds to vote. Said Jordan, “It all boils down to freedom that is under attack.”

Jordan then went on to describe these three areas of attacks on conservatives:

Big tech:  The search engine of Google, with its five billion hits a day, routinely leads with information that is most favorable to liberals, hiding information of a positive nature from conservatives.  Algorithms employed by Twitter can also prevent the accounts of prominent Republicans, etc., from appearing in search results.  As to shadow banning, it is the cowardly practice of ‘boxing’ social media users without actively banning them. Often the individual may not realize anything is wrong.  Representative Jordan spoke of being shadow banned along with Freedom Caucus members Mark Meadows and Matt Gaetz.

College campuses:  Safe places and free space zones exist on college campuses.  Among the most Orwellian of the trends is the “bias response team.” The idea behind this trend is that students must be protected against any expression of “bias.” If students hear or read anything with “bias” in it that makes them feel badly, there is a place for them to report concerns. Jordan then spoke about a House Oversight Committee in which he asked Dr. Bret Weinstein, a professor at Evergreen State College in Washington state, this question: “In a ‘safe space’ (on a college campus) could you say this sentence? ‘Donald Trump is president.’”  When the professor’s response began with “well, it depends”, Jordan immediately stopped the professor and said, “It’s a fact, there’s no “it depends” about it. Donald Trump was elected as president of the United States on Nov. 8, 2016 and sworn in on Jan. 20, 2017. No amount of “safe space” pretending can change that fact.”

Federal Government: The tax returns of Donald Trump are being demanded from the IRS for one reason only, politics, when only eight years ago conservatives were targeted by the IRS for their political beliefs.  When it comes to free speech, it’s fine for the left to demand it for themselves, but the same is not granted to those of a different persuasion.  Regarding the Mueller “witch hunt” carried out by the FBI against President Trump and others linked to his administration, it represents a stark reminder that the same could happen to any one of us.  Some positive news was that of Congressman Devin Nunes preparing eight criminal referrals to send to the DOJ about leaks and conspiracy amid the Russia probe. Senator Lindsey Graham was likewise lauded for his determination to search for the truth.

Representative Jordan quoted 2 Timothy 4:7 as important to the fight ahead.  In the cited Scripture verse Apostle Paul said, “I have fought the good fight, I have finished the race, I have kept the faith.” This well-known and oft-quoted passage is quite significant in that this epistle was Paul’s last before his martyrdom in A.D. 67.  For Jordan:  Fight, finish, and keep are the key words that speak of action.  When carrying out these directives we must do it with a smile.  Jordan believes it’s better to talk about the loss of our freedoms rather than the ideology of Socialism by itself, as the choice the American people will face in 2020 is between freedom or Socialism.  We don’t have far to look to see a system in Cuba that limits free enterprise and capitalism and denies those freedoms taken for granted by Americans.

As to President Trump, he’s a fighter; he’s not afraid of the Left or of the news media; you couldn’t help but like Trump in a personal setting, and Trump has the charisma and the energy to fight for us and our nation.

In conclusion Jordan stated:  “We will win, but we must stay in the fight with Trump.”

Jordan then opened the floor for questions, including the following:

1. Why the increase in teen suicide?

Jordan attributed lack of discipline and structure as factors missing in the lives of today’s kids, where doing whatever feels good has become the norm.  Discipline was an important part of Jordan’s life in high school and college as a wrestler. Graduating from Graham High School in Ohio in 1982, Jordan was a four-time state champion in wrestling with a career record of 150-1. He went on to the University of Wisconsin where he was a two-time NCAA wrestling champion.  Jordan’s high school wrestling coach, also his physics teacher, talked about the discipline it took to be a wrestler almost every day in class, sometimes to a less than receptive Jordan.

Jordan gave these reasons:  Planned retirements, the timing out of Republican chairmanships, and the anticipation of a tough political climate.

3. Will we see justice served with Attorney General William Barr?

Jordan expressed high hopes for William Barr.  Cited were Barr’s great 3-1/2-page letter summarizing the Mueller investigation and the anticipation of Michael Horowitz’s FISA warrant information in May or June.  Regarding Hillary, Jordan sounded convinced that she is not going to jail.  Aware of the double standard that exists, Jordan stressed the importance of “equal treatment under the law” for the American people to have confidence in their government.

4. What about the growing concern that automation will cause high employment?

As when Edison invented the light bulb and the automobile replaced the horse and carriage, Jordan believes new avenues will emerge to create new jobs. The marketplace must be allowed to work as it has in the past.

5. How would you describe the immigration crisis?

Jordan expressed an urgency to build the wall and to change asylum laws, noting how Congressional Democrats were against cooperating in any way.  Jordan further believes it’s not possible to tackle immigration reform in one big package.

As to why focusing on the fairness issue should be a winning one for Republicans in 2020:

Jordan, in speaking of that long, hot summer in 1776 and why it was appropriate to commit treason to form a new nation, related the following:  Thomas Jefferson had created a new document, the Declaration of Independence.  In marking up the document, there were disagreements about certain sections being displeasing to the King or to the Parliament of England.  Finally, John Adams, having had enough, suggested that we have to offend some one to achieve the freedom we all desire.

What You Need to Know is in 2022, we CAN win! – with one caveat.  There’s one thing we must do, starting tomorrow. Phyllis Schlafly Eagles · … END_OF_DOCUMENT_TOKEN_TO_BE_REPLACED

What You Need to Know is there were 10 Republicans who voted for impeachment. They are the death rattle of the Republican establishment and if they … END_OF_DOCUMENT_TOKEN_TO_BE_REPLACED

What You Need to Know is that LIFE is winning! Today we are celebrating that Missouri no longer has an abortion facility! Thank you to the thousands … END_OF_DOCUMENT_TOKEN_TO_BE_REPLACED

What You Need to Know is the power of the media! We are seeing a concerted effort by the fake news media denying that the underlying issue, and the … END_OF_DOCUMENT_TOKEN_TO_BE_REPLACED

What You Need to Know is you should choose joy over anger! This week the Biden administration plans to reverse many policies that will cause a … END_OF_DOCUMENT_TOKEN_TO_BE_REPLACED

Phyllis Schlafly Eagles · January 19 | Hope Is Yours For the Taking Phony politicians promise the world to get reelected. Nobody wants to be the … END_OF_DOCUMENT_TOKEN_TO_BE_REPLACED

What You Need to Know is we are in a crisis! Wednesday, concerned Americans went to Washington, DC to protest the election that appears fraudulent. … END_OF_DOCUMENT_TOKEN_TO_BE_REPLACED

Tens of millions of Americans remain convinced that Trump won the recent election, as confirmed by polling. This reinforces President Trump’s … END_OF_DOCUMENT_TOKEN_TO_BE_REPLACED

What You Need to Know is the impeachment actions by Nancy Pelosi and the far-left Democrat Congress is based on only their desire to hurt Trump. … END_OF_DOCUMENT_TOKEN_TO_BE_REPLACED

What You Need to Know is Biden is doing irreversible damage to our daughters. After being in office for just a couple of hours, the first thing that Joe Biden does is eliminate the protection that was put in place for women’s sports. This executive order takes away the protection for women’s scholarships, opportunities, and […]

While House Democrats improperly invoke the 25th Amendment to try to remove President Trump, House Republicans should be using the 12th Amendment to give him four more years. Last week 138 Representatives from 35 states voted in favor of Trump by objecting to the fraudulent Biden electors from Pennsylvania. The significance of that vote in […]

What You Need to Know is it’s time to move forward! The narrative the fake news is giving is that the peaceful protest was actually a riot and that President Trump encouraged it during his speech. If you watch the whole speech you can know for yourself that this is not true! Millions of Americans […]

Phyllis Schlafly Eagles · January 22 | Victory In Tragedy Victory can be found even in the most tragic of circumstances. Conservatives should not … END_OF_DOCUMENT_TOKEN_TO_BE_REPLACED