In March of 1976, Phyllis Schlafly called on Americans to do a “moral inventory” of American life, including the criminal justice system. She pointed to a staggering rise in drug crimes, home-grown terrorism, murders, and rapes as justification for this call. Today, America finds herself in much the same shape that she did in 1976, perhaps even worse in some respects. Terrorism is a bigger problem than ever before. Drug crimes have become normalized to an astonishing degree. Violent gangs like Mara Salvatrucha, or MS-13, are terrorizing our streets with abandon. Clearly, the problem is not a political stunt. The problem is just a big, ugly, undeniable problem. Thankfully, Phyllis Schlafly stood ready as ever to give us the solutions back in 1976 that we can still employ today.

Phyllis was not afraid to call the problem like she saw it. In her view, political correctness had no place where the safety of American citizens was concerned. She decried the “terrorists, nuts, criminals, and subversives walking around loose with sticks of dynamite and other weapons.” She brought attention to the violent conduct being normalized in public schools. She warned of a rising drug epidemic taking hold on the nation. If you could not see the date on the Phyllis Schlafly Report, you might think she was talking about today. As the saying goes, “The first step is admitting you have a problem.” Phyllis knew the importance of this step in the political process and made it essential of her work to educate everyday Americans about these problems so a solution could be attained. 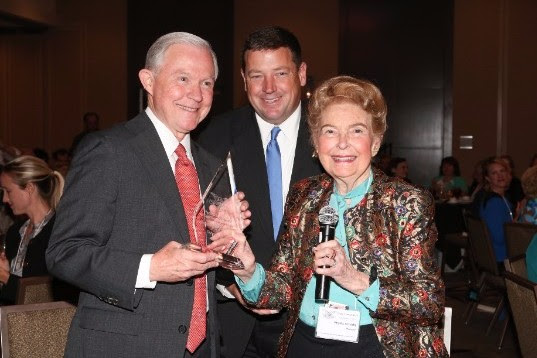 As Phyllis saw it, the real solution was not in front of the problem, but beneath it. At the very foundation of the rising crime rates was a “soft on crime” attitude that let criminals know they could literally get away with murder. Phyllis said, “It ought to be self-evident that most crimes are committed by [career] criminals, and that decent, law-abiding people have been betrayed.” Phyllis believed that a “tough on crime” attitude would not only solve the problem, but would be politically expedient because of its high favorability with most average Americans. Some things should not have to be controversial. When we are faced by violent street gangs like MS-13 who boast 30,000 members internationally and commit countless acts of violence, there should be no question about whether being soft is an option. As actor and columnist Chuck Norris reported in his weekly column, MS-13 “has a major smuggling operation in Mexico, which transports drugs, firearms, prostitution and other human trafficking, including illegal immigrants.” To take anything less than a “tough on crime” approach with these ruthless thugs would be completely illogical.

Nevertheless, the man who has the power to stop MS-13 in their tracks is constantly under attack for trying to do so. He is not attacked by mafia bosses and gangsters, but by liberal fearmongers who vowed to stop the Trump agenda, even if it means more innocent Americans will have to be raped and murdered. The man to which I am referring is none other than Attorney General Jeff Sessions, a tireless patriot and a longtime friend and ally of Phyllis Schlafly. He said “I have a message for the gangs that target our young people: We are targeting you. We are coming after you.” He also said “The MS-13 motto is kill, rape and control. Our motto is justice for victims and consequences for criminals. That’s how simple it is. Prosecute them, and after they’ve been convicted, if they’re not here lawfully, they’re going to be deported.” Attorney General Sessions is just the man we need to crack down on these violent gangs and make America safe again.

The only thing standing between him and that goal is those on the Left who would protect illegal alien gang members above innocent people, including other illegal aliens who would likely be the victims of their crimes. Those heartless leftists do not speak for the average American. As Phyllis Schlafly knew, most people who are not criminals want criminals to be put away. That is why we must be more vocal than ever in our support for Phyllis’s dear friend General Sessions and for the safe streets Phyllis fought to see in every American city and town. With Phyllis’s wisdom and a conservative Trump administration, we can make great things happen. It is up to us to stand behind our conservative friends and see these fights through to victory.

To view the March 1976 Phyllis Schlafly Report in its entirety, please click on the image below. 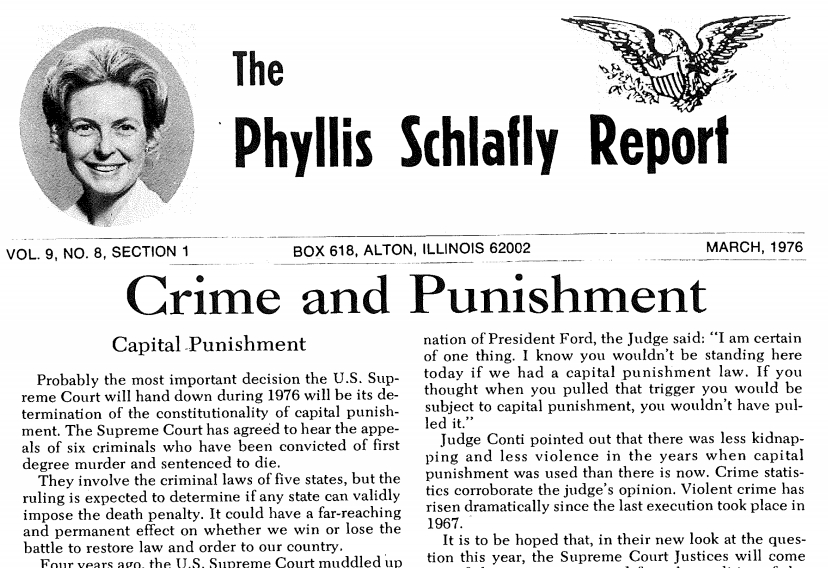 The term “sanctuary city” is one of those dishonest terms the Left uses to make their bad policies sound better. Think about the Affordable Care Act. … END_OF_DOCUMENT_TOKEN_TO_BE_REPLACED

For Immediate Release: September 14, 2022Contact: Ryan Hite, Communications Director Washington, D.C.: "Not to be outdone by the Soros-backed … END_OF_DOCUMENT_TOKEN_TO_BE_REPLACED

What You Need to Know is Liz Cheney is going and gone. Today is goodbye to Liz Cheney day because it’s Election Day in Wyoming. When she’s out of … END_OF_DOCUMENT_TOKEN_TO_BE_REPLACED

What You Need to Know is The Narrative Machine is Obsessed with Trump! First, it used to be called the Trump Exhaustion Syndrome now the left is … END_OF_DOCUMENT_TOKEN_TO_BE_REPLACED

Phyllis Schlafly Eagles · September 20 | LIV Golf Delivers a Hole in One LIV Golf has appeared as the foremost competitor to the PGA, which has led … END_OF_DOCUMENT_TOKEN_TO_BE_REPLACED

Phyllis Schlafly Eagles · September 27 | Do Politicians Care About Teachers? Promises are easy to make and hard to keep, especially in politics. If … END_OF_DOCUMENT_TOKEN_TO_BE_REPLACED