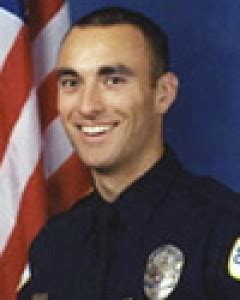 It happened again last week. Another illegal alien criminal, with four previous felony convictions and who had been deported several times, snuck back into the United States and committed a cold-blooded crime.

Zeppetella had served six years in the Navy and Hernandez eight years in the Marines. Both left a wife and infant child, and friends of both officers said their childhood ambition was to be a policeman.

The criminals in both cases were illegal aliens who had been deported for previous crimes but easily returned to commit more crimes. How many policemen will die because of our government’s failure to stop illegal entry into the United States?

In June, Enrique Sosa Alvarez was arrested in San Jose and charged with dragging a nine-year-old girl from her home and raping her repeatedly for three days before releasing her. A fingerprint check identified him as David Montiel Cruz who had previously been convicted of auto theft.

Police don’t know for sure who he is, but we do know for sure he should have been deported after his earlier crime. The ease with which criminals change their names and come back across the border shows the folly of accepting Mexico’s matricula consular as a valid I.D.

Illegal alien Walter Alexander Sorto was repeatedly picked up for driver’s license violations and for not having insurance, but Houston police were barred from reporting his illegal status to federal authorities. In March he and a companion abducted, raped and killed three Houston women.

Maximiliano Esparza, who raped and killed a Bellevue, Washington nun last year, had earlier been in a California prison and the court ordered him deported. But our government didn’t deport him; it merely asked him to sign an I-210, a simple promise to depart, widely known as a “catch-and-release” document.

Only the brutal gang rape of a Queens, New York, woman in December by four illegal aliens has produced a governmental response. Three of those four criminals already had long rap sheets from previous arrests and should have been deported.

The House Judiciary subcommittee on immigration was spurred to hold a hearing in February to question New York and Houston officials about their so-called “sanctuary” ordinances that deter or even prohibit local police from reporting illegal aliens to federal authorities. New York was under such an executive order issued in 1989 by then-Mayor Edward Koch.

On May 30, New York City Mayor Michael Bloomberg signed Executive Order 34 permitting city employees to ask people seeking government services about their immigration status if that is relevant to their eligibility. Bloomberg said his order was necessary to put the city into compliance with federal law, and even Koch came out in support of the Bloomberg order.

Bloomberg’s order, however, has limitations. He said in a written statement that he will never let police or city agencies become an arm of the INS “under my administration.”

But why not? State and local police, of whom we have at least 670,000, are our first line of defense against criminals (not the minuscule 2,000 federal investigators assigned to immigration enforcement). But local police are being shackled by city officials.

Twenty cities, including Los Angeles, San Francisco, Chicago, Miami, Denver, Seattle and Portland, Maine, have adopted “sanctuary” ordinances banning police from asking people about their immigration status unless they are suspected of committing a felony, are a threat to national security, or have been previously deported. But how are the police going to know if they have previously been deported unless they first ascertain who they are?

What happens when alien criminals complete their prison terms? The Justice Department’s inspector general admitted that our government released 35,318 criminal aliens into the general population in 2000, and nobody knows how many then committed other serious crimes.

If the United States can wage a preemptive war against Iraq, local police should be allowed to preempt vicious crimes by checking the citizenship status of persons arrested for minor as well as major crimes, and then reporting illegals to federal authorities. Attorney General John Ashcroft should make sure that all police know about his October 8 speech to the International Association of Chiefs of Police wherein he promised that federal agents will respond when local officers notify them of immigration violators.

All sanctuary ordinances should be rescinded. It is the federal government’s constitutional duty to close our borders to illegal entry and, yes, that means using electronic surveillance and U.S. troops.

What You Need to Know is Ray Epps was in on it! Who is Ray Epps? Congressman Jamie Raskin gave us the answer after the prompting by Congressman Thomas … END_OF_DOCUMENT_TOKEN_TO_BE_REPLACED

What You Need to Know to Understand is the danger of the Narrative Machine! Read this article from Tablet Magazine to help understand the connection … END_OF_DOCUMENT_TOKEN_TO_BE_REPLACED

What You Need to Know is Martha’s Vineyard CNN coverage is funny! 'They enriched us.' Migrants' 44-hour visit leaves indelible mark on Martha's … END_OF_DOCUMENT_TOKEN_TO_BE_REPLACED

What You Need to Know is the media is finally reporting on the Southern Border! Governor Ron DeSantis and Governor Greg Abbott are forcing the media … END_OF_DOCUMENT_TOKEN_TO_BE_REPLACED

Phyllis Schlafly Eagles · #WYNK: Ray Epps Was In On It! | September 27, 2022 #ProAmericaReport The following is a transcript from the Pro America … END_OF_DOCUMENT_TOKEN_TO_BE_REPLACED

For Immediate Release: September 14, 2022Contact: Ryan Hite, Communications Director Washington, D.C.: "Not to be outdone by the Soros-backed … END_OF_DOCUMENT_TOKEN_TO_BE_REPLACED

Phyllis Schlafly Eagles · October 5 | Follow the Science on Monkeypox As Americans try to put Covid behind us, another frightening virus has … END_OF_DOCUMENT_TOKEN_TO_BE_REPLACED