Years before Donald Trump’s presidential campaign and days before the horrific attacks on American soil known as 9/11, the September 2001 Phyllis Schlafly Report went to press warning Americans of the dangers of being soft on the issue of immigration. When the Twin Towers fell, it was a grievously unwelcome fulfillment of Phyllis’s warning. Terrorists from a foreign land took advantage of our lax immigration system to bring about the deaths of thousands of innocent American citizens. As a new generation is being raised up without having lived that tragic day firsthand, we must not allow the lessons of 9/11 to be lost on leaders of the future.

Many felt that the events of 9/11 exposed a clear distinction between good and evil for the first time in a generation. No American debated on the side of the terrorists; we were all united in our stand against this clear and objective evil. However, where America opinion diverged was on what to do about the problem of terrorism on our shores. Many argued that the best solution was to sacrifice privacy to federal law enforcement agencies in order to give them more tools to detect and deter terrorist activity. However, much like knee-jerk reactions by liberals to roll back the Second Amendment in the wake of any gun-related tragedy, the call to reduce privacy rights was short-sighted and did not address the root of the problem. Furthermore, it would severely curtail the constitutional guarantees established by the Bill of Rights.

Phyllis Schlafly believed that the ultimate lesson of 9/11 was to acknowledge the inseparable link between immigration policy and national security. Phyllis wanted to make sure that 9/11 was a wake-up call to the American people that there are indeed people in other parts of the world who would like nothing more than to kill us. We should have an immigration policy which reflects that disillusionment. In this way, the Phyllis Schlafly Report found itself on the cutting edge of a national dialogue in desperate need of direction. As Phyllis wrote in the October 2001 Phyllis Schlafly Report that “The policy of opening our borders to anyone who wants to sneak into our country illegally – or to remain illegally after entering legally – must be exposed and terminated. This is the most important security precaution our government must take.” Those words proved to be indicative of a larger trend in our nation that only those with Phyllis-like insight could see.

Since 9/11, it is clear that Phyllis’s warnings should have been heeded to a much greater extent. So many terrorist attacks since that time could have been prevented by immigration policies that kept a closer eye on those who come legally, keeping out those who would come illegally, and generally raising the standard for who we let in at all. Just to name a few, the 2009 Fort Hood shooting, the 2013 Boston Marathon bombing, the 2015 Chattanooga shooting, the 2015 San Bernardino attack, the 2016 Orlando nightclub shooting, and the 2017 Manhattan attack with a pickup truck all were perpetrated either by immigrants or children of immigrants who clearly were not assimilated into American culture. In the face of so much loss of life, it is sobering to think of what might have happened had Phyllis Schlafly’s warning been heeded from the very beginning.

Thankfully, we now have a president who recognizes the terrorist threat presented by permissive immigration policies which pander more to political correctness than account for the safety of Americans. Using the same arguments as Phyllis Schlafly, President Trump brought the attention of the American people to the real problem of terrorism. It is not that law enforcement agencies are not doing their jobs. It is not that we must relinquish the rights of American citizens in order to stop the killings.

Ultimately, we must remove from non-citizens their presumed right to live on our soil. If someone from another nation has a known affiliation with a terrorist organization or has shown sympathy to them, we should keep them out. If someone is from a nation that has been indelibly supportive of those hostile to America, we should keep them out. No one but American citizens have the inherent right to be in America. While there is nothing wrong with taking in those who are the best and brightest of their homeland, those who have a genuine interest in becoming an American and assimilating to the fullest extent possible, we are under no obligation to take in anybody. As on any issue, the first priority of the federal government should be the protection of American life. From the first Phyllis Schlafly Report after the 9/11 attacks to the present day, this immutable fact remains the guiding principle of true conservative immigration policy.

To view the September and October 2001 issues of the Phyllis Schlafly Report in their entirety, please click on the images below. 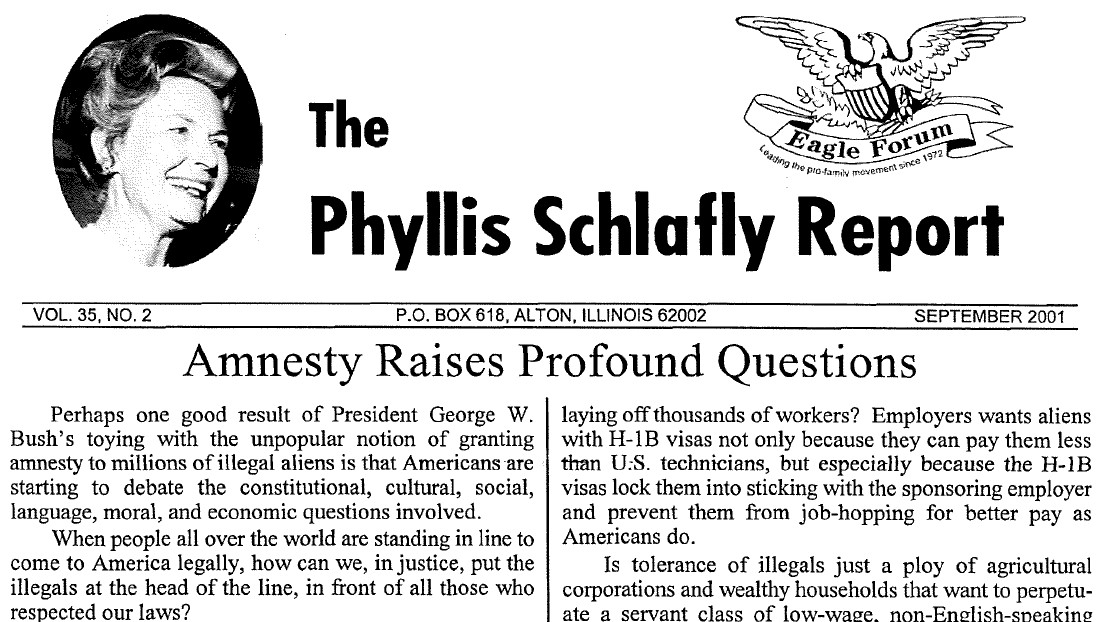 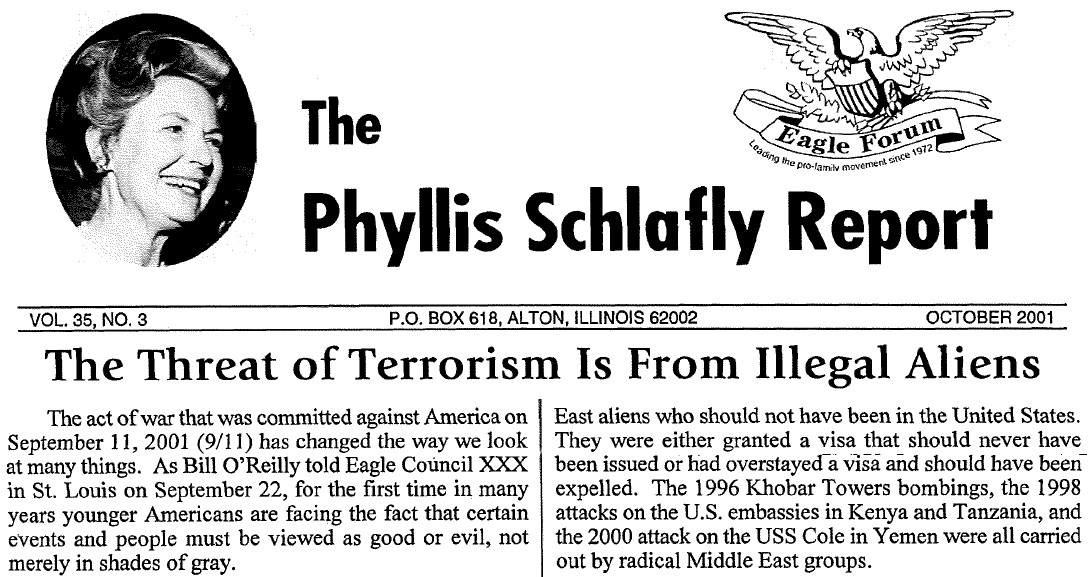 What You Need to Know is the Border is about to be totally open! In just a few days we are going to see around 18,000 illegal aliens crossing our … END_OF_DOCUMENT_TOKEN_TO_BE_REPLACED

What You Need to Know is the immigration invasion is a problem. In the United Kingdom, an Islamic terrorist killed a member of Parliament this past … END_OF_DOCUMENT_TOKEN_TO_BE_REPLACED

Phyllis Schlafly Eagles · October 18 | The Summer Soldiers of Globalism Biden seems to have timed his pullout from Afghanistan, not to minimize … END_OF_DOCUMENT_TOKEN_TO_BE_REPLACED

What You Need to Know is Title 42 is about to expire! What is your preference? Do you prefer we have a secure border and decide who we let in? Or that … END_OF_DOCUMENT_TOKEN_TO_BE_REPLACED

What You Need to Know Feminists don’t what they are doing! They are about to make another marketing error by utilizing all the wrong imagery and … END_OF_DOCUMENT_TOKEN_TO_BE_REPLACED

What You Need to Know is Rand is right again! He’s leading fearlessly against the swamp in Washington. Rand's latest stand undercuts the GOP's Ukraine … END_OF_DOCUMENT_TOKEN_TO_BE_REPLACED