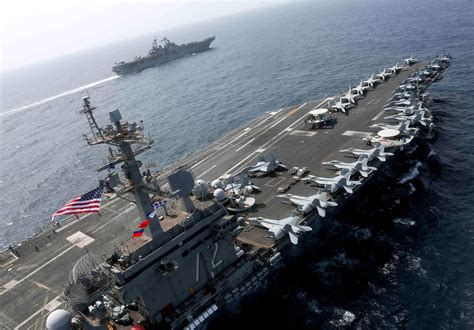 News about Iran and Saudi Arabia has dominated the airwaves. The media attention on this violence in the Middle East managed to goad President Trump to send American soldiers to that region.  But he should resist the temptation to become the world’s policeman. The U.S. must not be drawn into another conflict in the Persian Gulf – regardless of an overhyped provocation.  President Reagan stood patiently by as Iraq and Iran had all-out war against each other from 1980 to 1988. These conflicts halfway around the globe are never-ending.  Henry Kissinger famously said about the war between Iraq and Iran, “It’s a pity they both can’t lose.”

It’s time that the U.S. protects our own soldiers by standing aside while Saudi Arabia and Iran fight each other, if they wish.  We’ve been staying out of an ongoing conflict in Yemen, and we should continue that successful approach in other parts of the world. Thanks to tremendous American inventiveness, capital investment, risk taking, and a lot of hard work, the U.S. has achieved virtual energy independence.  We do not need Persian Gulf oil anymore.

If European countries and Japan depend on oil tankers passing through the Strait of Hormuz, let those nations police that dangerous waterway.  They are wealthy nations which can defend their own interests against Iran. Yes, we have grievances with the revolutionary government of Iran.  As we have with many other countries in the world, from Mexico to China.

Some Republicans were unsettled by Trump’s scathing remarks about George Bush and John McCain, but most came around to support the man who promised to “drain the swamp” in Washington. Now the swamp, also known as the Deep State, is making a determined effort to tempt Trump into fighting a new world war against Iran.

This temptation is akin to Satan challenging Jesus to jump off a lofty temple, and rely on angels to bear him up. In other words, a leap of faith.  A leap into the unknown.

President Trump should heed the words of our Lord Jesus in His response:  “Get thee behind me, Satan!”

What You Need to Know is we are in a proxy war with Russia. Until now, we’ve been able to at least try to say we have given Ukraine defense weapons … END_OF_DOCUMENT_TOKEN_TO_BE_REPLACED

Phyllis Schlafly Eagles · #WYNK: We're In a Proxy War with Russia | January 25, 2023 #ProAmericaReport The following is a transcript from the … END_OF_DOCUMENT_TOKEN_TO_BE_REPLACED

Phyllis Schlafly Eagles · #WYNK: Documents and Double Standards | January 24, 2023 #ProAmericaReport The following is a transcript from the Pro … END_OF_DOCUMENT_TOKEN_TO_BE_REPLACED

What You Need to Know is Mom first! Life begins at conception. But what if the pro-life movement reframed the battle. What if we advertised that life … END_OF_DOCUMENT_TOKEN_TO_BE_REPLACED