The prospect of space-based military defense is an idea going back decades. As early as 1983, President Ronald Reagan used a nationally-televised address to propose the creation of anti-nuclear technology known as the Strategic Defense Initiative. Democrats and the liberal media quickly dismissed the proposal with condescending nicknames like “Star Wars” to describe the initiative. Among Reagan’s biggest supporters outside the scientific community was Phyllis Schlafly, who heavily promoted the Strategic Defense Initiative as the final solution to the Cold War. 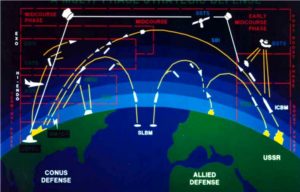 As early as 1983, President Ronald Reagan used a nationally-televised address to propose the creation of anti-nuclear technology known as the Strategic Defense Initiative.

Although SDI was not ultimately implemented as President Reagan envisioned it, there are more reasons than ever to pursue space-based defensive military technology. Common sense will tell you that we have more at stake in space than we did thirty-five years ago. The skies are filled with more than 950 satellites controlling everything from televisions, GPS navigation, weather, credit card authorization, emergency response, and scientific research. Without even realizing it, most Americans rely on satellites on a daily basis to carry out the basic tasks that keep our nation moving forward. Imagine what would happen if a hostile actor managed to bring down these important systems in a coordinated attack.

Such an attack is not a far-fetched plot from an ‘80s sci-fi movie. We are already under direct threat of our satellites being attacked. Since satellites have never been the target of warfare, none of them are armored or come equipped with anti-ballistic technology. All it would take is one well-aimed missile to bring down a massive part of America’s infrastructure. Just to prove a point, China blew up one of their own satellites in 2007. The issue is not whether space will become the battlefield of tomorrow. The issue is who will win when it inevitably does.

President Trump acknowledges this simple fact. That is why he is working with Republicans and Democrats to launch a “Space Force” as a new sixth branch of the military. The technology already exists to make America the premier military force in space. We must revive the spirit of the Reagan Revolution and support President Trump on his Space Force proposal. Only with “Peace Through Strength” can America enjoy the peace of having our interests protected.

Phyllis Schlafly Eagles · #WYNK: Fake History is a Real Problem | August 31, 2022 #ProAmericaReport The following is a transcript from the Pro … END_OF_DOCUMENT_TOKEN_TO_BE_REPLACED

Phyllis Schlafly Eagles · #WYNK: Trump is Stronger Than Biden | January 27, 2023 #ProAmericaReport The following is a transcript from the Pro … END_OF_DOCUMENT_TOKEN_TO_BE_REPLACED

Phyllis Schlafly Eagles · #WYNK: We're In a Proxy War with Russia | January 25, 2023 #ProAmericaReport The following is a transcript from the … END_OF_DOCUMENT_TOKEN_TO_BE_REPLACED

What You Need to Know is we are in a proxy war with Russia. Until now, we’ve been able to at least try to say we have given Ukraine defense weapons … END_OF_DOCUMENT_TOKEN_TO_BE_REPLACED

What You Need to Know is a lesson on documents and double standards. Suddenly everyone has classified documents and everyone is spinning the stories … END_OF_DOCUMENT_TOKEN_TO_BE_REPLACED

What You Need to Know is to thank the Freedom 20 who took up the House Speaker fight last week. Get the list here — it only takes 3-5 minutes … END_OF_DOCUMENT_TOKEN_TO_BE_REPLACED

What You Need to Know is Trump is stronger than Biden. Our American leaders sending tanks and weapons to escalate the war in Ukraine aren’t in line … END_OF_DOCUMENT_TOKEN_TO_BE_REPLACED

Phyllis Schlafly Eagles · #WYNK: Documents and Double Standards | January 24, 2023 #ProAmericaReport The following is a transcript from the Pro … END_OF_DOCUMENT_TOKEN_TO_BE_REPLACED