You may recall that last week’s article dealt with how President Ronald Reagan skillfully overcame media bias by making direct televised appeals to the American people. No other appeal could compare to President Reagan’s televised address on March 23, 1983. In it, he called for the American people to pursue a bold plan to expand defense production and specifically to launch a new missile defense program which would render Soviet nuclear armaments obsolete. His message was a simple one that connected strongly with freedom-loving Americans who longed for peace and prosperity. He said, “The defense policy of the United States is based on a simple premise: the United States does not start fights. We will never be an aggressor. We maintain our strength in order to deter and defend against aggression, to preserve freedom and peace.” Phyllis Schlafly put it another way in her May 1983 Phyllis Schlafly Report. She said, “President Reagan offers our nation the choice: living in terror of nuclear war based on a strategy of retaliation and revenge, or living in freedom based on a strategy of rendering attacking nukes obsolete. In simpler terms, our choice is fear or freedom.”

This proposed missile defense system would come to be known as the Strategic Defense Initiative. Without getting too technical, SDI was a three-layered shield of space-based and ground-based anti-ballistic defense which would stymie any Soviet nuclear warheads that could be launched at the United States or her allies.

Liberals immediately started to criticize or outright mock Reagan’s proposed plan. Their protests against a non-nuclear, non-aggressive system which would save lives rather than avenge them proved that liberals cared more about American concession than global peace. Phyllis Schlafly was quick to point out the diplomatic illiteracy and denial of scientific consensus which fueled the arguments from the left. They scoffed at Reagan’s plan and gave it the nickname “Star Wars” because they thought it was more science fiction than science. Phyllis’s response was twofold. First, she pointed to the many important inventions of the past which were scoffed at before their success, such as the airplane and the atomic bomb. Second, she pointed out the robust team of scientists and advisors encouraging President Reagan to pursue this program. Liberals also claimed that SDI would “destabilize” relations with the Soviet Union and lead to nuclear war before it even went online. Again, Phyllis’s response was twofold. First, she argued that President Reagan had a moral duty to fulfill the Republican Platform which promised to “reject the Mutual Assured Destruction (MAD) strategy of the Carter Administration which limits the President during crises to a Hobson’s choice between mass mutual suicide and surrender.” Second, she argued that only a country with plans to do us harm should have a problem with a missile defense system possessing no offensive capability whatsoever. Ultimately, Phyllis’s arguments proved a compelling force in the debate on this important program.

Although SDI was never fully implemented as President Reagan had envisioned it, the program was still a crucial part of ending the Cold War. Phyllis later wrote that “Mikhail Gorbachev offered every carrot and stick in his arsenal to persuade or intimidate Reagan into abandoning SDI. When Reagan refused, Gorbachev realized the jig was up for the Soviet empire and its delusions of world conquest because the Soviets could not compete with the U.S. military-economic powerhouse.” We should remember the lesson of SDI as we move forward with our important work in defense of the American way of life. We cannot allow pessimistic naysayers from the left to disrupt our dialogue of hope and optimism. Americans can overcome seemingly insurmountable evil just as we have in the past. The only true enemies to our cause are despair and those who would propagate it. So can we build a wall along our southern border? Can we put America first in trade? Can we defeat radical Islam on our shores? The answers lie in the May 1983 Phyllis Schlafly Report: “In religious terms, despair is a sin; in practical terms, despair is self-defeating; in American terms, despair is historically false – we have proved that we are the great ‘can do’ nation.” If conservatives continue to harness this “can do” spirit, we can become an unstoppable force for good in this nation today and for generations to come.

To view the December 1984 Phyllis Schlafly Report in its entirety, please click on the image below. 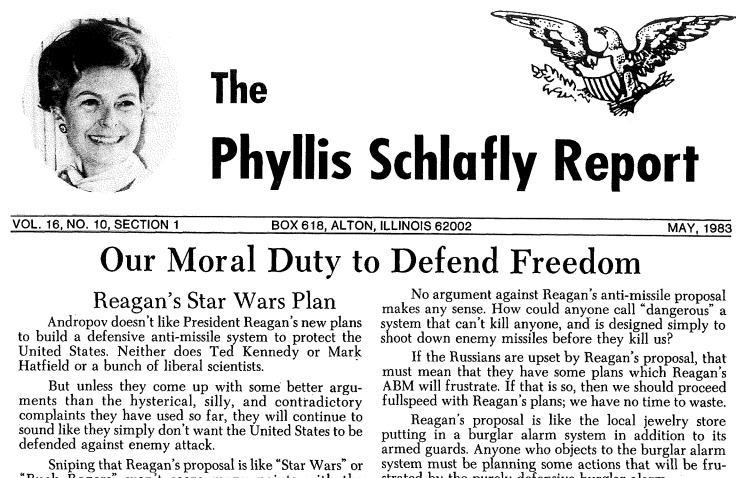 What You Need to Know is Nancy Pelosi and her colleagues are locking the American people into a solitary bubble. People are brainwashed and trapped in … END_OF_DOCUMENT_TOKEN_TO_BE_REPLACED

Phyllis Schlafly Eagles · May 5 | How Effective Is Social Justice Military Recruitment? As Covid subsides, the tyranny that exploited it continues. … END_OF_DOCUMENT_TOKEN_TO_BE_REPLACED

What You Need to Know is Montpelier is going Woke. Soledad O’Brien is now on the board of directors of Montpelier, James Madison’s home. She is part … END_OF_DOCUMENT_TOKEN_TO_BE_REPLACED

Phyllis Schlafly Eagles · #WYNK: Montpelier is going Woke | May 19, 2022 #ProAmericaReport The following is a transcript from the Pro America … END_OF_DOCUMENT_TOKEN_TO_BE_REPLACED

What You Need to Know is our election system is broken! It's failing and We the People have no confidence in the system. Pennsylvania has shown again … END_OF_DOCUMENT_TOKEN_TO_BE_REPLACED

What You Need to Know is Title 42 is about to expire! What is your preference? Do you prefer we have a secure border and decide who we let in? Or that … END_OF_DOCUMENT_TOKEN_TO_BE_REPLACED