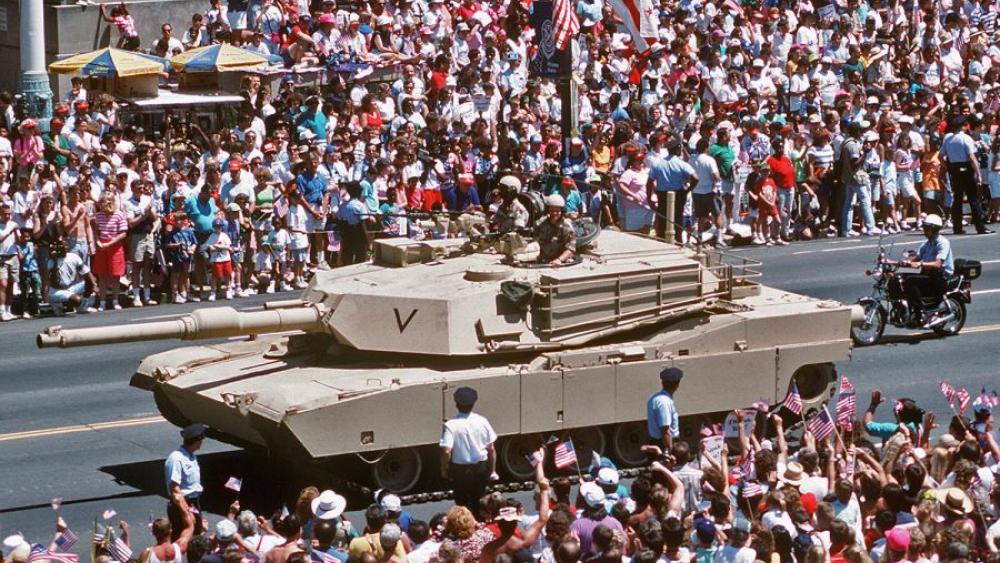 Yet a strange phobia by liberals against including tanks in the festivities erupts again.  President Trump would like to have a few tanks in his upcoming “Salute to America” parade on July 4th, but his opponents have gone hysterical in blocking it.

Why the shrieking protest against tanks in particular, while ceremonial use of military aircraft seems just fine to the Left?  After all, it was the Democrats’ own nominee for president in 1988, Michael Dukakis, who famously posed for a photo-op while riding in a tank during his unsuccessful campaign.

President Trump has long wanted to have a military parade in D.C., proposing it for Veterans’ Day, but he was stymied by exaggerated cost estimates.  This time the phony argument against including tanks is that they might somehow cause harm to our infrastructure, a fancy word for roads. 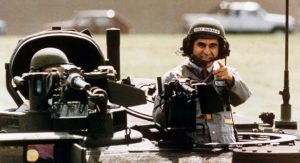 After all, it was the Democrats’ own nominee for president in 1988, Michael Dukakis, who famously posed for a photo-op while riding in a tank during his unsuccessful campaign.

In Michigan, trucks can weigh as much as 164,000 pounds, which is tens of thousands of pounds heavier than the Abrams tank that Trump wants to include in the parade.  Funny how the Democrats have not been howling about the weight of big trucks on our roads, but instead stridently object to Trump displaying tanks without any evidence of harm by them.

The tanks are being delivered to D.C. by the Army’s own railroad system, which is a legacy of the Civil War when the Union took control of all the railroad tracks and bridges in the South.  Any interference with that transportation system was a crime punished by execution, as featured in the classic American short story “An Occurrence at Owl Creek Bridge,” later made into a television drama by Alfred Hitchcock.

Last spring in Europe a massive deployment of tanks and other military vehicles traveled hundreds of miles on ordinary roads without difficulty, in an important test of readiness.  France and other countries regularly feature tanks in their military parades, again without untoward consequences.

But liberals stridently oppose the powerful image of tanks rolling down Pennsylvania Avenue while Trump is president, lest American voters become enthralled by the show of force.  The tank symbolizes military might, and the entire world should see the military hardware that is under President Trump’s command lest anyone think of challenging us.

Nuclear weapons are within the president’s control too, but they do not seem to deter wrongdoing by two-bit dictators around the world.  Military aircraft can be shot down by our enemies, as Iran just did to one of our drones.

In 2017, Trump observed tanks being used in a parade in Paris as part of its celebration of Bastille Day, which is the French equivalent of our Independence Day.  The tanks did not seem to cause any problems for the roads there, so all the fuss by anti-Trumpers here is merely political.

The Abrams tank is manufactured by the Army Tank Plant in Lima, Ohio, which Trump visited in March.  If the treads on this tank somehow damage ordinary roads, which seems unlikely, the manufacturer could surely put softer treads on a few for occasional use in military parades.

Our high-tech aircraft, such as the stealth bomber, are fun to watch and learn about.  But air power alone cannot deter all aggression, as we continue to see countries around the world from North Korea to Iran repeatedly defy us.

The millions of children of World War II veterans do not forget how instrumental the American tank was in winning back Europe from the grip of the Nazis and their “blitzkrieg” style of warfare.  The unforgettable symbolism of the tank, under the direction of President Trump, is the real reason that liberals are doing everything they can to prevent Trump from invoking that image under his leadership.

The tools of Trump’s opponents are fake news, endless lawsuits, and gender politics.  But none of that will seem significant if tanks roll down a wide boulevard adjoining the Mall in D.C, to a salute by President Trump and millions watching on television.

A parade of American tanks might have a sobering effect on rogue nations who want to shoot down our planes or harm our soldiers.  A stealth bomber may not scare a communist tyrant, but the sight of massive tanks driving quickly down a familiar city street is something he would immediately understand.

But Anti-Trumpers have prevailed in blocking tanks from being part of any parade this Independence Day, and may appear only stationary as if they were relics of a bygone era.  The American public should be allowed to see our powerful Abrams tank surging at highway-like speeds, and the rest of the world should see it too.

What You Need to Know is balloons in our hemisphere. As the Chinese weather balloon (read: spy balloon) passes over America, it’s a great time to … END_OF_DOCUMENT_TOKEN_TO_BE_REPLACED

Phyllis Schlafly Eagles · #WYNK: Trump is Stronger Than Biden | January 27, 2023 #ProAmericaReport The following is a transcript from the Pro … END_OF_DOCUMENT_TOKEN_TO_BE_REPLACED

Phyllis Schlafly Eagles · #WYNK: Balloons in Our Hemisphere | February 3, 2023 #ProAmericaReport The following is a transcript from the Pro America … END_OF_DOCUMENT_TOKEN_TO_BE_REPLACED

What You Need to Know is we are in a proxy war with Russia. Until now, we’ve been able to at least try to say we have given Ukraine defense weapons … END_OF_DOCUMENT_TOKEN_TO_BE_REPLACED

What You Need to Know is a lesson on documents and double standards. Suddenly everyone has classified documents and everyone is spinning the stories … END_OF_DOCUMENT_TOKEN_TO_BE_REPLACED

Proving once again that he is in touch with ordinary Americans, Donald Trump selected education for the first video message of his 2024 presidential … END_OF_DOCUMENT_TOKEN_TO_BE_REPLACED

Phyllis Schlafly Eagles · #WYNK: Trump's Record is Baked In | January 30, 2023 #ProAmericaReport The following is a transcript from the Pro … END_OF_DOCUMENT_TOKEN_TO_BE_REPLACED

Phyllis Schlafly Eagles · February 8 | Leftist Hollywood's Downward Spiral Looking back on 2022, it is plain to see that Democrat-dominated … END_OF_DOCUMENT_TOKEN_TO_BE_REPLACED

The Deep State in Washington, D.C. just offered to debrief Trump Administration officials about the hot air balloons that have invaded our airspace … END_OF_DOCUMENT_TOKEN_TO_BE_REPLACED