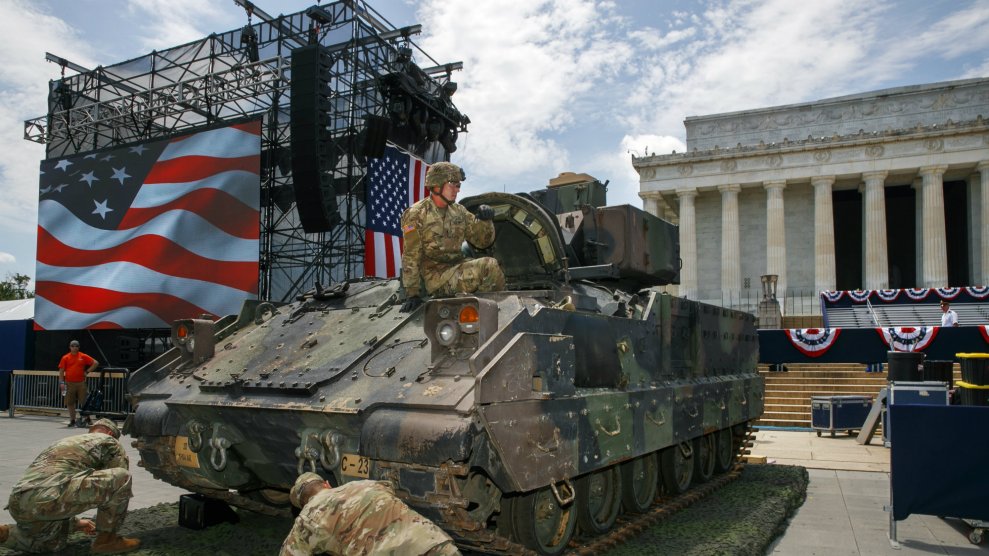 Independence Day celebrations this year featured fireworks, barbecues, and Nathan’s annual hot-dog eating contest on Coney Island.  Spectacular flying performances, including the Blue Angels, adorned the skies. Yet amidst patriotic and military displays, liberals erupted with a strange phobia against including tanks in the festivities at our nation’s capital.  President Trump wanted to have a few tanks in his “Salute to America” parade on July 4th, but his opponents went hysterical in trying to block it.

President Trump has long wanted to have a military parade in D.C. He proposed one for Veterans’ Day, but was stymied by exaggerated cost estimates. This time the phony argument against including tanks was that they might somehow harm our roads and infrastructure.

The reality is liberals stridently oppose the powerful image of tanks rolling down Pennsylvania Avenue while Trump is president.  The tank symbolizes military might, and the entire world should see the military hardware that President Trump commands, lest anyone think of challenging us.

The millions of children of World War II veterans do not forget how instrumental the American tank was in winning back Europe from the grip of the Nazis and their “blitzkrieg” style of warfare.  The unforgettable symbolism of the tank, under the direction of President Trump, is the real reason that liberals are doing everything they can to prevent Trump from invoking that image under his leadership.

The tools of Trump’s opponents are fake news, endless lawsuits, and gender politics.  But none of that will seem significant if tanks roll down the Mall in D.C. in a Salute to America with millions watching on television.

A parade of American tanks might have a sobering effect on rogue nations who ignore our nuclear deterrents, and shoot down our drones and aircraft. They should be reminded of the powerful active might of U.S. ground forces.

But Anti-Trumpers prevailed in blocking tanks from the parade this Independence Day. Instead, they appeared stationary, as if they were relics of a bygone era.  The American public should be allowed to see our powerful Abrams tank surging at highway-like speeds, and the rest of the world should see it too.

Phyllis Schlafly Eagles · December 9 | Are Supporters of America First Scrooges? It’s going to be a long, cold winter in the United States, but … END_OF_DOCUMENT_TOKEN_TO_BE_REPLACED

Phyllis Schlafly Eagles · #WYNK: Trump is Stronger Than Biden | January 27, 2023 #ProAmericaReport The following is a transcript from the Pro … END_OF_DOCUMENT_TOKEN_TO_BE_REPLACED

Phyllis Schlafly Eagles · #WYNK: We're In a Proxy War with Russia | January 25, 2023 #ProAmericaReport The following is a transcript from the … END_OF_DOCUMENT_TOKEN_TO_BE_REPLACED

Proving once again that he is in touch with ordinary Americans, Donald Trump selected education for the first video message of his 2024 presidential … END_OF_DOCUMENT_TOKEN_TO_BE_REPLACED

Phyllis Schlafly Eagles · #WYNK: Trump's Record is Baked In | January 30, 2023 #ProAmericaReport The following is a transcript from the Pro … END_OF_DOCUMENT_TOKEN_TO_BE_REPLACED

What You Need to Know is Trump’s record is baked in. He’s already been torn apart every which way and his record stands with all the things you like … END_OF_DOCUMENT_TOKEN_TO_BE_REPLACED

Phyllis Schlafly Eagles · February 3 | "Woman" Is the Word of the Year The internet is a powerful tool that most of us use every day. … END_OF_DOCUMENT_TOKEN_TO_BE_REPLACED

What You Need to Know is Tucker is allowing the will of the people to be heard! When a huge block of Republicans and so-called conservatives are … END_OF_DOCUMENT_TOKEN_TO_BE_REPLACED