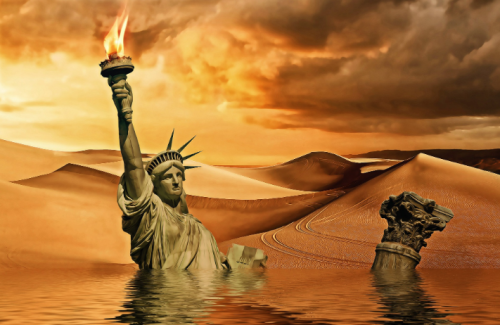 The quack science hoax of so-called “climate change” is used to terrorize the public into believing that their planet will somehow be destroyed by carbon dioxide — the very molecule that has been rapidly re-greening the Earth over the past four decades, according to NASA.

Many of the victims facing psychological terrorism are young children, which has grown more pronounced in children following the promotion of the “Green New Deal” by socialist Rep. Alexandria Ocasio-Cortez (D-N.Y), a member of the United States’ largest Marxist organization, the Democratic Socialists of America (DSA). A.O.C.’s massive Socialist proposal enjoys the support of more than 50 other Democratic representatives as a way to re-organize the U.S. economy along what is deemed to be ecologically sound lines.

As to Rep. Ocasio-Cortez, she had to be shut down on May 23, 2019 by a prominent research meteorologist, Ryan Maue, when claiming that a tornado warning in Washington, D.C. was proof of climate change. Said Ocasio-Cortez on Instagram:  “The climate crisis is real y’all. Guess we’re at casual tornadoes in growing regions of the country?”

To which Mr. Maue responded: “I thought this was fake but it’s from [Ocasio-Cortez’s] Instagram story. No idea what she means with “casual tornadoes” and how this line of severe thunderstorms is proof of any ‘climate crisis.’ It’s just the weather in D.C.”

Firing back at one of her critics, Ocasio-Cortez had the audacity to suggest that even if she won the Nobel Prize in Physics some misogynists would still call her dumb.

Orteso-Cortez, has repeatedly insisted that the world will end in 12 years unless her policies are adopted.  See here a group of activist children pleading with Senator Barbara Boxer to support AOC’s Green New Deal. The children are heard saying:  The earth is dying. We only have 12 years to turn this planet around.

When children are bombarded with doomsday scenarios about irreversible global warming leading inevitably to large numbers of people dying, it is hardly surprising that they feel scared if you are told again and again that there are only 12 years to save the planet, that the future is uncertain and that adults have left you with a catastrophic mess to sort out.

Teachers could help children by putting seemingly apocalyptic data into context. They could show how tipping-point dates have, since the time of Malthus, been passed, with the world’s population not only continuing to exist but thriving. They could show that even the most secure scientific knowledge around climate change is still contestable.  When this doesn’t happen, children start to become fearful about their own future and the future of the planet.

Unfortunate is how so often children in our public schools are being taught to fear what is really a hoax. Evan Sayet, a conservative political comedian, recently came out with a book, Apocali Now!, available on Amazon and Kindle,that depicts ecological catastrophes invented by Leftists for decades.  “Apocali” is the made-up plural of apocalypse.

Evan Savet was born in New York City and went to school in Rochester, New York, later moving to Hollywood to pursue a career as a stand-up comedian and television writer. After 9-11, thinking for the first time about his political and social beliefs, Evan recognized that he had been acting as a knee-jerk Liberal, but was really a conservative at heart. From that moment, he has dedicated himself to conserving and promoting the values of the America that has given him freedom and allowed him to pursue his life of liberty and happiness.  The KinderGarden Eden: How the Modern Liberal Thinks, published by Savet in 2012, became a best-selling book.  Evan Sayet resides in Los Angeles, California, and can be reached at contactevansayet@gmail.com.

Illustrated by nationally syndicated editorial cartoonist A.F. Branco, APOCALI NOW! uses rhyming poetry to tell children about all the false environmentalist scams that leftists have used since the 1970s to promote a big government and even socialist agenda.  Although this is a children’s book, it would also make a great gift for your left-wing friends.

As the book begins, Evan (using a drawing by Branco) shows an illustration of himself reminding his child that global warming was not the first doomsday warning that environmentalists have used to scare children and other people. Back in the 1970s, they warned everybody about “global cooling” and a new coming Ice Age. When that turned out to be a bust, however, they got people in a tizzy about the ozone layer, then acid rain, then bird flu, then swine flu, then mad cow disease, then killer bees. “But, when no one was stung, they kept right on hissing,” Evan writes, “the real threat was that the bees had. . . GONE MISSING!”

The book finishes with its own warning, that all the hysteria about global warming and “climate change” is just a ruse to gain power by needlessly enlarging government and stealing your family’s hard-earned money. “As you can see, my love, it’s not about science. They just want control, and they need your compliance.”

Another writer of note, Burt Prelutsky, has much to say about the plethora of apocali that has gone and come through the years, including the scam behind man-made Global Warming.

Although age separates Sayet and Prelutsky by 20 years, Burt, like Evan is Jewish, both are masters of witty political commentary, and both live and work in Los Angeles, CA.

Burt Prelutsky , a screenwriter, newspaper columnist and author of 8 books, was born in Chicago, IL, moving as a child with his family to CA.  Burt is recognized for work on M*A*S*H (1972), Hobson’s Choice (1983) and Diagnosis Murder(1993). Currently Mr. Prelutsky writes a daily witty political commentary from his home, available only through subscription at Burt Prelutsky@aol.com.

What follows was shared, with Prelutsky’s permission, from two of his recent subscription-only commentaries:

IT’S NOT EASY BEING GREEN

“With all those Leftists insisting the end of the world is near unless we mend our evil ways when it comes to those carbon footprints we keep tracking into the house, it gets harder and harder to take them seriously.

It’s not just Al Gore and Alexandria Ocasio-Cortez who keep warning us that the sky is not only falling but will soon be a kazillion degrees because we insist on heating our homes and driving cars.  We also have Noel Brown, director of the New York office of the U.N. Environmental Program, who paints a very wet and deadly future.

According to Noel Brown, director of the New York office of the U.N. Environment Program, rising sea levels could wipe entire nations off the face of the earth within 10 years.  After that, it will be too late for human beings to prevent the apocalypse.

‘Coastal regions will be inundated; one-sixth of Bangladesh could be flooded, displacing a fourth of its 90 million people.  What’s more, a fifth of Egypt’s arable land in the Nile Delta would be flooded, cutting off its food supply.’

As is often the case with these alarms, this one was first sounded 30 years ago in June of 1989 by Noel Brown.  That’s right.  No more Bangladesh, no more Nile Delta, no more North American wheat, all gone by the year 2000.”

“You would think that by this time, people would have stopped taking the predictions of so-called experts seriously.  For one thing, many of them are, with the passage of time, proven wrong.  For another, many of them are based not on anything even faintly resembling science but are politically motivated.

Just some of the proponents of the doom and gloom narrative have been Jimmy Carter, in 1977, predicting that all the proven reserves of oil in the entire world would disappear before the end of the 80s.  Paul Ehrlich was another. He predicted in his best seller, “The Population Bomb,” that the earth would soon run out of food, leading to massive famines.  He suggested that the only possible answer was to reduce the number of people being born, with abortions being “a highly effective weapon in the armory of population control.”

That, in turn, led the editor of “The Environmental Handbook” Garrett de Bell to recommend that it wasn’t enough to merely slow down the birth rate, but to reduce the Earth’s current population of 3.5 billion to “something less than one billion.”

Rachel Carson was another prophet of doom who also managed to come up with a best seller, “Silent Spring,” not through a mere prediction, but by insisting that DDT was poisoning the earth.  Even though other experts pooh-poohed her fears by drinking the pesticide, she raised such an alarm that she succeeded in getting the stuff banned in the U.S.  Which resulted in its disappearing altogether.  That led to a widespread outbreak of malaria in Africa.

Even before the addled likes of Al Gore, who in the late 90s, gave us 10 years to shape up before the rising oceans would turn Topeka into a salt water lake, or Alexandria Ocasio-Cortez gave us 10 years to shape up before all human life disappeared, others, as an article in The New American pointed out, have been churning out other dire warnings intended to send the Chicken Littles of the world into a frenzy.

For instance, in 1865, a famous 19th century economist named Stanley Jevons predicted that England would run out of coal by 1900 and that the nation’s factories would grind to a stop.

In 1939, the U.S. Department of the Interior was just as certain that America’s oil supply would run dry by 1950.

In 1944, a federal government review predicted that long before now, the nation would have run out of 21 commodities, including tin, nickel, zinc, lead and manganese.

Need we be reminded that back in the ‘90s, based on computer simulations, Al Gore promised that soon baby seals would no longer have to worry about being devoured by polar bears.
The seals are still waiting for his apology, as should we all, the bamboozled and the non-bamboozled alike.”

Michael Crichton, best known as the author of Jurassic Park and the creator of ER, expressed skepticism about the latest environmental crisis of the century (Crichton died unexpectedly of cancer in 2008.).  Crichton’s thoughts on this topic were set forth in a speech given in 2003 at San Francisco’s Commonwealth Club, titled “Environmentalism As Religion.”  This transcript offers some of the key points Crichton made in warning against the politicization of science.,

Kudos to Evan Sayet and Burt Prelutsky for taking on those who are spreading false narratives in the name of science.

What You Need to Know is we are in a proxy war with Russia. Until now, we’ve been able to at least try to say we have given Ukraine defense weapons … END_OF_DOCUMENT_TOKEN_TO_BE_REPLACED

What You Need to Know is a lesson on documents and double standards. Suddenly everyone has classified documents and everyone is spinning the stories … END_OF_DOCUMENT_TOKEN_TO_BE_REPLACED

What You Need to Know is to thank the Freedom 20 who took up the House Speaker fight last week. Get the list here — it only takes 3-5 minutes … END_OF_DOCUMENT_TOKEN_TO_BE_REPLACED

What You Need to Know is we’re in a new pro-life America. Today’s March for Life is the first during which we can celebrate the overturn of Roe v. … END_OF_DOCUMENT_TOKEN_TO_BE_REPLACED

What You Need to Know is about classified documents and presidential power! Joe Biden’s unmasking may be coming, thanks to the GOP House. The DOJ has … END_OF_DOCUMENT_TOKEN_TO_BE_REPLACED

Phyllis Schlafly Eagles · #WYNK: Documents and Double Standards | January 24, 2023 #ProAmericaReport The following is a transcript from the Pro … END_OF_DOCUMENT_TOKEN_TO_BE_REPLACED

What You Need to Know is a brief lesson in original classification authority. You can quibble about whether documents were properly declassified or … END_OF_DOCUMENT_TOKEN_TO_BE_REPLACED

What You Need to Know is the Chinese regime may be on the run. After years of their draconian ‘Covid Zero’ policies that brought more terror to an … END_OF_DOCUMENT_TOKEN_TO_BE_REPLACED

What You Need to Know is Mom first! Life begins at conception. But what if the pro-life movement reframed the battle. What if we advertised that life … END_OF_DOCUMENT_TOKEN_TO_BE_REPLACED

For Immediate Release: January 26, 2022Contact: Ryan Hite, Communications Director Solution Staring Us In the Face to Save American Lives: Shut the … END_OF_DOCUMENT_TOKEN_TO_BE_REPLACED