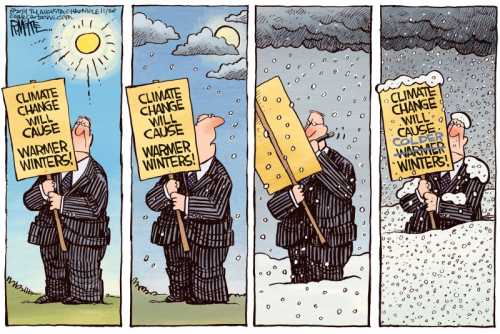 In something that sounds out of science fiction, an article dated November 23, 2018, spoke about how Harvard and Yale scientists are proposing dimming the sun as a way to tackle climate change. The method would involve spraying sun-dimming chemicals into the Earth’s atmosphere.

But what is the real story about “climate change”? Professor Valentina Zharkova broke her silence on November 6, 2018, with remarks at the Global Warming Policy Foundation in October 2018:

“Zharkova was one of the few that correctly predicted solar cycle 24 would be weaker than cycle 23 — only 2 out of 150 models predicted this. Her models have run at a 93% accuracy and her findings suggest a Super Grand Solar Minimum is in the cards beginning 2020 and running for 350-400 years. The last time we had a little ice age only two magnetic fields of the sun went out of phase. This time, all four magnetic fields are going out of phase.”

We should be preparing for the worst weather in centuries — not global warming, but global cooling.

We should be getting ready for the predicted crisis by getting out of debt and away from biofuels that unnecessarily spike food prices. More incentives are likewise needed for producing energy to ride out the cold wave without a huge spike in costs. Instead we are going to once again subsidize the pro-Democrat, anti-capitalist electric car fantasy, which amounts to a gravy train.

Consider a much-anticipated report released on October 8, 2018, in South Korea by the Intergovernmental Panel on Climate Change, a U.N.-sponsored collection of the world’s top scientists.

“The world has already warmed by about one degree Celsius and without a global coordinated effort, the world will reach 1.5 degrees in as little as twelve years. Several hundred million” lives are at stake, according to the IPCC, and the “actions that are required to ensure a just transition to a fossil-fuel free world have significant overlap with the actions that would be needed to reduce global poverty.”

Writing in Real Clear Markets, Aaron Brown looked at the official NASA global temperature data and noticed something surprising. From February 2016 to February 2018, “global average temperatures dropped by 0.56 degrees Celsius.” That, he notes, is the biggest two-year drop in the past century. Not that you’d know it, because it wasn’t deemed news, but does that make NASA a global warming denier?

Meanwhile, a new US government report issued on November 23, 2018, delivered a dire warning about climate change and its devastating impacts, saying the economy could lose hundreds of billions of dollars — or, in the worst-case scenario, more than 10% of its GDP — by the end of the century, which is at odds with President Trump’s own environmental policies and pronouncements.

It just happens that this new US government report comes from the US Global Change Research Program, a team of 13 federal agencies, the Fourth National Climate Assessment was put together with the help of 1,000 people, including 300 leading scientists, roughly half from outside the government. At odds with Trump’s own environmental policies and his own pronouncements.

In a Twitter post, Rep. elect Alexandria Ocasio-Cortez (D-N.Y.) had this to say about the November 23, 2018 Climate Change government report: https://thehill.com/homenews/house/418040-ocasio-cortez-on-climate-change-report-people-will-die-if-we-dont-act-now

“People are going to die if we don’t start addressing climate change ASAP,” wrote Ocasio-Cortez on Friday following the report’s release. “It’s not enough to think it’s important. We must make it urgent.”

Ironically, the U.S. government report was issued at the same time scientists from around the world were meeting in Munich, Germany (November 23 and 24) looking at the latest climate data and analyzing policy implications of embracing the U.N. Diktatsin.

when speaking at the European Institute for Climate and Energy’s (German acronym EIKE) 12th International Climate and Energy Conference as a prebuttal to the United Nations Conference of the Parties to be held on Dec. 4 in Katowice, Poland. The Heartland Institute, located in Arlington Heights, IL, co-sponsored and participated in the EIKE climate conference at the NH Munich East Conference Center which was even live-streamed at EIKE’s YouTube page.

This catastrophic hype about global warming is just more wasteful command and control nonsense of civilization at stake if we don’t act. It will do nothing but make a bad debt and economic situation worse

Failure of Command and Control

As to Leftists, they wouldn’t have standards without double standards.

Just as with sex selection abortion to get rid of unwanted females, what about the silence of feminists — and feminism’s prioritization of “diversity” — on the issue of female genital mutilation (FGM) by power crazed Muslim males?

Another example is of Chief Justice John Roberts who recently rebuked President Trump’s scathing criticism of the federal judiciary — praising the longstanding American tradition of judicial independence. Roberts said Wednesday the US doesn’t have “Obama judges or Trump judges, Bush judges or Clinton judges.” Roberts specifically pushed back against Trump’s description of a judge who ruled against his new hardline migrant asylum policy as an “Obama judge. Yet Roberts sat quietly through President Obama’s 2010 State of the Union Address when Obama sharply attacked Supreme Court justices sitting in the audience for their ruling in the Citizens United case. President Obama falsely claimed in this speech that the Citizens United ruling allowed massive political contributions by foreign corporations. It did no such thing. Only Justice Samuel Alito quietly mouthed to himself “no, no” as Obama railed against foreign campaign contributions. Roberts has said nothing about Obama’s remarks in the eight years since.

Perhaps this was Roberts attempt to virtue signal Trump that he (Roberts) would put the knife in the back of any Trump initiative just like he did in supporting Obamacare.

Hanging tough — compromise not the answer

Hopefully Trump will finally blow the lid off the attempt to illegally spy and disrupt his campaign in 2015-16, even though “the UK is warning that the US president would undermine intelligence gathering if he releases pages of an FBI application to wiretap one of his former campaign advisers.” At least Trump now has a few friendly Republicans like Devin Nunes in the next few weeks to help make sure it won’t be covered up.

It’s time Trump realize he won’t be able to get anything good from a lame duck session and start thinking about winning in 2020. He might as well hang tough. The last thing Trump needs is some sort of “compromise” like Salena Zito, a CNN political analyst and a staff reporter and columnist for the Washington Examiner, floated in her column of Nov. 18, 2018, The right and wrong Lessons from 2018:

“Retaking the majority will require winning some suburban districts. That will involve cutting a deal — giving something (such as the Deferred Action for Childhood Arrivals program) in exchange for border wall funding…”

It’s important for Trump to remember that the present law is with him.

If Trump is able to appoint another Supreme Court Justice should Ginsburg die, even Roberts won’t be able to stop an end to the unconstitutional decree by Obama known as DACA and all the other judge-made laws (like birthright citizenship). All it would take is somebody with some steel heading the DOJ to enforce the immigration law as written and fight any attempt to legislate from the bench to block it. By exposing the Obamagate attempt to destroy the Trump campaign, it would be far easier to get rid of Rosenstein, who aided the Obamagate attempt by continuing the spying in the spring of 2017. Trump must pick someone who is tough to replace Sessions.

If Trump fails to do so at a time when there is nothing to lose after the RINOs led by Paul Ryan (deliberately) lost control of the House, it would indicate that Trump has been totally neutered, despite all Trump has done to put the interests of this nation first:

Trump’s greatest mistake was letting the Bush appointee Sessions pick his own deputy. The DOJ must be cleaned up now. The public must also understand how corrupt the DOJ is and not listen to the media and Democrats, who following Roberts’ lead, howl about “sacred institutions being corrupted by evil Trump”.

Phyllis Schlafly Eagles · #WYNK: Religious Liberty is Under Attack | September 13, 2022 #ProAmericaReport The following is a transcript from the … END_OF_DOCUMENT_TOKEN_TO_BE_REPLACED

What You Need to Know about Open Lawfare against We the People. Biden seems to misunderstand his position as President. If he were king, then … END_OF_DOCUMENT_TOKEN_TO_BE_REPLACED

Phyllis Schlafly Eagles · #WYNK: Who Is Congressman Troy Nehls? | September 28, 2022 #ProAmericaReport The following is a transcript from the Pro … END_OF_DOCUMENT_TOKEN_TO_BE_REPLACED

What You Need to Know is The Narrative Machine is Obsessed with Trump! First, it used to be called the Trump Exhaustion Syndrome now the left is … END_OF_DOCUMENT_TOKEN_TO_BE_REPLACED

Phyllis Schlafly Eagles · #WYNK: It's 1894 In 2022 | September 30, 2022 #ProAmericaReport The following is a transcript from the Pro America … END_OF_DOCUMENT_TOKEN_TO_BE_REPLACED

What You Need to Know is the Monarchy Diminished. The left and the Narrative Machine are going to denigrate the English Monarchy in a significant way. … END_OF_DOCUMENT_TOKEN_TO_BE_REPLACED

“Big Weed” is the $33 billion-dollar marijuana industry that prefers to go by its euphemistic term cannabis. It is spending hundreds of millions of … END_OF_DOCUMENT_TOKEN_TO_BE_REPLACED

Phyllis Schlafly Eagles · August 24 | Anything But Solutions When it comes to addressing his inflation problem, President Biden has said that no … END_OF_DOCUMENT_TOKEN_TO_BE_REPLACED

Phyllis Schlafly Eagles · October 5 | Follow the Science on Monkeypox As Americans try to put Covid behind us, another frightening virus has … END_OF_DOCUMENT_TOKEN_TO_BE_REPLACED