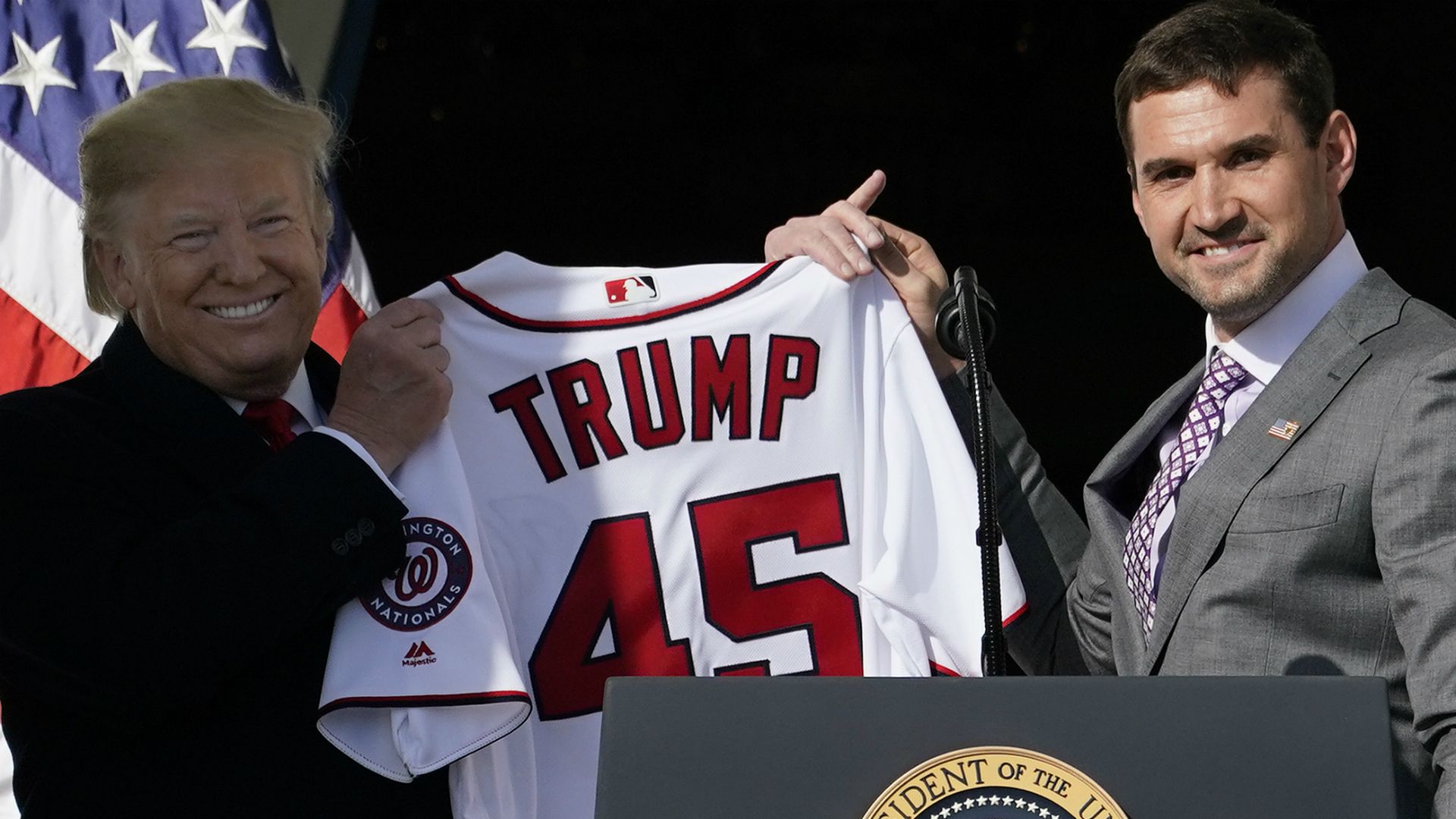 President Trump’s high-profile support of manly sports is scoring points for him in the battleground states.  While Elizabeth Warren and other Democratic contenders are absent from marquee athletic competitions, Trump is being seen by millions of Americans as an ordinary guy cheering alongside the rest of us.

On Monday, Trump welcomed the world champion Washington Nationals to the White House, after having attended Game 5 of the World Series.  Its catcher, Kurt Suzuki, donned a Make America Great Again hat to the consternation of the liberal media.

First baseman Ryan Zimmerman presented a “TRUMP 45” baseball jersey to the 45th President.  The Nationals’ principal owner and 18 of its 25 players attended, despite liberal pressure to boycott the event.

The handful of players who skipped this ceremony mostly did not say why, but potential liberal retaliation against Trump supporters is tainting even our national pastime.  Newspaper reporters dole out MVP awards and Hall of Fame inductions, and a player who skipped the Trump event is contending for an MVP award for which votes have been cast.

On Saturday, Trump is expected to attend a college football game between the top two teams in the nation, LSU and Alabama.  Dubbed the “game of the century,” this is being played deep in conservative Alabama where Trump will be running up the score on Election Day next fall. 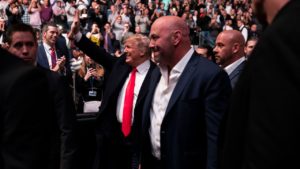 As at any large public event, Trump receives a smattering of cheers and some organized boos, but millions of voters in the heartland appreciate his willingness to attend what Democratic candidates avoid.  Trump’s appearance ringside at the Ultimate Fighting Championship (UFC) at Madison Square Garden last Saturday was a knock-out punch with voters.

All three of these sports – baseball, football, and ultimate fighting – are manly traditions which have become politically incorrect at the liberal universities where Professor Warren comes from.  Millions of women are huge fans of the same competitions which Trump attends, but liberal feminists are not.

A bikini-clad woman, known as a “ring girl,” adorns the ring for ultimate fighting.  But feminists do not like that, and have succeeded in eliminating the swimsuit portion of the Miss America contest.

UFC founder Dana White welcomed Trump at Madison Square Garden, a short cab ride from his Trump Tower in New York City.  During the Republican National Convention which nominated Trump, White predicted correctly that Trump’s “sense of loyalty and commitment will translate into how he will run this country.”

Trump has been doing exactly that, fighting for our country, while congressmen Nancy Pelosi and “Shifty” Adam Schiff do the opposite by concocting a scheme of secret impeachment hearings against Trump.  Rather than cower in political fear in the White House as Richard Nixon did, Trump has come out swinging, to a standing ovation by the American public.

His trip to the small town of Tupelo, Mississippi, attracted a full house at the 10,000-seat BancorpSouth Arena, with many thousands more gathered outside.  “I love him 100 percent,” gushed Mary Ann Gannon there. “He’s the greatest president we’ve ever had.”

On Monday night, amid the backbiting by the swampy Democrats in D.C., Trump held a rally at the 23,500-seat Rupp Arena in Lexington, Kentucky, home of the Wildcats college basketball team.  “This is better than the Final Four,” Trump said, to a raucous ovation inside and by thousands outside.

Even those who were not really Trump supporters are getting in on the fun.  A racehorse named “Covfefe,” after a famous tweet by Trump, recently won the $1 million Breeders Cup at Santa Anita, California.

Voters are siding with Trump in the key battleground states which will decide the upcoming presidential election:  Pennsylvania, Wisconsin, North Carolina, Florida, Arizona, and Michigan. Despite all the Democratic maneuvering about impeachment, Trump leads in these states.

National polls for the presidential election have been almost meaningless, as they should be.  California has the most voters but has made itself politically irrelevant by turning so far leftward.

It hurts the Democratic contenders to continue to pander to voters in California, which moved its primary earlier in order to impact the nomination.  Hillary Clinton racked up millions of extra votes there, but those votes were wasted as Trump won all the battleground states.

“New Poll Shows Democratic Candidates Have Been Living in a Fantasy World,” screams the latest headline from the left-leaning New York magazine.  The Democratic candidates are preaching to their own irrelevant choir, rather than reaching out to independent-minded Democrats in the battleground states where Trump is heading toward a second victory.

Phyllis Schlafly Eagles · #WYNK: Documents and Double Standards | January 24, 2023 #ProAmericaReport The following is a transcript from the Pro … END_OF_DOCUMENT_TOKEN_TO_BE_REPLACED

What You Need to Know is a lesson on documents and double standards. Suddenly everyone has classified documents and everyone is spinning the stories … END_OF_DOCUMENT_TOKEN_TO_BE_REPLACED

What You Need to Know is that about political hit jobs against lawyers. Conservative lawyers who stand up for truth and transparency are being … END_OF_DOCUMENT_TOKEN_TO_BE_REPLACED

Phyllis Schlafly Eagles · #WYNK: Trump is Stronger Than Biden | January 27, 2023 #ProAmericaReport The following is a transcript from the Pro … END_OF_DOCUMENT_TOKEN_TO_BE_REPLACED

What You Need to Know is Trump is stronger than Biden. Our American leaders sending tanks and weapons to escalate the war in Ukraine aren’t in line … END_OF_DOCUMENT_TOKEN_TO_BE_REPLACED