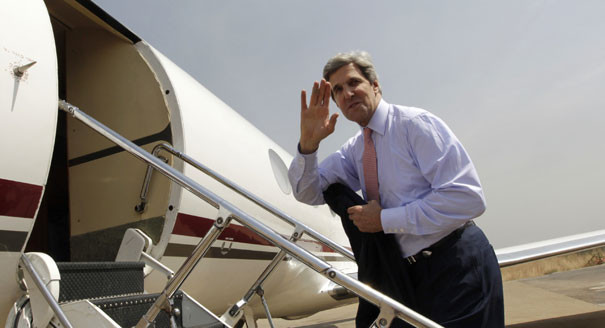 In a headline that could just as easily have come from news satire website the Babylon Bee, Biden climate czar John Kerry was caught taking a private jet for a quick jaunt up to Iceland to receive an award honoring his “leadership” on climate change. You can’t make this stuff up. It would be funny if it weren’t so hypocritical and sad. However, even worse is Kerry’s defense for taking the private jet. He said that taking a private jet is “the only choice for somebody like me.”

Kerry’s words reek with condescension. His “only choice for somebody like me” defense is no defense at all. I have no problem with wealthy people who own private jets. I am a capitalist to the core. If someone is successful enough to afford a private jet, good for them. Maybe they can give me a ride sometime. What I cannot tolerate is the hypocrisy of a climate alarmist of Kerry’s caliber ignoring the very words coming out of his own mouth.

Let’s put some numbers to this hypocrisy. Public flight logs indicate that Kerry’s private jet spent about twenty hours in the air in 2020. Professional estimates indicate that this airtime would result in about 116 metric tons of carbon emissions. By comparison, the average car in America puts out about 4.6 metric tons in a full year. Thus, Kerry’s jet put out the emissions of 25 car years in just twenty hours. I’m not saying John Kerry should take a car up to Iceland to receive his iceberg award, but I think it’s worth asking why he couldn’t take a commercial flight to save the planet.

As long as liberals like John Kerry fly around on their private jets, they have no business wrecking America’s energy sector and destroying tens of thousands of jobs in the name of rescuing Mother Earth. President Donald Trump was able to make America energy independent in record time. President Biden and his cohorts like Kerry want nothing more than to undo everything Trump built for the American people. We can’t let their hypocrisy stand. Kerry should get his head out of the clouds and work for the American people.

What You Need to Know is American drug overdose deaths hit a new record. We are up to 107,000 Americans who have died in the last year because of … END_OF_DOCUMENT_TOKEN_TO_BE_REPLACED

For Immediate Release: May 11, 2022Contact: Ryan Hite, Communications Director Staggering 8.3% Inflation Can Only Be Blamed On Biden's Broken … END_OF_DOCUMENT_TOKEN_TO_BE_REPLACED

Phyllis Schlafly Eagles · May 10 | Politicians Are "Tossed To and Fro" on Energy Policy Ephesians 4:14 in the Bible calls for Christians … END_OF_DOCUMENT_TOKEN_TO_BE_REPLACED

What You Need to Know Feminists don’t what they are doing! They are about to make another marketing error by utilizing all the wrong imagery and … END_OF_DOCUMENT_TOKEN_TO_BE_REPLACED