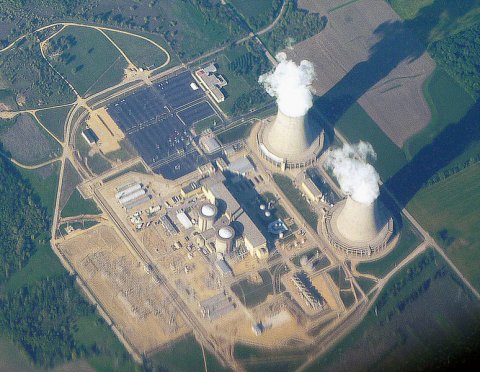 Donald Trump and Joe Biden disagree on a lot of things, but there is at least one issue that they both agree on. America needs to embrace nuclear power as a legitimate solution to our energy needs. Both major candidates see nuclear power as a reliable and carbon-free source of power, yet only 43% of Americans support the expansion of nuclear. What could cause such an unusual situation? It all comes down to one word: misinformation. When most people hear about nuclear power, they think of dramatic meltdowns, radioactive waste, and babies born with two heads. A lot of people’s expertise on the effects of nuclear power comes from old science fiction movies, but just because Godzilla and Spider-Man were victims of nuclear energy doesn’t mean we should be worried about that in the real world.

Meltdowns may have been a legitimate problem at one point, but advancements in cool down technology have made them virtually impossible. Modern Gen IV reactors also produce much less toxic waste while generating more power than ever before. In fact, some modern reactor designs are so efficient that they could be fueled by the nuclear leftovers of the old reactors. In short, advancements have made the worst sticking points a thing of the past.

If you look at other energy sources, it’s clear to see that nuclear is the way to go. Fossil fuels like coal and natural gas are comparatively inefficient methods requiring limited resources. Renewables like solar and wind are not reliable because you need sunny and windy days to keep them going. On the other hand, nuclear power generation is consistent, affordable, and totally carbon-free.

It’s time for Americans to rethink nuclear power. Don’t pay attention to the horror stories from science fiction lore. Look at the real science. Advancements in Gen IV reactors make them the best option for America’s increasing energy needs. There’s a time and place for coal, gas, wind, and solar, but we shouldn’t take any options off the table. Give Gen IV nuclear a chance and I’m sure you’ll see just how powerful it can be.

Phyllis Schlafly Eagles · July 29 | Say No to Stakeholder Capitalism What is the purpose of a business? If I were to ask that question at any other … END_OF_DOCUMENT_TOKEN_TO_BE_REPLACED

What You Need to Know is Nancy Pelosi is so stupid and arrogant that she out-of-nowhere announces that she is going to Taiwan, without letting anyone … END_OF_DOCUMENT_TOKEN_TO_BE_REPLACED

Phyllis Schlafly Eagles · #WYNK: Lies of Climate Change | August 8, 2022 #ProAmericaReport The following is a transcript from the Pro America … END_OF_DOCUMENT_TOKEN_TO_BE_REPLACED

What You Need to Know about the lies of climate change. Our politicians are wasting their time arguing about climate change. Whether you believe Al … END_OF_DOCUMENT_TOKEN_TO_BE_REPLACED

What You Need to Know is that the left always accuses us conservatives of doing exactly what they are doing. Jon Stuart accused Raheem Kassam and Jack … END_OF_DOCUMENT_TOKEN_TO_BE_REPLACED

By launching a surprise attack on President Trump’s home in Florida, while Trump was away, the Biden Administration has breached even its own low … END_OF_DOCUMENT_TOKEN_TO_BE_REPLACED

Phyllis Schlafly Eagles · August 9 | What Would A Real J6 Hearing Look Like? The Special Commission on January 6 wants to turn their hearings into … END_OF_DOCUMENT_TOKEN_TO_BE_REPLACED