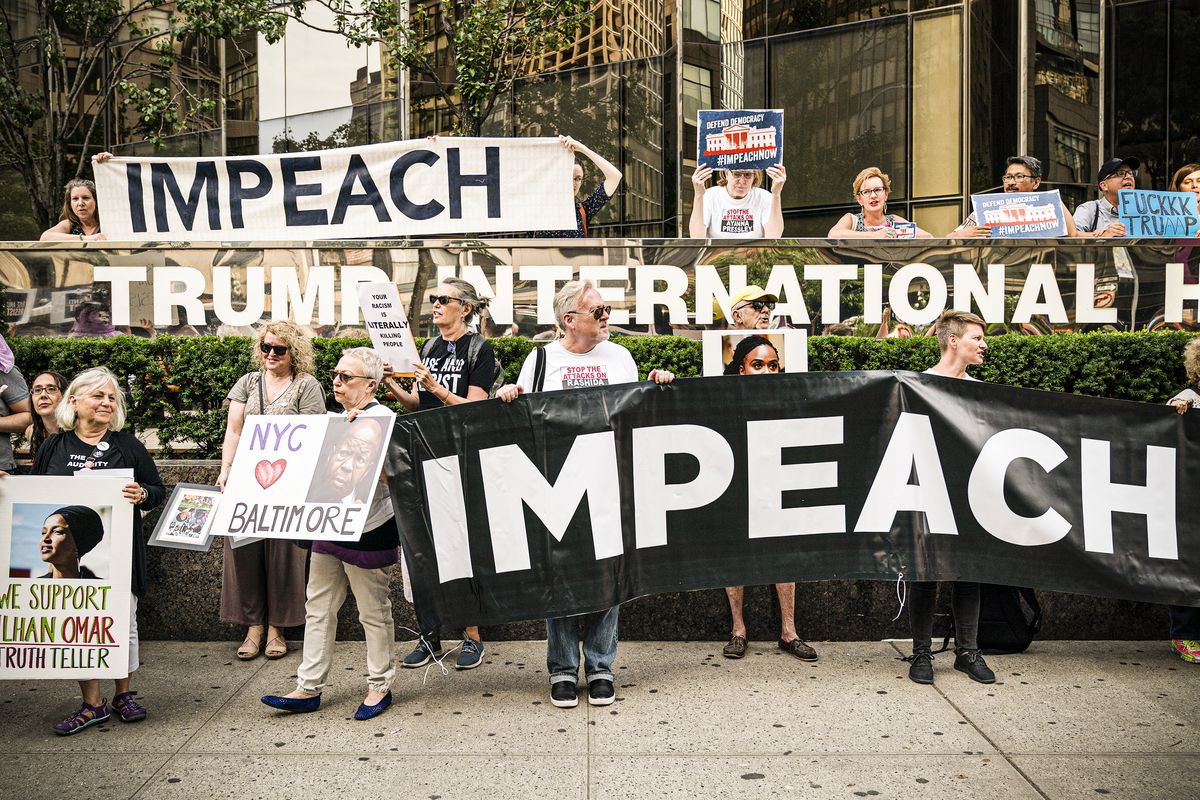 The phony impeachment campaign by Democrats is boosted by an underlying hostility harbored within the Deep State against President Trump’s foreign policy.  Long gone are the days when Democrats were the anti-war party, as their own presidential candidate Tulsi Gabbard (D-HI) laments.

Democrats and entrenched D.C. bureaucrats are united in wanting to send more aid to foreign countries and to perpetually station our troops in distant lands.  The push to impeach President Trump gained steam after he brought our soldiers home from Syria.

“The senior leaders of the U.S. national security departments and agencies were all unified” in wanting President Trump to send military aid to Ukraine, declared impeachment witness Deputy Secretary of Defense Laura Cooper.  When the money stopped flowing for the globalists, they falsely alleged wrongdoing by President Trump.

“It’s in our interest to deter Russian aggression elsewhere around the world,” Deputy Secretary Cooper opined.  But that is an opinion for the President, not the Deep State.

The American people elected Donald Trump to repudiate the globalist mindset that has dominated nearly every president since Woodrow Wilson.  It is not an impeachable offense to stop sending money to foreign countries. 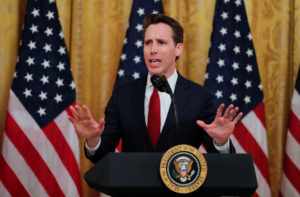 Senator Josh Hawley (R-MO), the youngest member of the U.S. Senate, is a rising conservative star who echoes the America First positions of President Trump.  In a speech on Tuesday, Senator Hawley provided compelling arguments against the globalist agenda of the Deep Staters.

Senator Josh Hawley (R-MO), the youngest member of the U.S. Senate, is a rising conservative star who echoes the America First positions of President Trump.  In a speech on Tuesday, Senator Hawley provided compelling arguments against the globalist agenda of the Deep Staters.

“The American public is rightly skeptical of open-ended commitments and rightly tired of endless wars,” Sen. Hawley declared.  “We find ourselves embroiled in the longest war in our nation’s history, with no discernible end in sight.”

Our “commitments have been paid for in the dearly earned dollars of the American working class, and in the dearly precious lives of American soldiers. …  We cannot remake every nation in our image.”

But there are many enemies of Trump’s America First policy.  A high concentration of those enemies are in the Deep State, the bureaucracy in D.C.

The Democrats’ central witness against Trump could be Lt. Col. Alexander Vindman, but his deposition was more opinion than fact.  Vindman has become the new front man for the Democrats as they decided not to rely further on the secret whistleblower who did not have any firsthand knowledge of any relevant facts either.

An accused person has a due process right to call witnesses.  The President should have rights at least as great as those guaranteed to criminals in our courts of law.

Yet Democrats are refusing to allow Republicans to call as witnesses the whistleblower or Hunter Biden, the son of presidential contender Joe Biden.  What are Democrats afraid of?

Democrats want to avoid full display of their political motivation behind the impeachment proceedings.  The common denominator among the Deep State witnesses against Trump is their disagreement with his America First policy and their disdain for Trump as our Commander-in-Chief.

Nikki Haley, Trump’s former ambassador to the United Nations, earlier rebuffed a scheme by John Kelly and Rex Tillerson to work against Trump from within his administration.  She sets an example for others to defend our president.

“There’s no insistence on that call, there are no demands on that call, it is a conversation between two presidents that’s casual in nature,” Haley stated on the Today show in reference to the call between Trump and the Ukrainian president which is at the center of the planned impeachment.

Democrats allege that Trump tied military aid for Ukraine to a request that it investigate corruption concerning Hunter Biden, son of former Vice President Joe Biden.  On July 25, Trump merely asked Ukrainian President Volodymyr Zelensky for a favor, but there was no quid pro quo.

Haley observes that it was proper for Trump to ask the Ukrainian President to probe corruption.  If the Bidens were not involved in any wrongdoing, then they should have nothing to fear from such an inquiry by the distant Ukraine.

When Joe Biden was vice president, he threatened to withhold $1 billion in aid to Ukraine unless it fired Viktor Shokin, its top prosecutor. Shokin had been investigating wrongdoing at Burisma Holdings, a natural gas company which paid Biden’s son Hunter at least $50,000 a month to serve on its Board of Directors despite his lack of experience.

Nikki Haley points out that “an American should want to know the answer of, ‘Did Biden pressure the prosecutor to, you know, to do what he did?’ And I think there’s a real question there.”

Haley added that “you can question the president, but you also have to question what Biden did.”  Yet Democrats refuse to allow Republicans to call Hunter Biden or the whistleblower to testify, and Senator Lindsey Graham (R-SC) says this failure would render any impeachment “dead on arrival.”

What You Need to Know is the Qatar-Europe NGO scandal continues! These global schemes with millions of dollars flowing through non-government … END_OF_DOCUMENT_TOKEN_TO_BE_REPLACED

Phyllis Schlafly Eagles · December 9 | Are Supporters of America First Scrooges? It’s going to be a long, cold winter in the United States, but … END_OF_DOCUMENT_TOKEN_TO_BE_REPLACED

What You Need to Know is Trump’s record is baked in. He’s already been torn apart every which way and his record stands with all the things you like … END_OF_DOCUMENT_TOKEN_TO_BE_REPLACED

Proving once again that he is in touch with ordinary Americans, Donald Trump selected education for the first video message of his 2024 presidential … END_OF_DOCUMENT_TOKEN_TO_BE_REPLACED

Phyllis Schlafly Eagles · #WYNK: Trump's Record is Baked In | January 30, 2023 #ProAmericaReport The following is a transcript from the Pro … END_OF_DOCUMENT_TOKEN_TO_BE_REPLACED

Phyllis Schlafly Eagles · #WYNK: Trump is Stronger Than Biden | January 27, 2023 #ProAmericaReport The following is a transcript from the Pro … END_OF_DOCUMENT_TOKEN_TO_BE_REPLACED

Phyllis Schlafly Eagles · February 3 | "Woman" Is the Word of the Year The internet is a powerful tool that most of us use every day. … END_OF_DOCUMENT_TOKEN_TO_BE_REPLACED

What You Need to Know is Tucker is allowing the will of the people to be heard! When a huge block of Republicans and so-called conservatives are … END_OF_DOCUMENT_TOKEN_TO_BE_REPLACED