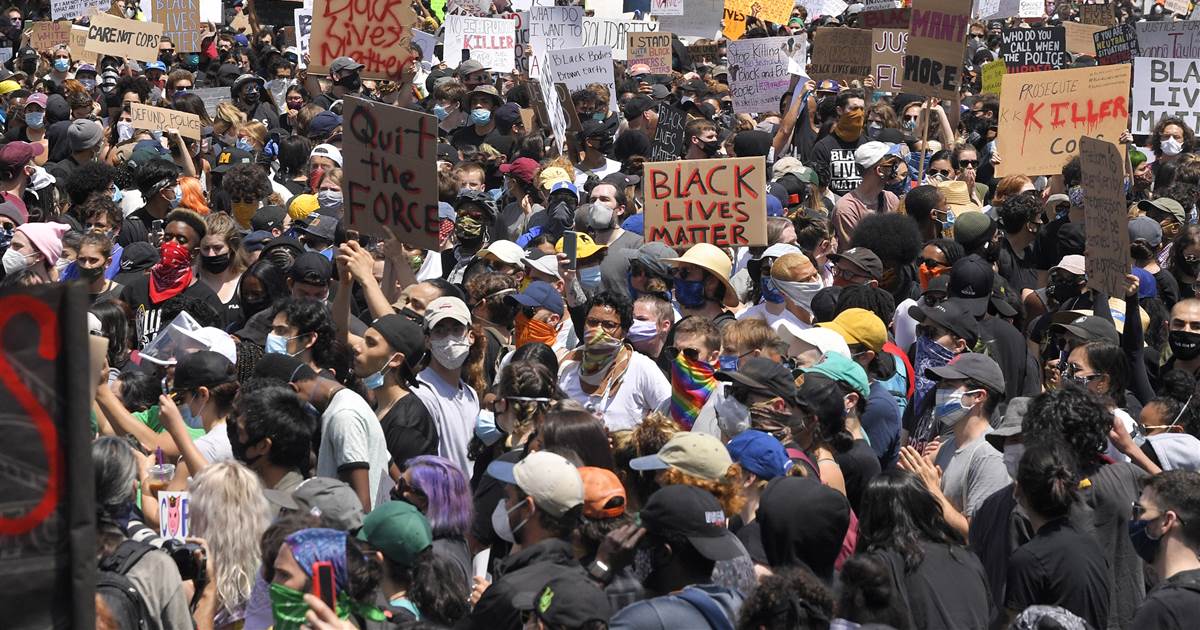 After a second full week of mass demonstrations, protests, riots and civil disorders in over 30 cities, many law-abiding Americans are wondering why we were forced to comply with stay-home orders. Tens of thousands of people have congregated in confined public spaces for the last two weeks, many of them not wearing masks except to avoid being captured on video while they were looting stores or setting buildings on fire.

Whatever happened to the dire warnings of death and disease if ordinary people ventured outside to meet each other in restaurants, bars, and sporting events? Despite massive crowds filling the streets of our major cities, there is no evidence of any spike in cases of people getting sick from COVID-19.

Churches remain closed, unless they limit attendance to 25 people or 25% of capacity and require worshippers to wear masks and stay 6 feet apart from each other. No similar limits or restrictions have been imposed on street protesters, demonstrators, rioters and looters.

Dr. Fauci, Dr. Birx, and other familiar experts from the CDC are suddenly nowhere to be found. In their place, “1,288 public health professionals, infectious diseases professionals, and community stakeholders” published a statement declaring that “white supremacy is a lethal public health issue.”

“Protests against systemic racism must be supported,” even if not done safely, the 1,288 public health professionals wrote in their widely circulated manifesto. “Our first statement must be one of unwavering support for those who would dismantle, uproot, or reform racist institutions.”

“This should not be confused with a permissive stance on all gatherings, particularly protests against stay-home orders” like those who peacefully gathered outside the Michigan State Capitol last month, the experts continued. Those peaceful protests, the experts agreed, were “rooted in white nationalism and run contrary to respect for Black lives.”

One of the peaceful Michigan protesters was Karl Manke, a 77-year-old barber in Owosso, a town of 15,000 people in central Michigan. A judge in Michigan’s Shiawassee County issued an order that Manke’s barber shop “shall be locked and closed,” and agents from the state attorney general’s office showed up in Owosso to enforce the order.

“Courts decide legal questions according to the rule of law,” Justice Viviano continued. “One hopes that this great principle – essential to any free society, including ours — will not itself become yet another casualty of COVID-19.”

In Altamahaw, North Carolina, population 347, Ace Speedway was the scene of stock-car racing last weekend for over 2,000 spectators. The crowd that half-filled the 5,000-seat bleachers was far in excess of the 25-person limit imposed by Democratic Governor Roy Cooper, whose antics are preventing the Republican Convention from meeting in Charlotte in late August.

A sign outside the speedway advertised: “This Event is held in Peaceful Protest of Injustice and Inequality Everywhere.” The Alamance County Sheriff refused to issue a citation because, he said, “my citizens have basically been singled out for the same alleged violations that are occurring all over the State of North Carolina.”

One after another, so-called experts on public health have been proven wrong and forced to revise their earlier statements. The latest about-face comes from the discredited World Health Organization (WHO) which admitted on Monday that it is actually “very rare” to catch COVID-19 from an asymptomatic carrier — someone who is not coughing or sneezing droplets into the air.

“We have a number of reports from countries who are doing very detailed contact tracing,” the WHO spokesman explained. “They’re following asymptomatic cases, they’re following contacts and they’re not finding secondary transmission onward.”

That contradicts the main reason that was given to justify the nationwide shutdown of our economy: fear of infection from people who do not appear to be sick. In the immortal words of Gilda Radner, who was a regular on Saturday Night Live in the 1970s, “Never mind!”

The two most distinguished medical journals in the world are The Lancet, which is based in England, and The New England Journal of Medicine. Last week both journals were forced to retract studies purporting to show that hydroxychloroquine, the same drug that President Trump took (in combination with zinc) to prevent COVID-19, was not only useless but harmful, and even resulted in death.

Both studies claimed to rely on data from many countries around the world, but when suspicious researchers asked to see the raw data, the authors refused to reveal it. These leading medical journals rushed into print with articles that were obviously intended to embarrass President Trump.

Although hydroxychloroquine is approved for off-label use to treat and prevent COVID-19, a number of federal and state restrictions have made it hard to get, even with a doctor’s prescription. Over 35 states have limited its availability, and five states have rules that prohibit doctors from prescribing the drug as a preventive measure.

What You Need to Know is that today, a jury in Washington D.C. convicted Steve Bannon on two counts of contempt of Congress. Bannon’s conviction is a … END_OF_DOCUMENT_TOKEN_TO_BE_REPLACED

What You Need to Know Feminists don’t what they are doing! They are about to make another marketing error by utilizing all the wrong imagery and … END_OF_DOCUMENT_TOKEN_TO_BE_REPLACED

Phyllis Schlafly Eagles · #WYNK: Ray Epps Was In On It! | September 27, 2022 #ProAmericaReport The following is a transcript from the Pro America … END_OF_DOCUMENT_TOKEN_TO_BE_REPLACED

For Immediate Release: September 14, 2022Contact: Ryan Hite, Communications Director Washington, D.C.: "Not to be outdone by the Soros-backed … END_OF_DOCUMENT_TOKEN_TO_BE_REPLACED

What You Need to Know about Priorities & America First. Phyllis Schlafly would give awards to significant people in her life. On these awards … END_OF_DOCUMENT_TOKEN_TO_BE_REPLACED