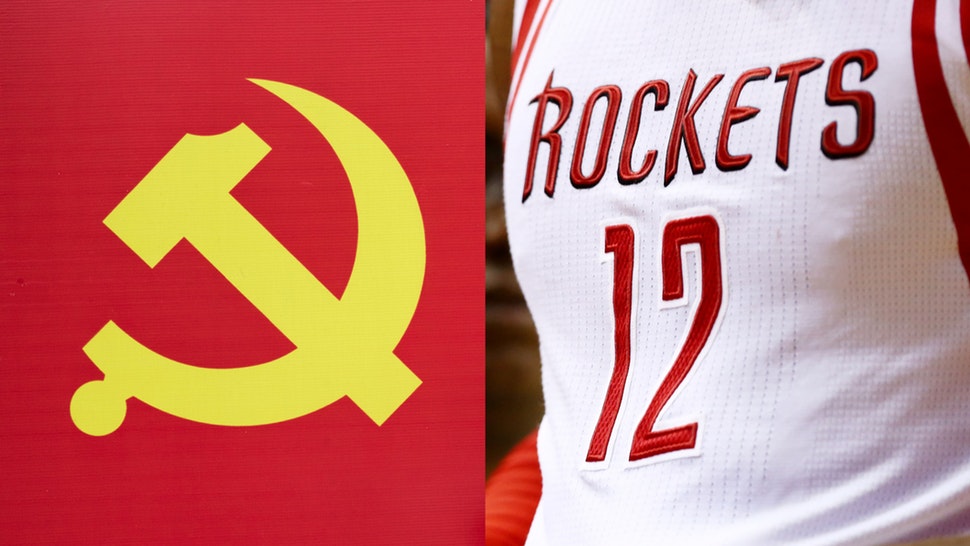 Once upon a time, professional sports were popular entertainment free of political correctness, where fans and players could be themselves and say whatever they liked.  Colorful basketball stars like Dennis Rodman spoke their mind on and off the court, and fans loved it.

But then Nike, a liberal corporation based in Oregon, essentially took over the National Basketball Association (NBA).  The $8 billion business of the NBA became beholden to the $40 billion business of Nike, as sports journalist Jason Whitlock astutely observes.

Nike makes sports shoes but it is so well connected that it became one of 30 companies invited to join the prestigious Dow Jones average on the stock market.  Nike heavily promoted the Trans-Pacific Partnership (TPP), and got Barack Obama and Joe Biden to line up in support.

Then Donald Trump won the presidential election by campaigning against the TPP and phony free trade.

But Nike continues to pander to China anyway, and that is what drives the NBA’s censorship of anyone standing up for democracy in Hong Kong.  Even a CNN reporter was muzzled when she merely tried to ask two basketball players how they felt about this lack of free speech in the NBA. 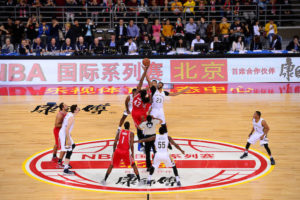 NBA teams are now playing exhibition games in China, but players are prohibited by the NBA from speaking to the press at any time during the tour.  Far from sports bringing two nations together, instead it is inflaming the tensions.

“The NBA has always been a league that prides itself on its players and its coaches being able to speak out openly about political and societal affairs,” CNN journalist Christina Macfarlane began.

She next asked whether this was still true.  An NBA official immediately cut her off and insisted on taking her microphone away.

Nike is behind this censorship, yet almost no one will admit it.  Fortunately at least Jason Whitlock, the African American host of Speak for Yourself, is speaking out against Nike’s manipulation of the NBA.

“This is about a President that won’t cooperate with what Nike wants done,” Whitlock explained. “Nike is using the NBA and its leverage over the NBA to go after this guy because they disagree with him about his policies as it relates to trade in China. It’s very simple.”

LeBron James, who has an estimated $1 billion contract with Nike, said a Houston Rockets executive “wasn’t educated” when he tweeted out in support of democracy in Hong Kong.  LeBron’s comment was baffling until one realizes it echoes the view of Nike, his lucrative sponsor.

NBA teams are now playing exhibition games in China, but players are prohibited by the NBA from speaking to the press at any time during the tour.  Far from sports bringing two nations together, instead it is inflaming the tensions.

Free trade has resulted in censorship and less freedom.  The justification of free trade with China was that it would make China more like us, but instead it has infringed on our rights of free speech which have been a cornerstone of our freedom.

Nike is the same company that funded ads featuring Colin Kaepernick and touting the importance of his right to express himself.  Yet Nike insists that no one in the NBA express himself by criticizing China as millions of protesters in Hong Kong are doing.

In other words, it is OK in the view of Nike to criticize the American Flag and our President, but intolerable for anyone to criticize China.

Television ratings for NBA games are not even half of what they were in the 1990s, and perhaps executives see China as a market where the league might expand.  The Brooklyn Nets were acquired by a Chinese billionaire and suddenly it appears that the entire league has to cater to the Communist state.

The expectation of the British when they agreed to give Hong Kong back to China was that, by now, China would be more like the free world.  But the massive crowds of Hong Kong residents who are demonstrating against China show that it has not changed, at least not for the better.

Fifty years ago, “ping-pong diplomacy” was supposed to soften the communist dictators who have run the mainland since their violent revolution.  After a half-century of no progress, now we have “basketball diplomacy” pushed with the same false hope.

Diplomacy is merely a charade if one side is not allowed to speak up for its values.  With the immense income that the NBA players, owners, and league executives enjoy, one would think they could at least speak their mind a bit.

And yet Nike does not let them.  This big promoter of free trade is an even bigger opponent of free speech, thereby siding with China against freedom in Hong Kong and censoring others who are beholden to Nike.

Nike protected its sale of shoes in China, but cannot appease the resultant anger against LeBron James in Hong Kong.  His jersey is being burned in response to his, or Nike’s, siding with the Chinese tyrants.

Phyllis Schlafly Eagles · #WYNK: China's Hooking Us on Fentanyl, TikTok | October 18, 2022 #ProAmericaReport The following is a transcript from the … END_OF_DOCUMENT_TOKEN_TO_BE_REPLACED

What You Need to Know is we are in a proxy war with Russia. Until now, we’ve been able to at least try to say we have given Ukraine defense weapons … END_OF_DOCUMENT_TOKEN_TO_BE_REPLACED

What You Need to Know is we’re in a new pro-life America. Today’s March for Life is the first during which we can celebrate the overturn of Roe v. … END_OF_DOCUMENT_TOKEN_TO_BE_REPLACED

Predicting an imminent worldwide recession, global business elites convene at the Alps ski resort of Davos, Switzerland as they do every year in … END_OF_DOCUMENT_TOKEN_TO_BE_REPLACED

What You Need to Know is Mom first! Life begins at conception. But what if the pro-life movement reframed the battle. What if we advertised that life … END_OF_DOCUMENT_TOKEN_TO_BE_REPLACED

Phyllis Schlafly Eagles · January 9 | The Unsettling Apple-China Connection Elon Musk has 119 million followers on Twitter, the platform which he … END_OF_DOCUMENT_TOKEN_TO_BE_REPLACED

What You Need to Know is the Chinese regime may be on the run. After years of their draconian ‘Covid Zero’ policies that brought more terror to an … END_OF_DOCUMENT_TOKEN_TO_BE_REPLACED

For Immediate Release: January 26, 2022Contact: Ryan Hite, Communications Director Solution Staring Us In the Face to Save American Lives: Shut the … END_OF_DOCUMENT_TOKEN_TO_BE_REPLACED