If there is one phrase to describe Americans today, it would be the phrase “fed up.” After two terms of a liberal president who lies to the American people and apologizes to every nation for our being the best nation in history, we want a real change. In April 1999, the circumstances were only marginally different. We had a two-term liberal president who directly lied to the American people and pandered to the Anti-America globalists. Most conservatives had about as much Bill and Hillary Clinton as they could handle. So in a landmark Phyllis Schlafly Report, Phyllis spoke for conservatives around the nation with the simple title “I’m Fed Up.” However, her words were far more than an anti-Clinton diatribe. They pointed out fundamental hypocrisies within the Democratic party which still leave Democrats vulnerable today.

The first hypocrisy that Phyllis was fed up with was the sanctimonious spirit of the Left. Conservatives are commonly accused by the Left of having a holier-than-thou attitude about morality, but liberals are the true culprits when it comes to falsely claiming moral superiority. What could be more hypocritical than the male champion of feminism trying to suppress stories of sexual misconduct and objectifying women through his powerful position? That is exactly what happened with President Clinton. Another feminist icon, Hillary Clinton, personally targeted these women and called them liars on national television. As we can now see in hindsight, she and her husband were the real liars.

Liberals who claim some kind of moral superiority should be a bit more careful when choosing their champions. The serious scandals that have been ringing throughout Hollywood are more of the same in this regard. It is no secret that Hollywood has more of an agenda than even Washington, D.C. Yet in a town filled to the brim with liberalism, you will never see the inclusiveness and feminist values that they claim to stand for. Much to the horror of any decent person, women are exploited as sex objects by powerful men who use their influence to force this exploitation. Much to the horror of the feminists, those powerful men are the same ones backing their feminist agenda. As these new revelations come to light, the American people are becoming fed up with the hypocrisy.

Phyllis also pointed out the hypocrisy of liberals calling for nonpartisanship and bipartisanship when things are not going their way. Of course they called on Republicans to be bipartisan when they did not have the majorities, but Democrats fell in line for a fully partisan vote to save President Clinton from being removed from office as a result of his sexual misconduct. Similarly, Democrats criticized Republicans for not being bipartisan in their Obamacare repeal efforts, yet Democrats eschewed any bipartisan input when they were passing it in the first place.

Calls for bipartisanship from the Left are no different than calls for party unity from the Establishment Republicans. They only say things like that when they know they are losing. That is exactly what the Establishment is doing today. Just within the past few weeks, Senator John McCain pointed his finger at conservatives and decried “half-baked, spurious nationalism cooked up by people [That’s you and me] who would rather find scapegoats than solve problems.” President George W. Bush broke his eight years of silence under the Obama administration to take a swipe at President Trump by saying “We’ve seen nationalism distorted into nativism.” Just like Phyllis was in 1999, patriots today are fed up with these kinds of ridiculous statements.

If the Democrats and the Establishment Republicans were smart, they would read the April 1999 Phyllis Schlafly Report. It expertly captures the sentiments felt by Americans in the Age of Trump. We reject the Left’s faux moral assertions and their superlative terminology. We reject their pleas for bipartisanship and party unity as they drown in a sea of their own deceptions. In short, we are fed up.

To view the April 1999 Phyllis Schlafly Report in its entirety, please click on the image below. 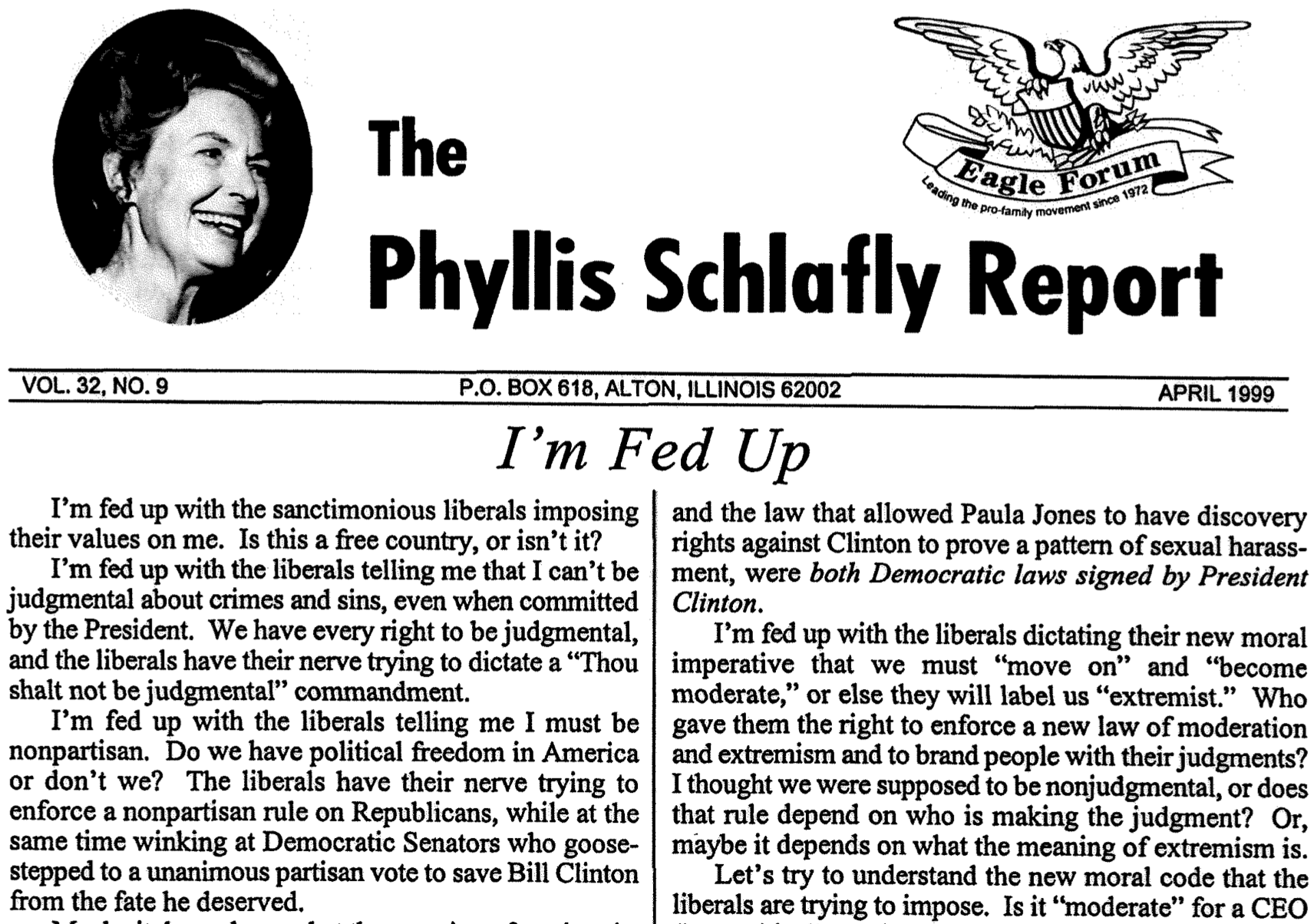 What You Need to Know is life matters across the board because it’s a great gift from God. The moment we’re in for the life movement is really key, … END_OF_DOCUMENT_TOKEN_TO_BE_REPLACED

What You Need To Know about Biden’s worst week as President. Andrea Kaye, guest host of the #ProAmericaReport, explains how this has been the worst … END_OF_DOCUMENT_TOKEN_TO_BE_REPLACED

What You Need To Know is common sense is being thrown out the window. Guest host Andrea Kaye explains that In Missouri, there are lines of people … END_OF_DOCUMENT_TOKEN_TO_BE_REPLACED

Phyllis Schlafly Eagles · November 5 | The Gender Equality of Communism When you think of the communist Soviet Union, what do you think of? The … END_OF_DOCUMENT_TOKEN_TO_BE_REPLACED

If the education establishment wants to know why public schools don't get much respect from our citizenry, they need look no further … END_OF_DOCUMENT_TOKEN_TO_BE_REPLACED

Robert Strange McNamara belongs on the daytime soap operas. Better yet, his histrionics belong on Donahue or Geraldo or Sally Jesse Raphael. We are … END_OF_DOCUMENT_TOKEN_TO_BE_REPLACED