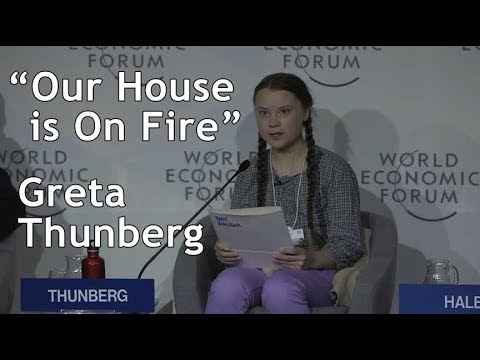 Most of America has heard of Greta Thunberg, the Swedish teenager who spends her time traveling around telling world leaders to either destroy their countries economies right now or watch the world collapse in a colossal ball of flame. Most world leaders have sat passively by to let this teenager chew them out. However, Treasury Secretary Steve Mnuchin decided he wouldn’t bow to the climate change cult. In an important press conference at the World Economic Forum, he witfully told Greta he might take her seriously after she “goes and studies economics in college.”

Secretary Mnuchin made two very important points with what he said. First, he was pointing out that the radical changes demanded by the climate change alarmists would have a catastrophic effect on the world economy. Completely ceasing all use of fossil fuels would leave people without electricity or transportation throughout the globe. Countless billions would suffer. Sure, the wealthy would find ways to install solar panels on their mansions and fork over wads of cash for electric cars, but the poor and starving wouldn’t be so lucky.

The other big point Mnuchin made was that it would be foolish for the people of the world to develop their economic and environmental policy based on the rantings of an adolescent. I’m not trying to be mean about it, but there’s a reason people go to high school and college. In theory, they are supposed to learn more about how the world works before embarking on professional careers. Liberals can’t just make a child their leader and then shoot down all of their opponents arguments with horror that someone would criticize a child. What Greta Thunberg says would be ridiculous no matter who’s mouth it comes out of.

For all of Greta’s anger and passion, there’s not a lot of substance. The biggest polluters aren’t even the ones Greta yells at. If she really wants to make a difference, she should be trying to convince China and India to cut back on emissions. Maybe she will figure that out whenever she takes Mnuchin’s advice and goes to college, but I doubt it.

Phyllis Schlafly Eagles · May 19 | Boys and Girls and Grades? ** Previously recorded by Phyllis Schlafly // May 2015 ** Colleges claim they … END_OF_DOCUMENT_TOKEN_TO_BE_REPLACED

For Immediate Release: May 10, 2022Contact: Ryan Hite, Communications Director Concerned Parents Are the Driving Force of Local and Midterm … END_OF_DOCUMENT_TOKEN_TO_BE_REPLACED

What You Need to Know is American drug overdose deaths hit a new record. We are up to 107,000 Americans who have died in the last year because of … END_OF_DOCUMENT_TOKEN_TO_BE_REPLACED

For Immediate Release: May 11, 2022Contact: Ryan Hite, Communications Director Staggering 8.3% Inflation Can Only Be Blamed On Biden's Broken … END_OF_DOCUMENT_TOKEN_TO_BE_REPLACED

Phyllis Schlafly Eagles · May 10 | Politicians Are "Tossed To and Fro" on Energy Policy Ephesians 4:14 in the Bible calls for Christians … END_OF_DOCUMENT_TOKEN_TO_BE_REPLACED