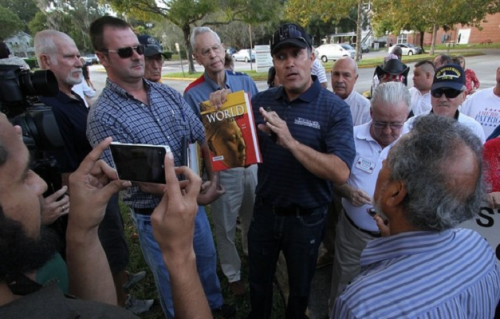 While some have attributed the controversy of promoting Islam in the classroom to the Common Core standards, what is closer to the truth is that the same philosophy that has encouraged parents to leave educating their children to “the experts” has produced both Common Core and the teaching of Islamic beliefs in the classroom by allowing the progressive elites to take decision making about children away from parents and transferring it to government bureaucrats.

As for teaching history, for years an underlying premise embraced by many on the Left is that there is a moral equivalence between cultures, which means America can’t be considered better or greater than any other county.

The Wall Street Journal provided this overview of the situation in regard to Islam in the classroom:

“Language about Islamic history in school textbooks is spurring battles across the nation, with some parents’ groups and lawmakers objecting to what they see as an overly benign portrayal of the religion’s spread and its teachings.”

Many parents contend that the line has already been crossed in regard to Islam in the classroom.

Read here some of the most notable incidents of protests and challenges to educational materials about Islam from around the country from Dec. of 2013 to April 20 of 2017.

More recent instances of parental protests in 2018 include:

In May of 2018, a seventh-grade student brought home a packet of lessons and assignments from Mountain Ridge Middle School in West Virginia which included the following:

The daughter’s father, Mr. Penkoski, told her she was not going to do the assignment and he immediately complained to the principal.

In June of 2018, a parent sued the school system in Chatham, New Jersey for forcing 7th grade students to watch a set of videos in their World Cultures and Geography class that essentially proselytize for Islam. One five-minute video declares that:

The video ends with an invitation of sorts: “May God help us all to find the true faith, Islam.”

The above cases are being represented by the Thomas More Law Center, which is hoping to set a precedent in the Supreme Court so other lawyers and parents can use it to stop the indoctrination of other children.  But a problem does exist. The court system itself is basically geared toward multi-culturalism, towards preventing the courts from being called bigoted or Islamophobic.

School districts all over the country are violating the Establishment Clause of the First Amendment, which requires that schools must maintain neutrality towards all religions.  The Supreme Court and ACLU have made it very clear that the Christian religion cannot be present in any way in public school systems, but not so with other religions.  Teaching Islam, over other religions in social studies, is happening under the guise of multi-culturalism and is further being advanced through the perception that Islam is the proper, peaceful religion in teaching social studies.  President George W. Bush entertained this idea when he declared Islam “a religion of peace” days after 9/11.

When and if Christianity is taught, emphasized is the persecution of Christians by Christians without any historical context, when Christians, for the most part, were taking back land that had been taken by the sword of Islam.  In contrast, teaching of Islam leaves out the violent history of Islam and that Islam was rejected by most of those to whom Muhammad preached until the sword to win converts.  Never mentioned is that Islam has been responsible for more deaths in the name of their religion than all despots like Hitler and Stalin.

It would be unthinkable to force a Muslim to invoke John 3:16, but forcing student to say the Shahada is quite acceptable (Shahada is the conversion creed for Islam: “There is no god but Allah, and Muhammad is the messenger of Allah.” It is one of the Five Pillars of Islam.)  There would be a great outcry from the ACLU and other leftist groups if children were made to recite “There is no God but Jehovah, and Jesus is His Son.”

Availability of source material for teachers

Teachers have access to multiple sources on the internet for teaching Islam from K-12.  If promoting Islam is what’s in the brain of teachers — many of whom are products of liberal colleges and universities, versed in a revisionist view of history — students will experience a greater emphasis on it.  Thorner has listed the following two sites that merit attention:

Funding for ACCESS ISLAM was provided by the U.S. Department of Education in 2005

A petition was circulated without success, to have Secretary of Education, Betsy Devos, dump Access Islam from the public schools and acknowledge that it is a violation of the U.S. Constitution.  The Education Department offers no similar learning material for Christianity, Judaism, Hinduism or any other major world religion.  Just Islam.

On March 29, 2017, Tucker Carlson had a segment on his Fox News show about the U.S. Government funding Islamic indoctrination.

Through this nation’s America’s Middle-East studies curriculum, the Saudis have taken a surprising degree of control over America’s education.  The system of federal subsidies to university programs of Middle East Studies (under Title VI of the Higher Education Act) has been serving as a kind of Trojan horse for Saudi influence of American K -12 education.  Federally subsidized Middle East Studies centers are required to pursue public outreach, which entails designing lesson plans and seminars on the Middle East for American’s K-12 teachers.  These university-distributed teaching aids slip into the K-12 curriculum without being subject to the normal public process. Textbook curriculum is further provided by the Middle East National Resource Centers, which are federally funded by Title VI.

It seems that Saudi influence on the U.S. education system is working.  Young people view Muslims and their faith more favorably than do other age groups.

Parents have to know that they have to pay attention to what their children are learning in their public school system. It’s not enough to glance over textbooks because teachers are getting their lessons from the internet, “where there is no vetting” to ensure the information is accurate or that it meets educational standards.

Traditionally it was believed that the school’s job was to transmit not only knowledge, but also cultural heritage. In addition to learning the ABCs, school was also the place where you learned the story of your nation, your culture, and your civilization.  You learned that although there were shameful episodes in American history, there was much of which to be proud.  In turn, teachers felt a responsibility to tell the story of American history as objectively as possible

Today’s students can tell you about the sins of the West, but they lack the unifying ideals that hold the U.S. together as a society.

The clash of civilizations is underway between the West and Islam, and Muslims intend to win.  Educational institutions can no longer afford to take the relativist view that one system or society is as good as another. They need to learn to take their own side as they have a dog in the fight.

What You Need to Know is the immigration invasion is a problem. In the United Kingdom, an Islamic terrorist killed a member of Parliament this past … END_OF_DOCUMENT_TOKEN_TO_BE_REPLACED

Phyllis Schlafly Eagles · October 18 | The Summer Soldiers of Globalism Biden seems to have timed his pullout from Afghanistan, not to minimize … END_OF_DOCUMENT_TOKEN_TO_BE_REPLACED

What You Need to Know is Republicans cave on gun rights. Senate Republicans have put on full display the ruling class uniparty by compromising with … END_OF_DOCUMENT_TOKEN_TO_BE_REPLACED

What You Need to Know is the Cartels Control the Border! The drug cartels control America's borders and our sovereignty. We are seeing more caravans … END_OF_DOCUMENT_TOKEN_TO_BE_REPLACED

What You Need to Know about the Power of Lawfare. The use of the legal system against We the People is getting more and more sophisticated. This was … END_OF_DOCUMENT_TOKEN_TO_BE_REPLACED

Phyllis Schlafly Eagles · #WYNK: Montpelier is going Woke | May 19, 2022 #ProAmericaReport The following is a transcript from the Pro America … END_OF_DOCUMENT_TOKEN_TO_BE_REPLACED

Phyllis Schlafly Eagles · April 29 | When Will We Cancel Darwin? For those of you who haven’t heard, cancel culture is the latest trend among … END_OF_DOCUMENT_TOKEN_TO_BE_REPLACED

What You Need to Know is about Carson v. Makin. This decision ruled that you cannot focus and discriminate against private schools — Supreme Court … END_OF_DOCUMENT_TOKEN_TO_BE_REPLACED

What You Need to Know is Pelosi, pills, and pain. Pelosi has failed us again: she is the only dictator in American political life. She dominates the … END_OF_DOCUMENT_TOKEN_TO_BE_REPLACED

What You Need to Know is we are in a unique moment and Donald Trump is stepping up to it. Even some of the rabid leftists have to admit that President … END_OF_DOCUMENT_TOKEN_TO_BE_REPLACED

For Immediate Release: May 27, 2022Contact: Ryan Hite, Communications Director Pro-Life Americans Will Not Be Silenced By Pro-Abortion Scare … END_OF_DOCUMENT_TOKEN_TO_BE_REPLACED

What You Need to Know is Pelosi is Wrong or Lying. The archbishop came out saying that Speaker Nancy Pelosi will be denied Holy Communion because of … END_OF_DOCUMENT_TOKEN_TO_BE_REPLACED

By Mason Mohon, Phyllis Schlafly Eagles Intern Abortion is the most controversial issue in the United States today, with both sides having great … END_OF_DOCUMENT_TOKEN_TO_BE_REPLACED