Try, try again is the modus operandi of anti-Trump liberals as they refuse to take “no” as an answer from the Supreme Court. The High Court implicitly but thoroughly rejected the liberal theory that Trump’s temporary travel ban was unconstitutional because he supposedly campaigned with some anti-Muslim rhetoric. 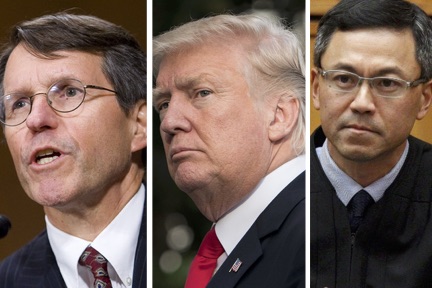 Judges Derrick Watson and William Orrick picked up where they left off before the Supreme Court so rudely intervened. Both federal district judges essentially ignored the Supreme Court’s unanimous ruling that lower courts had gone too far in tying the President’s hands.

Judge Derrick Watson was initially reluctant to re-interpret the Supreme Court ruling, but on July 7th the overwhelmingly liberal Ninth Circuit egged him on with an order of its own. That appellate court declared that “although the district court may not have authority to clarify an order of the Supreme Court, it does possess the ability to interpret and enforce the Supreme Court’s order,” and “interpret” it Derrick certainly did.

Meanwhile, back in San Francisco, Judge William Orrick had issued a temporary injunction in April that blocked President Trump from withholding any federal funding from “sanctuary cities” that harbor and protect illegal aliens, even those who commit horrible crimes. San Francisco’s insistence on being a sanctuary city has resulted in murders increasing 55% and rapes skyrocketing 370% between 2011 and 2015.

A day before Judge Watson ruled against President Trump’s travel ban, Judge Orrick heard oral arguments about the need to lift his preliminary injunction against Trump’s executive order cutting off funding for sanctuary cities. Speaking from his bench, Judge Orrick indicated that he was going to keep his ruling in place, continuing to blocking Trump’s much-needed action.

Attorney General Jeff Sessions explained to law enforcement officials gathered in Las Vegas that “too often” local officials interfere with attempts by federal immigration agents to detain and deport dangerous illegal aliens. President Trump is appealing this recent ruling against his temporary travel ban back to the Supreme Court.

What You Need to Know is Ray Epps was in on it! Who is Ray Epps? Congressman Jamie Raskin gave us the answer after the prompting by Congressman Thomas … END_OF_DOCUMENT_TOKEN_TO_BE_REPLACED

What You Need to Know to Understand is the danger of the Narrative Machine! Read this article from Tablet Magazine to help understand the connection … END_OF_DOCUMENT_TOKEN_TO_BE_REPLACED

The term “sanctuary city” is one of those dishonest terms the Left uses to make their bad policies sound better. Think about the Affordable Care Act. … END_OF_DOCUMENT_TOKEN_TO_BE_REPLACED

Phyllis Schlafly Eagles · #WYNK: Who Is Congressman Troy Nehls? | September 28, 2022 #ProAmericaReport The following is a transcript from the Pro … END_OF_DOCUMENT_TOKEN_TO_BE_REPLACED

What You Need to Know is The Narrative Machine is Obsessed with Trump! First, it used to be called the Trump Exhaustion Syndrome now the left is … END_OF_DOCUMENT_TOKEN_TO_BE_REPLACED

Phyllis Schlafly Eagles · October 5 | Follow the Science on Monkeypox As Americans try to put Covid behind us, another frightening virus has … END_OF_DOCUMENT_TOKEN_TO_BE_REPLACED