Congress is not an easy body to work with. It seems as though it does its best to roadblock President Trump’s pro-America agenda at every possible turn. It takes continual prodding and poking to get even the most common sense measures passed by America’s highest legislative body. Just as President Trump has the power to motivate and admonish Congress to carry out a conservative agenda, so too does Congress have a plethora of powers with which to get things done. Unfortunately, unlike President Trump, Congress becomes too squeamish to use their power whenever called upon to do so for the benefit of the American people. That is why Phyllis Schlafly used her November 2015 Phyllis Schlafly Report to proclaim that “Congress Must Reclaim Article One.” Congressmen still have that same power today, and it is up to conservatives to remind them to use it.

Article One, Section 8, Clause 4 of the Constitution vests in Congress the exclusive right to “establish an uniform Rule of Naturalization.” It takes action by Congress to end chain migration, end visa lotteries, and end so many other destructive immigration policies that hurt the interests of American citizens. However, the problem extends far beyond that. We must understand that every sanctuary city standing in defiance of the immigration laws of the United States is also standing in direct defiance of Article One of the Constitution. We can certainly lay blame on the sanctuary cities for this violation, but we should lay just as much blame on Congress for not asserting its constitutional power and cracking down on these unconstitutional jurisdictions. Do not let Congress pass the buck.

On the critical issue of trade, Congress has thrown away its Article One power to “regulate commerce with foreign nations.” Rather than doing its job by crafting pro-America terms for the massive trade agreement known as the Trans-Pacific Partnership or simply sinking it outright, Congress voted to yield unprecedented authority to the executive to negotiate the specific terms of the agreement. Although they ceded this power to the Obama Administration, thankfully President Trump was chosen by the American people to end that train wreck. However, the fact that we did not end up entering TPP should not distract us from the fact that Congress should have been the ones to end it long before President Trump was elected. We should not let them get away with that. We elected them to represent the interests of the American people.

The paradox of the U.S. Congress is both shocking and thought-provoking. It is not a major revelation to say that nobody really likes Congress. It holds a mere twenty percent approval rating according to the most recent Gallup polls. Yet, the legislators who compose Congress had an incumbency rate in 2016 of ninety-seven percent in the House and ninety-three percent in the Senate. Essentially, that means people dislike Congress as a whole, yet they still believe that their particular legislator is not a part of the problem. That is what gives members of Congress the audacity to ignore those powers vested to them by the Constitution. They pass the buck and convince their constituents that they are the solution, but never take any steps to change things.

For us, that means we need to hold our legislators individually accountable for their decision to exercise Congress’s Article One powers. The words of the Constitution are openly available to all. If we are informed about Congress’s powers, we have all the tools we need to make Congress use the tools they have. In that way, the Phyllis Schlafly Report gives every passionate conservative what they need to make a real change in American government.

To view the November 2015 Phyllis Schlafly Report in its entirety, please click on the image below. 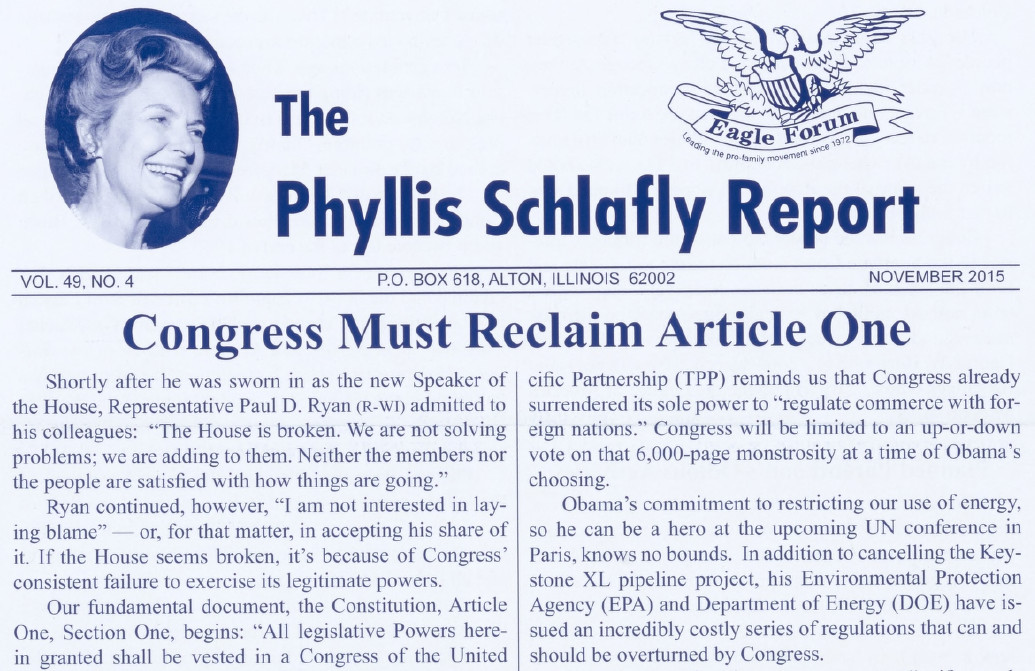 What You Need to Know is Mom first! Life begins at conception. But what if the pro-life movement reframed the battle. What if we advertised that life … END_OF_DOCUMENT_TOKEN_TO_BE_REPLACED

What You Need to Know is a lesson on documents and double standards. Suddenly everyone has classified documents and everyone is spinning the stories … END_OF_DOCUMENT_TOKEN_TO_BE_REPLACED

Phyllis Schlafly Eagles · #WYNK: China's Hooking Us on Fentanyl, TikTok | October 18, 2022 #ProAmericaReport The following is a transcript from the … END_OF_DOCUMENT_TOKEN_TO_BE_REPLACED

The term “sanctuary city” is one of those dishonest terms the Left uses to make their bad policies sound better. Think about the Affordable Care Act. … END_OF_DOCUMENT_TOKEN_TO_BE_REPLACED

For Immediate Release: January 26, 2022Contact: Ryan Hite, Communications Director Solution Staring Us In the Face to Save American Lives: Shut the … END_OF_DOCUMENT_TOKEN_TO_BE_REPLACED