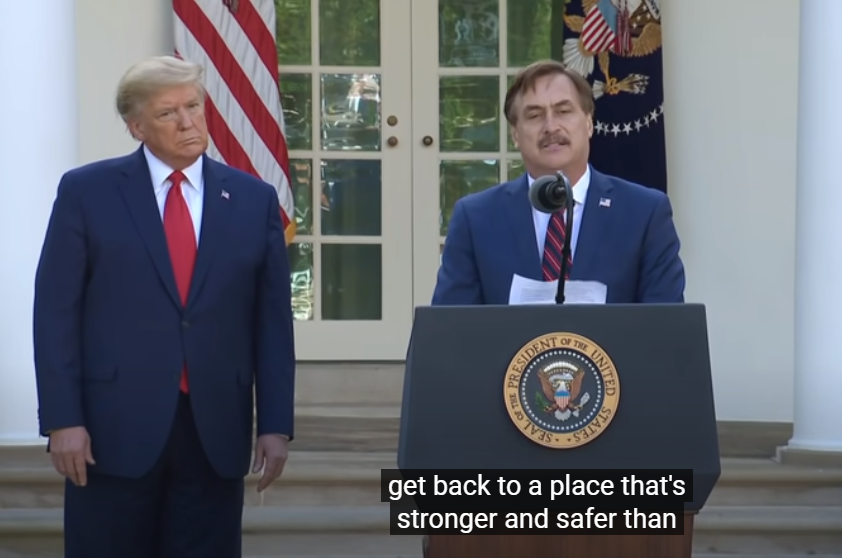 It’s a sad day in America when outspoken Christians are vilified for bending over backwards to help our nation in a crisis. At one of President Trump’s coronavirus briefings, he invited Mike Lindell to say a few words. You might know Mike as the spokesman for his My Pillow company. He built My Pillow from the ground up as an American company manufacturing all their products in America. When COVID-19 hit, he took it upon himself to shift 75 percent of his company’s production to make masks for healthcare workers. President Trump called Mike up to the podium to talk about this work in the hopes that other companies would hop on board with this patriotic act of sacrifice.

However, Mike Lindell didn’t limit his comments to masks. He told the American people “I encourage you to use this time at home to get back into the Word, to read our Bibles, and spend time with our families. With our great president, vice president, and this administration and all the great people in this country praying daily, we will get through this and get back to a place that’s stronger and safer than ever.”

Mike Lindell’s selfless actions and words of encouragement should have been applauded by everyone, no matter your political leanings. Instead, having the audacity to ask for prayer triggered the constantly offended snowflakes on the Left. They took to Twitter to mock him mercilessly. Morning Joe cohost Mika Brzezinski said “Is that the my pillow guy?? Do I need to turn the volume up. I was waiting for the doctors.” Tom Nichols sarcastically chimed in “Imagine my relief that the My Pillow guy is on the job.”

What these media nitwits don’t seem to remember is that Mike Lindell wasn’t up there because President Trump just loves his amazing pillows. He was there because he went above and beyond the call of duty to help his nation in a time of need. His patriotism and Christian charity led him to sacrifice so that thousands of Americans might have a chance to live. If that is triggering to you, how can you call yourself an American?

Phyllis Schlafly Eagles · #WYNK: Documents and Double Standards | January 24, 2023 #ProAmericaReport The following is a transcript from the Pro … END_OF_DOCUMENT_TOKEN_TO_BE_REPLACED

What You Need to Know is a lesson on documents and double standards. Suddenly everyone has classified documents and everyone is spinning the stories … END_OF_DOCUMENT_TOKEN_TO_BE_REPLACED

What You Need to Know is that about political hit jobs against lawyers. Conservative lawyers who stand up for truth and transparency are being … END_OF_DOCUMENT_TOKEN_TO_BE_REPLACED

Proving once again that he is in touch with ordinary Americans, Donald Trump selected education for the first video message of his 2024 presidential … END_OF_DOCUMENT_TOKEN_TO_BE_REPLACED

Phyllis Schlafly Eagles · #WYNK: Trump's Record is Baked In | January 30, 2023 #ProAmericaReport The following is a transcript from the Pro … END_OF_DOCUMENT_TOKEN_TO_BE_REPLACED

What You Need to Know is Trump’s record is baked in. He’s already been torn apart every which way and his record stands with all the things you like … END_OF_DOCUMENT_TOKEN_TO_BE_REPLACED

What You Need to Know is Ours is a Religious Nation. Phyllis Schlafly reminded us of this plain fact in her column on Christmas Eve 1982. Our founders … END_OF_DOCUMENT_TOKEN_TO_BE_REPLACED