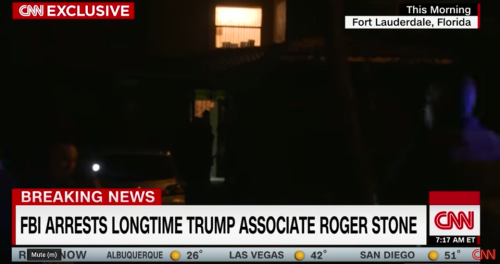 On Friday, January 24th, the country saw news that Roger Stone, long-time Republican strategist and campaign consultant to Donald Trump had been indicted and arrested by Special Counsel Robert Mueller’s witch hunt, but Trump says Roger Stone didn’t work for him ‘anywhere near election’. This is the latest in a long string of political “hits” against top Trump campaign officials. What was different today, however, is that video from Stone’s arrest looked more like the capture of a drug lord or known terrorist. In a ludicrous move, Stone’s home was swarmed by dozens of FBI agents and vehicles in full SWAT gear.

According to news reports, the FBI descended on Roger Stone’s house in Ft. Lauderdale with 27-armed SWAT members and 7 vehicles including two armored personnel carriers. Wow! That’s comparable to the raid on Bin Laden’s compound in Abbottabad, which  involved two helicopters and less than a two dozen men. The 6:00 am raid in Florida had one thing lacking in Pakistan – a 3-member news team from CNN. which filmed the entire event. It was on the news even as Stone was even led away from his home in chains!

Not only should The Department of Justice and the FBI be ashamed not only with what took place, but especially for colluding with CNN to allow cameras on a ride along.  Fake news media helped Mueller create a spectacle with all flash and — as we now know — absolutely no substance.  Acting Attorney General Whitaker and FBI Director Wray ought to be ashamed. They should either resign for allowing CNN to manufacture such sensational ‘reporting’ or do their job and stop the Mueller witch hunt.

On the same day of the raid, President Trump expressed extreme displeasure with the FBI’s dramatic arrest of Roger Stone.  After watching the CNN footage of the early morning FBI raid, Trump blasted the Justice Department’s over-the-top treatment of Stone through twitter:

“Greatest Witch Hunt in the History of our Country! NO COLLUSION! Border Coyotes, Drug Dealers and Human Traffickers are treated better. Who alerted CNN to be there?” Trump tweeted.

Famed attorney Alan Dershowitz likewise blasted Robert Mueller on January 25th over Stone’s indictment on an appearance on Fox News’ “America’s Newsroom.  Dershowitz essentially accused Mueller of creating crimes where none exist.  “This is typical of Mueller. He has found almost no crimes that occurred before he was appointed special counsel.”

Why all the theatrics? One can speculate that the lack of any evidence supporting “Russian Collusion” demanded proof that the Mueller team was doing  something. Notably, nothing in Stone’s indictment mentions “collusion,” rather that Stone lied in his testimony to Congress. “Lying” from Mueller’s point of view stems from any conflict between Stone’s testimony and that of another witness or any of the other witnesses.  Five have plead guilty to various charges and are likely desperate to save themselves long jail sentences.  Stone’s indictment also fails to mention the fact that Stone’s communications regarding the Wikileaks exposure of DNC emails were dated after those leaks became public knowledge.

The dramatic raids on Stone, Manafort and Cohen may serve another purpose — a warning to anyone who supported President Trump in his election campaign, or who might help in 2020, might have a target on their back. If Mueller’s intent is to intimidate witnesses, he seems to be doing a good job of it, along with rallying those too willing to believe anything negative about the President.

It can be speculated that the early morning raid on Stone’s house was to scare the living daylights out Americans. They woke up Stone and his wife using 9 government vehicles and a swat team with guns, because they knew they could get away with it.  It could also be done to you if expressing loyalty to Trump, but certainly not to those on the other side.

When will justice be dealt to those who were responsible for the raid and who think they are the 4th branch of government operating outside of the law, when Stone’s indictments were just process crimes for lying to Justice.

We are witnessing the complete upending and the weaponizing of our Justice Department. Steps must be taken for criminal justice reform.  As of now, prosecutors receive immunity of the sovereign, while police officers only receive qualified immunity.

It would take legislation to change this this travesty. Prosecutors should be named and shamed.  How often does it happen (as with Flynn) that individuals are forced to make a guilty plea because there is no alternative way out. Yet prosecutors (such as those in the Mueller investigation) are permitted to destroy the lives of those being investigated by using tactic initiated to squeeze the defendant into telling them what they wish to hear.  In Roger Stone’s case, as with others, Stone is being pressured to rat on Trump

Roger Stone vowed Friday afternoon (January 15th, 2018) after his indictment to fight the charges brought by special counsel Robert Mueller.  Stone said he would refuse to testify against President Donald Trump as set forth in the following statement:

“I will plead not guilty to these charges. I will defeat them in court,” the longtime Trump ally and Republican political operative told reporters gathered outside a federal courthouse in Florida after his arrest early Friday morning. “I believe this is a politically motivated investigation.”

“There is no circumstance whatsoever under which I will bear false witness against the President, nor will I make up lies to ease the pressure on myself,” he said, sometimes being drowned out by cheers from supporters and chants of “lock him up” from protesters outside the courthouse. “I look forward to being fully and completely vindicated.”

Phyllis Schlafly Eagles · #WYNK: Pro-Life Movement Has to Adjust | January 19, 2023 #ProAmericaReport The following is a transcript from the Pro … END_OF_DOCUMENT_TOKEN_TO_BE_REPLACED

Phyllis Schlafly Eagles · #WYNK: Political Hit Jobs Against Lawyers | January 18, 2022 #ProAmericaReport The following is a transcript from the Pro … END_OF_DOCUMENT_TOKEN_TO_BE_REPLACED

What You Need to Know is Trump is stronger than Biden. Our American leaders sending tanks and weapons to escalate the war in Ukraine aren’t in line … END_OF_DOCUMENT_TOKEN_TO_BE_REPLACED

Phyllis Schlafly Eagles · #WYNK: Trump is Stronger Than Biden | January 27, 2023 #ProAmericaReport The following is a transcript from the Pro … END_OF_DOCUMENT_TOKEN_TO_BE_REPLACED