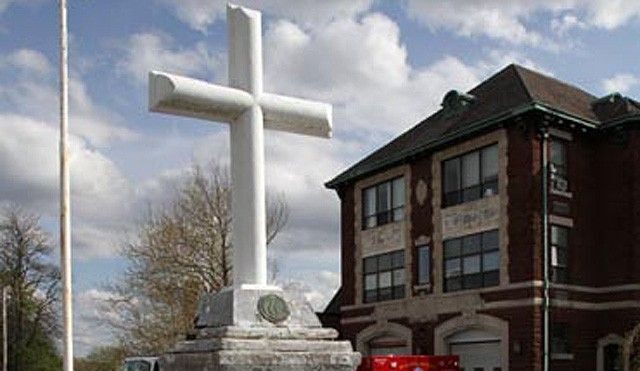 Today I’m going to remind you that no cross is too small to escape being targeted for removal by the atheists. In Woonsocket, Rhode Island, a little town you probably never heard of, a cross has been standing in the parking lot of the local fire station for 97 years. Mayor Leo Fontaine said, “The monument’s been sitting there for 97 years and no one had a problem with it. And now someone from Madison, Wisconsin is so concerned?” The cross was erected in memory of a guy killed in World War I and later rededicated in memory of three brothers killed in World War II.

An atheist group from far away Madison, Wisconsin sent a formal demand to the city, asking that it “immediately remove the cross from the fire station parking lot and [also] remove the prayer and [the picture of] an angel from the Woonsocket Fire Department website.” The atheists may have selected this obscure target because this small city has little money and cannot afford a legal battle. This anti-religion busybody group, called the Freedom from Religion Foundation, is now pursuing legal action in eleven other states.

I’m going to read you the lovely prayer that the atheists are demanding be removed from the Fire Station’s website. After I read it, ask yourself, are we going to put up with a handful of atheists banning this beautiful prayer from public life?

“When I am called to duty, God, wherever flame may rage, Give me strength to save some life, whatever be its age. Enable me to be alert and hear the weakest shout, And quickly and efficiently, put the fire out.

I want to fill my calling, and to give the best in me. To guard my every neighbor, and protect his property. And if according to my fate, I am to lose my life, Please Bless with your protecting hand, my children and my wife.”

What You Need to Know is Ours is a Religious Nation. Phyllis Schlafly reminded us of this plain fact in her column on Christmas Eve 1982. Our founders … END_OF_DOCUMENT_TOKEN_TO_BE_REPLACED

What You Need to Know is government accountability is lacking and it’s getting worse. No one knows who’s written this massive spending omnibus bill … END_OF_DOCUMENT_TOKEN_TO_BE_REPLACED

What You Need to Know is Mom first! Life begins at conception. But what if the pro-life movement reframed the battle. What if we advertised that life … END_OF_DOCUMENT_TOKEN_TO_BE_REPLACED