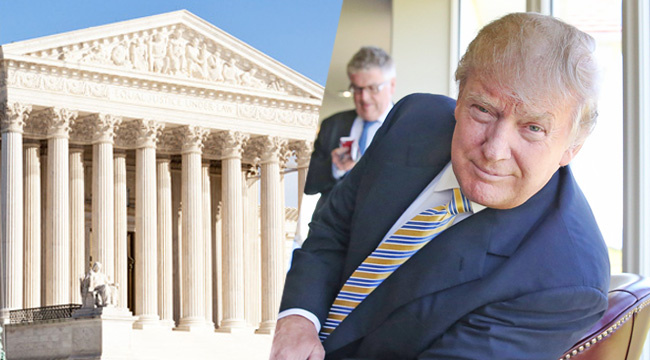 “Very grateful for the 9-0 decision from the U.S. Supreme Court. We must keep America SAFE!” Trump tweeted in celebration of the biggest victory by a president in the Supreme Court in a generation.

Every Supreme Court Justice, liberal or conservative, Democrat or Republican, voted to uphold the essence of President Trump’s executive order keeping dangerous foreigners from entering our country. Not one Justice endorsed the allegation that Trump somehow violated the First Amendment by discriminating against Muslim visitors from Syria, Somalia, and other dangerous countries.

This is a stunning reversal of fortune for the Left not seen since Election night. The American Civil Liberties Union, which had publicly threatened President Trump to “see you in court,” saw its dreams of judicial activism go up in smoke as the activist rulings by lower federal courts were effectively nullified.

All nine Justices on the High Court joined a “per curiam” opinion striking down the essence of the rulings against Trump by the Fourth and Ninth Circuits. Trump’s prediction that he would win before the Supreme Court came true, just as many of his other predictions have been fulfilled despite media insistence otherwise.

“The interest in preserving national security is an urgent objective of the highest order.” So declared the Court, using tweet-like wording that President Trump himself might have sent out over Twitter to his 32 million-strong audience.

Shortly after Trump became president he issued Executive Order No. 13780, entitled “Protecting the Nation From Foreign Terrorist Entry Into the United States,” but judicial activism has prevented it from ever going into effect. This long-awaited ruling by the High Court on Monday was a welcome comeuppance to the activist judges who had blocked the so-called “travel ban” against immigration by potential terrorists.

The Supreme Court ruling never used the phrase “travel ban,” because Trump merely suspended for 90 days the entry of foreigners from six countries associated with terrorism. As Trump explained while campaigning, a suspension makes sense “until our country’s representatives can figure out what is going on” with the radical Muslims who commit terrorist attacks against innocent citizens.

By ruling for Trump, the Court may have really been averting a constitutional crisis for itself. President Trump reminds many of President Andrew Jackson, who reportedly responded to a ruling against him on an Indian issue by saying that the Chief Justice “has made his decision, now let him enforce it!”

The Constitution does not give the federal judiciary the power to enforce any of its rulings. Instead, federal courts depend entirely on the good will of the Executive Branch, which is under the control of President Trump, to implement court decisions.

This inherent check-and-balance on overreaching by federal courts may help explain why the Supreme Court reversed the lower courts and gave Trump a much-deserved win. Even liberal justices on the Supreme Court agreed to issue a ruling for President Trump, which he is willing to enforce.

This unanimous Court decision authorizes President Trump to suspend travel from the six countries associated with terrorism by any “foreign nationals who lack any bona fide relationship with a person or entity in the United States.”

The “bona fide relationship” must be significant, the Court explained. “For individuals, a close familial relationship is required,” the Court emphasized.

“A foreign national who wishes to enter the United States to live with or visit a family member,” like someone’s wife or mother-in-law, would qualify. But weaker connections should not.

Three of the Supreme Court Justices wrote separately to say that Trump should have been given even more leeway to exclude dangerous aliens. This group included recently-confirmed Justice Neil Gorsuch, who joined a strong opinion written by Justice Clarence Thomas in favor of Trump.

Headlines failed to give Trump credit for his landslide victory, and instead spoke in terms of the Supreme Court scheduling these cases for fuller consideration during its next term, which begins in October. But the Court ruling requires that the essence of the Executive Order by Trump go into effect almost immediately.

The very same day that the Supreme Court ruled in favor of Trump, a district court in San Antonio considered a challenge to a good new law in Texas banning sanctuary cities. In refreshing contrast with the Obama Administration, Trump Attorney General Jeff Sessions has Justice Department attorneys in that case to support the State of Texas and its stance against sanctuary cities.

Opponents of laws against immigration often cite a phony discrimination argument, as though keeping terrorists and illegal aliens out of our country would somehow constitute improper discrimination. The Supreme Court decision in favor of Trump notably omitted giving any credence to the anti-Trump psychobabble about Trump’s supposed “animus” towards Muslims.

Phyllis Schlafly Eagles · February 3 | "Woman" Is the Word of the Year The internet is a powerful tool that most of us use every day. … END_OF_DOCUMENT_TOKEN_TO_BE_REPLACED

What You Need to Know is Tucker is allowing the will of the people to be heard! When a huge block of Republicans and so-called conservatives are … END_OF_DOCUMENT_TOKEN_TO_BE_REPLACED