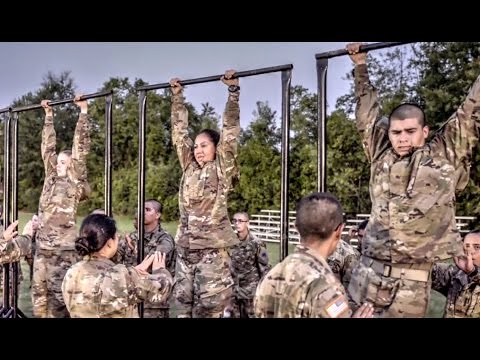 Unexpected events reveal uncomfortable truths about human nature, as demonstrated by two nearly simultaneous events on opposite sides of the world last Friday. In Fort Benning, Georgia, a large press contingent turned out to applaud and photograph the first two women ever to complete Ranger School, the Army’s toughest training course, which even most men are unable to finish.

That same afternoon in Belgium, aboard a high-speed train traveling from Amsterdam to Paris at 186 miles per hour, three young Americans on vacation together vividly demonstrated why combat is no place for women. The three young men, who included a National Guard soldier recently returned from Afghanistan and an active duty airman on leave, rushed and tackled a heavily armed terrorist who was about to commit mayhem on their fellow passengers.

Witnesses said a Moroccan man ducked into the bathroom where he retrieved a Kalashnikov AK-47 machine gun, Luger pistol and knife from his backpack, then assumed a position, apparently intending to massacre everyone on the train. In the split second when the terrorist’s gun clicked without firing, 22-year-old Alek Skarlatos said “Let’s go; get him” and his buddy, 23-year-old Airman Spencer Stone, barreled down the aisle towards the terrorist with Alek and their friend Anthony Sadler right behind.

The three Americans managed to disarm, disable and hogtie the terrorist before he could carry out his planned jihad, though not before Spencer Stone was severely wounded by the terrorist’s box cutter as other passengers crouched behind their seats and the train’s crew locked themselves inside the engine room. The Americans were unarmed, of course, because European trains are a gun-free zone.

The young Americans had become fast friends at Freedom Christian School in Carmichael, California, and their friendship deepened while one attended college and the others were deployed separately. Spencer Stone, the most powerful athlete of the three, was first to advance to the gunman and received the most serious injuries, while his friends helped subdue the enemy.

For all of recorded human history, combat has been a profession for young men who bond together in small groups – a phenomenon known as unit cohesion. There is no nation, anywhere in the world, that has successfully introduced women into combat units, which this incident proves are still needed, even in the era of push-button drone warfare.

With all due respect to the two (out of 19) women who proved their mettle by surviving Ranger School, no one ever doubted that women can serve with honor and distinction in our armed services. That does not make them suitable for combat.

There’s a reason why no woman has ever won our nation’s highest award for valor. The Medal of Honor recognizes a willingness to charge toward danger, to seek out and remove a threat, while everyone else is running away.

On September 11, 2001, as thousands of office workers (male and female) rushed down the steps of the burning World Trade Center, 343 brave firefighters marched up the stairs in search of victims to rescue. All 343 fireMEN perished when the Twin Towers collapsed.

On that same day aboard United flight 93 from Newark to San Francisco, as 33 unsuspecting passengers realized that four Muslim men had hijacked the plane for a suicide mission, four passengers, all men in their 30s, formed an impromptu combat team. On the signal “Let’s roll,” they fought the hijackers to take control of the plane and thereby prevented its intended suicide mission.

The unscientific belief in the interchangeability of the sexes is why the New York Fire Department recently accepted a female applicant who failed six times to finish the Functional Skills Test within the allotted time. In Chicago, which is still scarred by the Great Fire of 1871, the Fire Department agreed to reconsider or pay damages to 187 female applicants who failed the physical ability test.

The Obama administration, which last month announced plans to shrink the Army by 40,000 soldiers, remains determined to admit women to Special Forces (including the Army Rangers and Navy SEALs) before he leaves office. Putting “diversity metrics” ahead of military necessity, Joint Chiefs Chairman Martin Dempsey said in 2013, “if a particular standard is so high that a woman couldn’t make it, the burden is on the service to explain: Why does it really have to be that high?”

Now that Hillary Clinton is less likely to become the first woman president, the New York Times just launched a campaign for the first woman secretary general of the United Nations, quoting the Colombian ambassador: “Gender equality is one of the world’s most serious challenges, an unfulfilled goal that remains critical to advance towards an inclusive and sustainable future.”

The world can probably survive a woman as UN secretary general, but not the emasculation of America’s elite combat units. Don’t let them get away with it.

What You Need to Know is balloons in our hemisphere. As the Chinese weather balloon (read: spy balloon) passes over America, it’s a great time to … END_OF_DOCUMENT_TOKEN_TO_BE_REPLACED

Phyllis Schlafly Eagles · #WYNK: Trump is Stronger Than Biden | January 27, 2023 #ProAmericaReport The following is a transcript from the Pro … END_OF_DOCUMENT_TOKEN_TO_BE_REPLACED