“Very grateful for the 9-0 decision from the U.S. Supreme Court. We must keep America SAFE!” Trump tweeted in celebration of the biggest victory by a president in the Supreme Court in a generation. 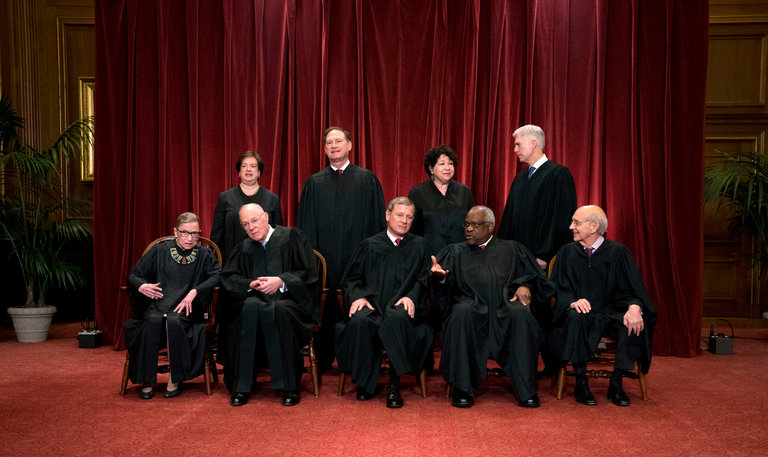 Every Supreme Court Justice, liberal or conservative, Democrat or Republican, voted to uphold the essence of President Trump’s executive order keeping dangerous foreigners from entering our country. Not one Justice endorsed the allegation that Trump somehow violated the First Amendment by discriminating against Muslim visitors from Syria, Somalia, and other dangerous countries.

This is a stunning reversal of fortune for the Left, close on the heels of the 2016 elections. The American Civil Liberties Union, which had publicly threatened President Trump to “see you in court,” saw its dreams of judicial activism go up in smoke as the activist rulings of lower federal courts were effectively nullified.

All nine Justices on the High Court joined the unanimous opinion striking down the essence of the rulings against Trump by the Fourth and Ninth Circuits. Trump’s prediction that he would win before the Supreme Court came true, just as many of his other predictions have been fulfilled despite media insistence otherwise.

“The interest in preserving national security is an urgent objective of the highest order.” So declared the Court, using wording that President Trump himself might have tweeted.

Headlines failed to give Trump credit for his landslide victory, and instead spoke in terms of the Supreme Court scheduling these cases for fuller consideration during its next term, which begins in October. But the Court ruling requires that the essence of the Executive Order by Trump go into effect almost immediately.

The same day that the Supreme Court ruled in favor of Trump, a district court in San Antonio considered a challenge to a good new law in Texas banning sanctuary cities. In refreshing contrast with the Obama Administration, Trump Attorney General Jeff Sessions has Justice Department attorneys in that case to support the State of Texas and its stance against sanctuary cities.

What You Need to Know to Understand is the danger of the Narrative Machine! Read this article from Tablet Magazine to help understand the connection … END_OF_DOCUMENT_TOKEN_TO_BE_REPLACED

What You Need to Know is Martha’s Vineyard CNN coverage is funny! 'They enriched us.' Migrants' 44-hour visit leaves indelible mark on Martha's … END_OF_DOCUMENT_TOKEN_TO_BE_REPLACED

What You Need to Know is The Narrative Machine is Obsessed with Trump! First, it used to be called the Trump Exhaustion Syndrome now the left is … END_OF_DOCUMENT_TOKEN_TO_BE_REPLACED

Phyllis Schlafly Eagles · September 20 | LIV Golf Delivers a Hole in One LIV Golf has appeared as the foremost competitor to the PGA, which has led … END_OF_DOCUMENT_TOKEN_TO_BE_REPLACED

Phyllis Schlafly Eagles · September 27 | Do Politicians Care About Teachers? Promises are easy to make and hard to keep, especially in politics. If … END_OF_DOCUMENT_TOKEN_TO_BE_REPLACED