Phyllis Schlafly knew that Americans care about the threat of globalism. In fact, she would know this fact better than anyone else because she first brought globalism to the attention of the modern conservative movement with her landmark 1964 book A Choice Not An Echo. In it, she exposed that globalists of both parties conspired to ensure that only globalists stood a chance of success in the American political system. Rather than simply claim that there was some distant group doing misdeeds in a distant way, Phyllis brought the fight home by telling conservatives around the nation that their own personal efforts to make America great were being thwarted. The purpose of the August 2016 Phyllis Schlafly Report, the last issue Phyllis ever personally authored, was to say Donald Trump fights the globalists just as she did.

When the August 2016 Phyllis Schlafly Report was written, Donald Trump was already the presumptive nominee of the Republican Party. Despite all of the best efforts of the globalists with all their secret meetings and backroom deals, the voice of the true Republican Party rang through with clarity. Yet, the battle for the presidency was far from over for Trump. Rather than have the unequivocal support of his party as previous Republican nominees had enjoyed, Trump had to fight against the establishment of his own party on one hand and the establishment of the other party on the other hand, while simultaneously fighting off the media, Hollywood, and the FBI. Clearly, the only way Trump could have won in the face of such terrible odds is by speaking about the things America cares about and genuinely connecting with them.

Globalism is one of those things that Americans care about. He received enthusiastic support when he said on April 27, 2016 that “We will no longer surrender this country or its people to the false song of globalism.” That is exactly what Republican and Democrat donors did not want to hear. After all, they were the ones singing that song the loudest. The famous Brexit vote in the UK served as a poignant premonition of the America First phenomenon happening in the United States. With that same ferocious passion for national sovereignty, Donald Trump seized victory in the 2016 presidential election over the very face of globalism: Hillary Rodham Clinton.

With hindsight unknown to Phyllis at the time that she wrote the August 2016 Phyllis Schlafly Report, we can see that she was right to say that President Trump would follow through on his promise to fight the globalists from the Oval Office. One of his very first actions as president was to pull the United States out of the terrible trade deal known as TPP. Globalist billionaire donors would have liked nothing more than to weaken America by being able to ship jobs overseas without paying any significant penalties. However, Trump did not follow the interests of the billionaires. He has worked hard to secure bilateral trade deals which protect American interests. However, he has not simply made it more difficult for corporations to ship jobs overseas. He has also fostered a business climate in our own nation which makes corporations want to stay here. They know business is booming in America again and they want to be a part of it.

When it comes down to it, anyone can see that Phyllis Schlafly was right on globalism in 2016, just as she was right about globalism in her very first Phyllis Schlafly Report in 1967. Americans want to know that their interests come first. They do not want to play second fiddle to corporations, other nations, immigration, or anyone else. We want our nation’s elected officials to look out for us. Phyllis sparked that energy in 1964 and she fanned the flames until her death in 2016. In many ways, the Phyllis Schlafly Report is what she used to fan the flames with. That burning passion elected Donald Trump to the presidency.

To view the August 2016 Phyllis Schlafly Report in its entirety, please click on the image below. 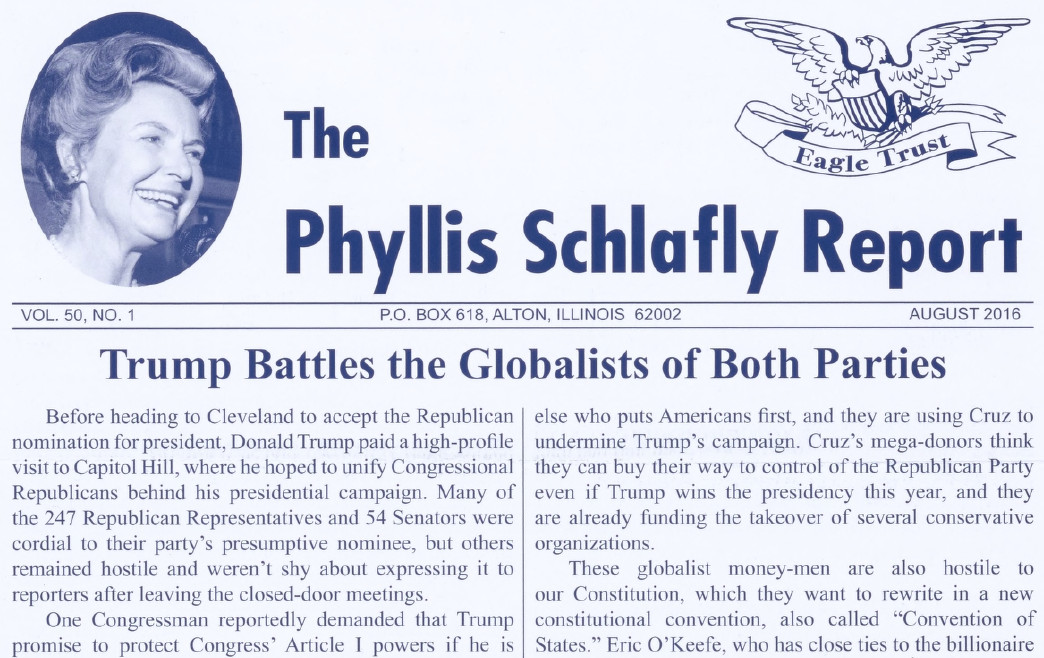 The Deep State in Washington, D.C. just offered to debrief Trump Administration officials about the hot air balloons that have invaded our airspace … END_OF_DOCUMENT_TOKEN_TO_BE_REPLACED

What You Need to Know is Tucker is allowing the will of the people to be heard! When a huge block of Republicans and so-called conservatives are … END_OF_DOCUMENT_TOKEN_TO_BE_REPLACED

Proving once again that he is in touch with ordinary Americans, Donald Trump selected education for the first video message of his 2024 presidential … END_OF_DOCUMENT_TOKEN_TO_BE_REPLACED

Phyllis Schlafly Eagles · #WYNK: Trump's Record is Baked In | January 30, 2023 #ProAmericaReport The following is a transcript from the Pro … END_OF_DOCUMENT_TOKEN_TO_BE_REPLACED