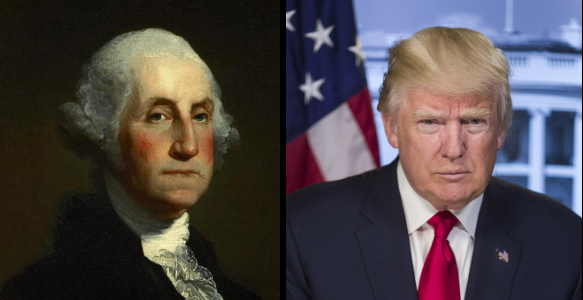 In a few minutes, our new George Washington will welcome French President Emmanuel Macron to Mount Vernon.  Like Washington, Donald J. Trump is a “master military strategist” who seeks peace through strength.

It was George Washington who offered us “the most succinct two-part formula for peace:” 1) be ready for war; and 2) let the world know we are willing to go to war.

That first part means embracing overwhelming superiority of our military forces such that we could meet any threat to American interests by any foreign aggressor. If a nation is not prepared to protect its own interests, it will never be safe from direct or indirect oppression from others.

The second part of the formula is to let the world know if provoked, we will fight and win. Even the strongest military in the world is useless if foreign powers believe we are unwilling to use it. (see, e.g. Obama’s Red Line in Syria).  As Washington put it, “there is a rank due to the United States among nations, which will be withheld, if not absolutely lost, by the reputation of weakness.”

Who but President Trump has done more to display this legacy of military superiority to the nations of the world? He truly is the George Washington of our time.

Likewise, military superiority makes our enemies fear us more. Who but today’s George Washington could have brought “Rocket Man” to the bargaining table? Make no mistake: when next month’s talks with North Korea yield success, it will be because Donald Trump followed the example of George Washington as laid out in the May 2002 Phyllis Schlafly Report.

The formula for peace is to have a big military and to make it known that we will use it. As for today’s visit with France’s Macron, we wish the President all the best, bon chancé, and we can’t wait for the big military parade next Fall!

What You Need to Know is what’s wrong with the Deep State! I don’t think we’ve seen anything like what could happen when people like Andrew Weissmann … END_OF_DOCUMENT_TOKEN_TO_BE_REPLACED

Fifty-one years ago today, the Apollo 11 lunar mission achieved liftoff from the Kennedy Space Center in Cape Canaveral, Florida. That was certainly a … END_OF_DOCUMENT_TOKEN_TO_BE_REPLACED

* Previously Recorded by Phyllis Schlafly // June 2010 * In a world of growing threats to freedom and our U.S. Constitution, America's very … END_OF_DOCUMENT_TOKEN_TO_BE_REPLACED

What You Need To Know is today is Constitution Day! President Trump gave an extraordinary 20 minute speech talking about the history of the country, … END_OF_DOCUMENT_TOKEN_TO_BE_REPLACED

Even before the death of Ruth Bader Ginsburg created an opening for President Trump to place a third Justice on the nine-member Supreme Court, … END_OF_DOCUMENT_TOKEN_TO_BE_REPLACED