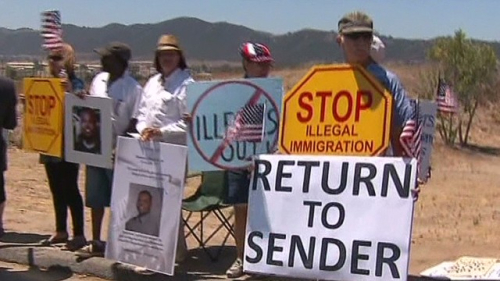 It is foolish, if not actually dangerous, to believe the United States can continue to disregard our well-established immigration laws and expect that it will not have a detrimental impact on our citizens and nation.

History provides evidence that once-prosperous countries have failed due to not initiating appropriate action when there was a need and the opportunity to do so.   A good example from the past is the Roman Empire that ruled for 500 years before it deteriorated.

Most scholars believe the cause was largely due to decay from within that included wasteful spending, poor leadership, and blatant immorality, largely by those in positions of power.

Examples of failures throughout history should be a warning that no nation is so powerful that it can afford to ignore warning signs of potential problems from within.  It is imperative that America’s leaders make positive corrections before known problem becomes irreversible.  The current crisis in Venezuela is a textbook case of how even countries with significant financial assets like massive oil fields can fail when its leaders are inept or corrupt.

A glaring potential problem American leaders and citizens must address is the way our established immigration laws are being violated. While we feel compassionate for people who are trapped in dangerous places throughout the world, we must apply extreme caution and discretion for the sake of our own citizens.  Allowing massive groups of people into our country, with little or no vetting process, violates our immigration laws and endangers American citizens.  It not only taxes our welfare programs, but of more concern is that it strains the necessary vetting process, potentially allowing undesirable immigrants to slip through, among them vicious gang members, drug dealers, and sex traffickers.  It does not take experts to recognize the great harm this represents to American citizens, particularly to our younger population, as it is the duty of adults to make decisions favorable for their own children and for future generations

Most mainstream media sources fail in publishing accurate facts about the immigration crisis.  That failure has never been more evident than it was during Donald Trump’s presidential campaign, and it continues now that Trump is president.  Trump has accordingly labeled inaccurate media reports as “fake news, as was demonstrated when CNN’s Jim Acosta challenged Trump’s declaration of a national emergency on this nation’s southern border during his Rose Garden announcement.  Acosta spoke of Trump’s declaration as a “disconnect from reality”:

“You are presenting information about what’s happening at the border, calling it an invasion, talking about women with duct tape over their mouths and so on, and yet there is a lot of reporting out there, a lot of crime data out there … that shows border crossings at a near record low.”

Even if mainstream media sources find it necessary to correct inaccurate and/or false information, many readers do not always see the correction, because it’s not front-page news.

Media’s purpose for slanting the news

Often there are political concerns, such as favoring or disliking a particular party in power at the time.  As such, the owner of news sources, consider the Washington Post, or the editors’ political views on issues often govern the style of reporting.

There is a tendency for reporters to promote their own political ideology, rather than report issues fairly so the public can decide.  Media coverage on illegal immigration range from those explaining the need for and then congratulating those who work to keep our nation safe through strict screening, to other media sources who, because of their liberal bias, report as many faults as possible to reinforce their intense dislike for borders and immigration procedures, sometimes to the point of exaggeration.

Money likewise is often at play.  The media prints whatever is most likely to keep their subscribers interested and entice new ones, with an emphasis being on their profit line rather than what is over-all best for our nation. Often that means being the first to print the top story of the day and/or provide the more sensational viewpoint.  The media took the Native American “elder” Nathan Phillips’s lies (see here and here) about the Covington Catholic boys seriously, only confirming their biases about white males who wear MAGA hats. In Jussie Smollett’s case, the claim that two people in Chicago would have attacked this guy at 2 a.m. on a subzero night with a rope, yelling “This is MAGA country!” ought to have set off media’s b.s. detectors!

Business interests, as with the media, likewise profit through the continued flow of new illegal immigrants who provide cheap labor and a new supply of customers and consumers for products.  But there exists a truism that seldom reaches the public’s attention.

Most new immigrants lack adequate finances.  This results in the need for public assistance, which, in turn, increases the need for more taxation for all citizen.  63% of non-citizen households access welfare programs.  How can this be when the public is repeated told that legal immigrants don’t quality for welfare benefits?  While most new legal immigrants (green card holders) are barred from most welfare programs, as are illegal immigrants and temporary visitors, these provisions have only a modest impact on non-citizen household use rates because: 1) most legal immigrants have been in the country long enough to qualify; 2) the bar does not apply to all programs, nor does it always apply to non-citizen children; 3) some states provide welfare to new immigrants on their own; and, most importantly, 4) non-citizens (including illegal immigrants) can receive benefits on behalf of their U.S.-born children who are awarded U.S. citizenship and full welfare eligibility at birth.

Pregnant women from foreign countries, especially Mexico and China, purposely enter America so their child can be born in America to receive all the rights of American citizenship.  Even if sneaking across the southern border, pregnant Mexican women know they will receive free hospital care, as it’s illegal not to provide emergency medical care and the bonus of automatic citizenship for their child.

In addition to pocketbook expenses, unprecedented illegal immigration has negatively impacted our citizens in other ways.  Of concern is not that an alarmingly large number of new immigrants have chosen not to assimilate but instead follow their former customs, traditions, dress, or speech.  It is not that they largely gather in specific states and have formed and now run their own communities within our country.  No, while these are obviously problems, the real catastrophe is the number of crimes they commit and inflict on our citizens.

America’s jails and prison population have a disproportionate percent of prisoners who are in the United States illegally.  In fact, 30% of Federal prisoners are illegal immigrants, who have summarily committed additional crimes while in the United States costing taxpayers $134 million for just a three months prison incarceration. That cost does not include additional costs, such as those associated with those accumulated using our Court system, police officers, and lawyers who defend them.

The latest information about the cost of incarcerating all illegal immigrants was in a period from 2011 through 2016 as reported by the Government Accountability Office (GAO).  For starters, 91 percent of federal criminal aliens were citizens of Mexico, Honduras, El Salvador, Dominican Republic, Colombia or Guatemala. In terms of cost, federal taxpayers shelled out more than $15 billion during the period studied — or $2.5 billion a year — to keep criminal aliens behind bars in federal, state and local facilities.

There is a growing need to evaluate this nation’s immigration system, especially the policy where foreign prisoners are released back into our country.  What is exceptionally difficult to understand is how a person still is not deported after being found guilty of crime.  Mandatory deportation should be an automatic requirement of law enforcement for those who commit additional crimes in the United States.

Our wise forefathers understood our government’s first priority must always be the well-being of our citizens.  They made sure our immigration laws were enforced to assure our safety.  While media sources, the U.S. Chamber of Commerce, and specific elected officials try to convince us that illegal immigrants are a net plus to this nation, new laws and protections blatantly favoring illegal immigrants tell another story.

Our amazing forefathers also understood the necessity of strong borders from an historical prospective.  A nation must have strong borders to protect its citizens from unchecked immigration, laws that limit the number of foreigners who enter, and a system that assures foreigners leave when their visas expire.  It is understandable why many people throughout the world desire to live in America for the hope of a better life.  Take, for example the analogy of a lifeboat to that of a nation.  A lifeboat has established rules as to the number who can safely occupy it. Ignore those rules and the boat is in danger of sinking.  Imagine how the crew of the Titanic must have felt when they had to adhere to capacity rules after their limited life boats were filled to capacity, knowing those left on the ship were then doomed to a watery death.  The alternative: if lifeboats sunk due to an excess number, everyone drowned .

Our laws must be based on what is best for citizens and nation, not that of the world’s population.  It is time for all Americans to expect, if not demand, that our leaders strictly adhere to laws that dictate immigration quotas.  Officials must do their job, which is protecting our borders and deporting anyone here illegally; most definitely those here illegally who commit another crime while on our soil.

What You Need to Know is thank Trump for the end of Roe v. Wade. As great as the March for Life was last week and excited as my family was to … END_OF_DOCUMENT_TOKEN_TO_BE_REPLACED

What You Need to Know is Joe Biden’s ego will be his undoing. He should drop executive privilege and get this classified documents investigation over … END_OF_DOCUMENT_TOKEN_TO_BE_REPLACED

Phyllis Schlafly Eagles · December 9 | Are Supporters of America First Scrooges? It’s going to be a long, cold winter in the United States, but … END_OF_DOCUMENT_TOKEN_TO_BE_REPLACED