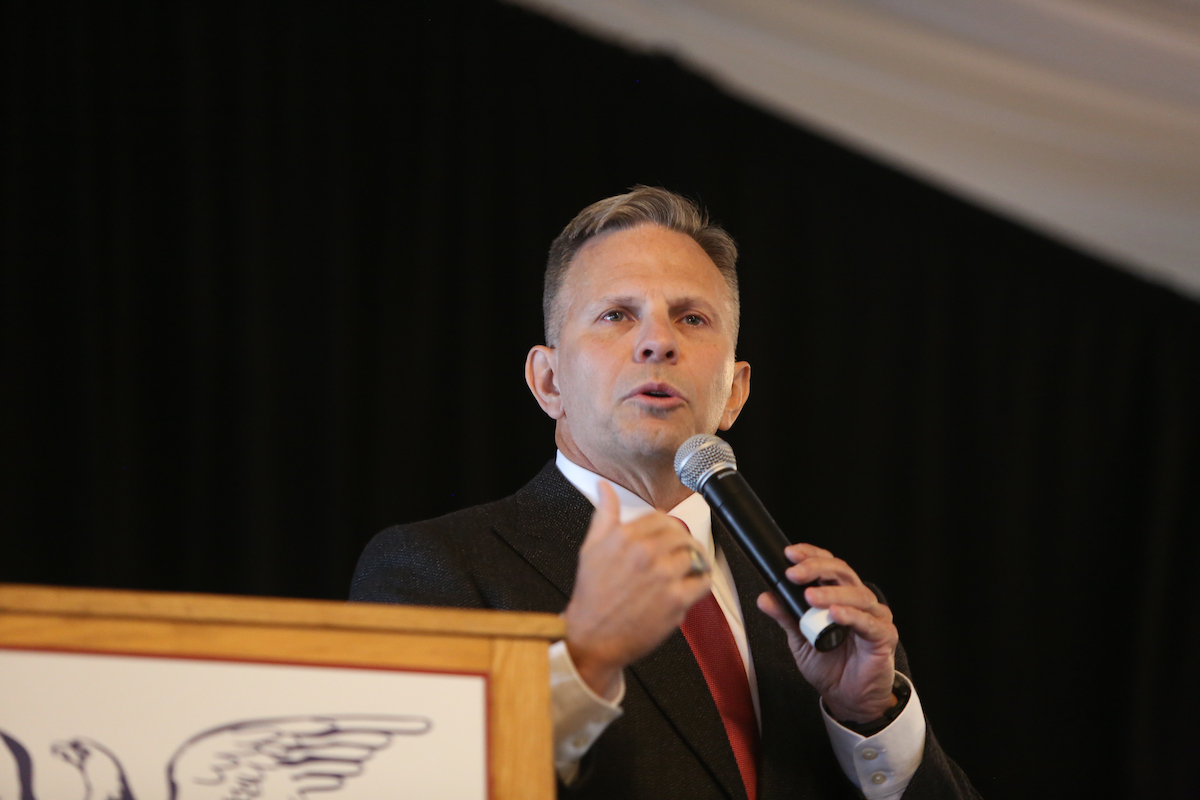 Phyllis Schlafly’s Gateway Eagle Council XLVII from September 14-15-16 at the St. Louis Airport Marriott offered a stellar line-up of speakers from this country, but there were also two speakers from “across the pond” and even one from down under in Australia, Babette Francis.  Babette was born and raised in India before meeting her Australian Husband.  She is one of the founding members of Endeavor Forum Inc., a pro-life, pro-family Australian women’s organization that has links to similar groups overseas.

Although Babette’s presentation about The Fraud of Transgenderism was notable, I chose not to expound upon what she said, but instead decided to highlight two speakers from across the pond and one from the U.S., all of whom spoke about security issues faced by this nation, and to a much greater degree in Europe.  Each speaker had a high regard for this nation and President Trump.  Their remarks were thought provoking and at times surprising in what was revealed.

Lt. Col. Tony Shaffer spoke on the afternoon of Saturday, September 15.  Lt. Col. Shaffer (retired) is a highly experienced intelligence officer, a recipient of the Bronze Star, with 30 years of field and operational experience.  He has testified before Congress on key intelligence issues, lectured at the U.S, Army War College and is a nationally known Subject Matter Expert (SME) intelligence collection and policy, terrorism, date mining, situational awareness and adaptive/disruptive technologies.

Initially, Shaffer referenced a joint press conference that took place on July 13, 2018, at the prime minister’s country home in Chequers. When asked to elaborate on his comments on immigration Trump said: “Allowing immigration to take place in Europe is a shame. . . I think it’s been very bad for Europe. . . I think it’s changing the culture.”

Lt. Col. Shaffer believes the invasion of immigrants is not happening by accident. It was deliberate as chaos benefits the political Left.  Wars in Syria and Iraq helped create what is on-going in Europe, the expansion of Islam.  As such, we helped create the existing conditions in Europe. According to Shaffer, migration is “a political movement that is taking place by the radical element in society today.  It destroys Western culture.”

Europeans are beginning to realize that immigration is not really benefiting them, but the European Union remains congenial to the invasion of immigrants despite the existence of sleeper cells ready to spread terror.  Saudi Arabia could help by building whole cites in the desert to house the refugees, but, according to Shaffer, Saudi Arabia wants the Islam religion to spread.

In speaking about President Obama and why his administration had so many failures, Shaffer gave this explanation:  “All solutions were based on a political point they wanted to score.  Refusing to act on what was reality, political motivation became the norm.”  According to Shaffer, the Obama administration wanted the crisis to remain in North Korea.

Said Shaffer, “Europe has become a basket case. Obama said it would take ten years to defeat ISIS. Trump told the Pentagon to kill, and Trump did so in less than two years.  We must encourage those in Europe to think for themselves and then make good choices.”  A looming issue right now is Turkey. There is the continued detention in Turkey of Andrew Brunson, an American evangelical pastor who faces 35 years in prison on charges of espionage and terrorism. Controversy also exists over the sale of F-35 to Turkey over its Russia deal 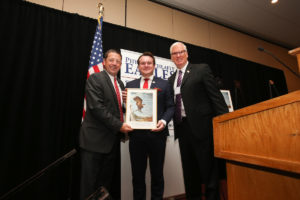 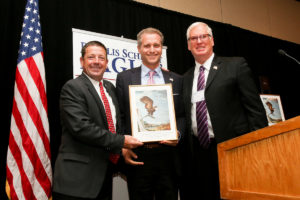 Dominik Tarczynski is an MP in the Polish Parliament.  He serves as the vice president of the European Conservatives in Council in Europe. Dominik is also the chairman of the Subcommittee on the Transatlantic Trade and Investment Partnership between the United States and the European Union.

Petr Bystron is the Speaker of the Alternative for Germany party (AfD) on the Foreign Policy Committee of the German Bundestag.  He was born in Olomouc, former Czechoslovakia in 1972, and came to Germany in 1988 as a political refugee and joined the European-critical AfD in 2013.  He is currently one of the 10 most popular German politicians on social media.

Eagle Awards were presented to Tarczynski and Bystron at an awards dinner on Saturday night, September 15.  As Ed Martin, president of Phyllis Schlafly Eagles said:  “Both of these men have had a great impact on the fight for freedom in Europe!  Phyllis Schlafly created the Eagle Award to honor those who dedicate their work to God, Family, and Country. Dominik Tarczynski and Petr Bystron are doing just that!”

During the final morning of Eagle Council XLVII, Sunday, Sunday, September 16, Dominik and Petr participated in a panel discussion:  Future of the European Union.  Brett Decker was the moderator. Decker has written and provided strategic communications advice for projects in the U.S., Asia, Australia, Europe, Latin America, and the Middle East.  Brett is the co-author of Phyllis Schlafy’s book, The Conservative Case for Trump.

Brett Decker revealed that back in 2012, four years prior to Trump’s election, he had a long conversation with Trump.  At the time Phyllis said that he might be our guy.

As moderator, Decker prefaced his discussion by citing that Europe is in the eye of the storm in its war between Islam and Christianity.  We have radical Islam invading Europe in a madness started by Leftists.  It’s about Europe’s identity as a Christian culture.  Europe is also facing globalism at hyper speed.  Poignant questions were then posed to Bystron and Tarczynski by Decker, such as the future of Europe and the Trump factor.

I was taken back when Germany’s Petr Bystron said, “America doesn’t care about Europe.”  As to the future of Europe, Bystron spoke of the difference between Europe and the European Union.  According to Bystron, the European Union doesn’t have a long future because of its bureaucratic control.  Since 1990 EU has become steadily worse. It now has a monetary unit that doesn’t work. We were told that we had to save the Greeks.  We did save some banks in the process, but it’s money Europe will never see again.

On immigration, Bystron related how German Chancellor Angela Merkel opened Germany’s borders in 2008 to immigrants. Now immigrants cross over seven countries to get to Germany.  It has become too much for Germany, so Merkel now wants to spread the immigrants around Europe, enforcing other countries to take refugees, but EU’s 28 members disagree on a common asylum policy and a fair distribution of refugees.  The row has split the bloc for three years and shows no signs of being resolved. Crime associated with the refugees has become a problem in Germany and throughout Europe.

Poland’s Tarczynski stressed how the future of Europe depends on fighting for its identity.  If we don’t do so, no one will fight for us.  Our identity is found in our DNA.  We must fight for it or become Muslim.  It is a question of whether Europe wants Roman or Sharia law.  If Europe allows jihadists to take over, Europe will be dead.  Angela Merkel is looking for cheap labor, for which Bystron called her naive.  Thoughts expressed about this nation:  “If America will be great again, the world will be safe.  America is a great ally of Poland.  The future of Europe depends on Donald Trump. Do we want Roman law or Sharia law?”

As to the press in Germany (and in the rest of Europe), Bystron referred to it as the “yellow press”, not unlike the media in this nation.  He cited an example of media bias when Michelle Obama was presented as representing the next “Jackie”, while first lady Melania Trump was completely ignored.

Those in Bystron’s party in Germany are called Nazis, although his party has in it the second largest number of foreigners.  According to Bystron, Merkel’s invitation for immigrants to come to Europe has nothing to do with humanity. She instead wants poor people to exploit. Said Bystron: “If Merkel really wanted to help people, she would help them in their country of origin.”

Keeping on the theme of immigration, Tarczynski of Poland called the whole immigration thing a new religion. Christianity has been replaced with the idea of helping and caring especially for the migrant population. Those of us who fight back against the Left are called Fascists or Nazis.  Has the Left forgotten that Stalin killed 200 million to Hitler’s 60 million? The same Leftist press exists in Europe, with name calling and bullying, if Leftist views are challenged.

What You Need To Know about the 2 vaccine mandates. Andrea Kaye, guest host of the #ProAmericaReport, explains how SCOTUS is adding another day to … END_OF_DOCUMENT_TOKEN_TO_BE_REPLACED

What You Need To Know is January 6th has been politicized. Andrea Kaye, guest host of the #ProAmericaReport, talks about January 6th as we go into the … END_OF_DOCUMENT_TOKEN_TO_BE_REPLACED

If the education establishment wants to know why public schools don't get much respect from our citizenry, they need look no further … END_OF_DOCUMENT_TOKEN_TO_BE_REPLACED

Robert Strange McNamara belongs on the daytime soap operas. Better yet, his histrionics belong on Donahue or Geraldo or Sally Jesse Raphael. We are … END_OF_DOCUMENT_TOKEN_TO_BE_REPLACED

What You Need To Know about Biden’s worst week as President. Andrea Kaye, guest host of the #ProAmericaReport, explains how this has been the worst … END_OF_DOCUMENT_TOKEN_TO_BE_REPLACED

Phyllis Schlafly Eagles · January 14 | Nobody Likes Injustice Nobody likes to see injustice in America. Unlike in other nations where corruption is … END_OF_DOCUMENT_TOKEN_TO_BE_REPLACED