The Gulf War marked a new day for the American Armed Forces. Phyllis Schlafly considered this chapter of American military history to be especially important because it allowed the American people to “shake off our self-image as a defeated nation, characterized by that embarrassing picture of the helicopter lifting its last load of refugees out of Saigon.” The Gulf War allowed the American people to compare and contrast the Vietnam War under President Lyndon B. Johnson and the Gulf War under President George H. W. Bush. Just days ago, we saw a similar contrast as President Trump announced a change from President Obama’s policy in Afghanistan. Let’s see what contrasts can be found so we can learn our lesson from history through the writings of Phyllis Schlafly and feel the “national exhilaration” of total and swift victory.

The Gulf War proved the duty of a nation to remain constantly ready to defend its interests in the face of military opposition. Phyllis Schlafly was quick to point out that America’s vast network of technologically advanced military intelligence was only able to detect thirty-five of Iraq’s two hundred Scud missile sites. If we had prepared only for the predicted threat, our forces would have been woefully inadequate to the task laid out for them. Similarly, the duty of our federal government today is to protect its citizens and its interests. Every other function, from the preservation of free speech to the preservation of national parks is predicated on the ability of the nation to defend itself in military combat.

President Donald Trump has made great strides in reshaping America’s military to be able to fulfil that fundamental task of defending America. With new policies barring transgender individuals from military service, the president has reaffirmed his commitment to taking the focus of the military off of political correctness and putting it back on winning in combat. In a tweet, he cited that, “Our military must be focused on decisive and overwhelming victory and cannot be burdened with the tremendous medical costs and disruption that transgender in the military would entail.” While the debate raged over whether or not the undeniable monetary costs associated with having transgender people in the military should be considered “tremendous,” nobody seemed to feel like talking about whether having them in the military would actually help the military carry out their mission. Allowing men to switch to women’s barracks simply by claiming to feel like a woman not only would put servicewomen at risk, but it would also be horrendous for morale. When we consider the problem with a proper perspective on what the military should be about, the answer to the question of transgenderism in the military is obvious.

The Gulf War also proved that total and swift victory should be the goal in any military action. While LBJ took a course of slow escalation in Vietnam that ultimately led to defeat, Bush unleashed the full military might of the United States to end the conflict as quickly as possible. Phyllis hit the nail on the head when she said, “Overwhelming superiority, overkill, redundancy – those are all positive factors when it comes to winning battles. They do not mean we waste unnecessary resources; they mean we shed less blood because the enemy gives up sooner.” These principles are not restricted to the twentieth century. Days ago, President Donald Trump unveiled a plan to change President Obama’s strategy in Afghanistan. Rather than having “strategic patience” and slow escalation with publicly acknowledged timeframes, Trump pledged to use the time-tested method of rapid escalation.

Our military now has a commander-in-chief who recognizes what their proper function is. By allowing our troops to do their job and equipping them for it, the President is showing that he understands history and has the best interests of our troops and our nation in mind. Phyllis Schlafly wrote about the Gulf War because she understood that our history can give us “lessons of lasting value.” The biggest lesson to learn from the Gulf War is that total military superiority is the best way to protect our nation. The April 1991 Phyllis Schlafly Report verifies the fact that President Trump’s Afghanistan strategy will save American lives and lead to a more swift conclusion that neither President Obama nor President Johnson could have achieved.

To view the April 1991 Phyllis Schlafly Report in its entirety, please click on the image below 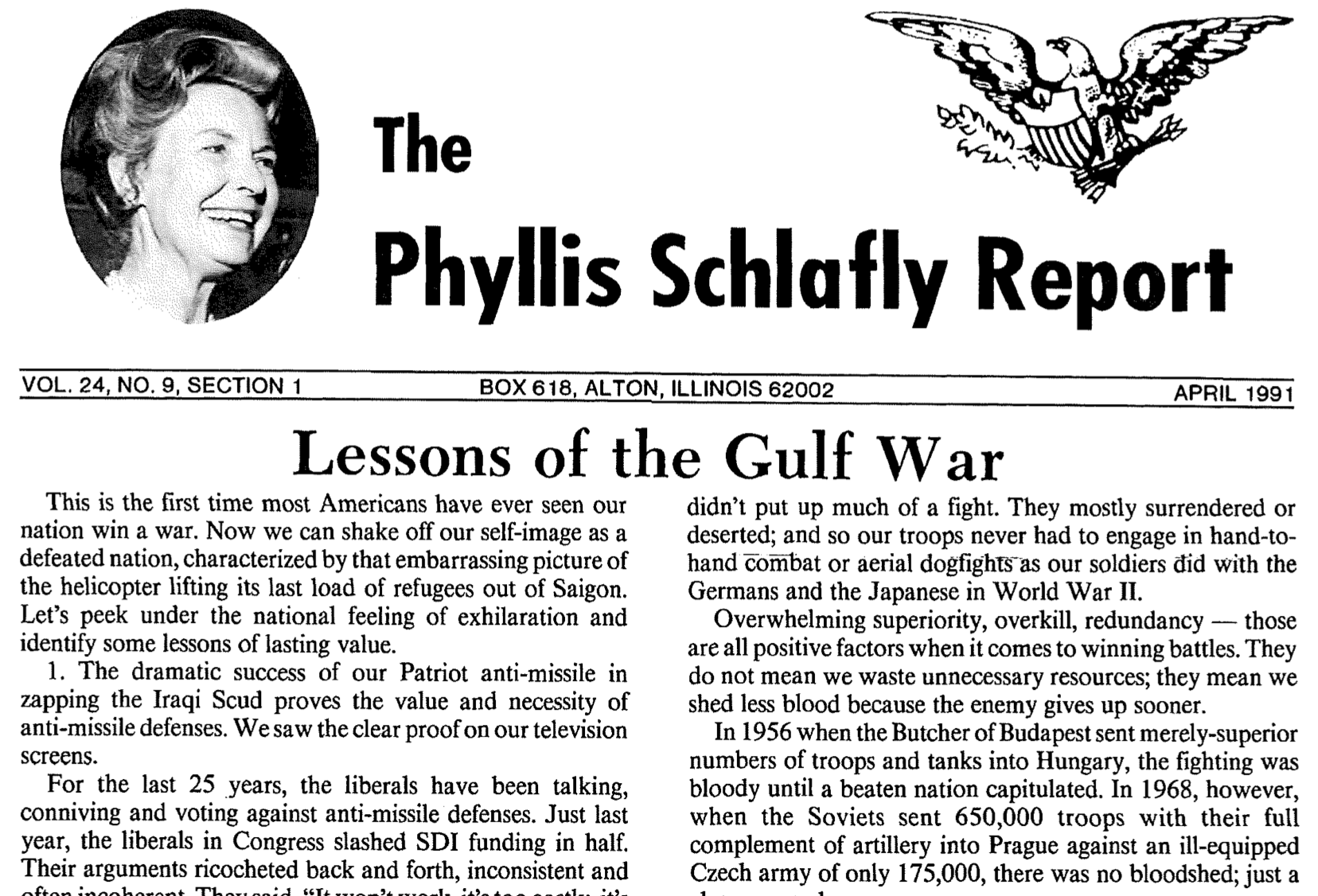 “This is about the future of the liberal world order and we have to stand firm,” declared Biden Administration official Brian Deese. “Liberal world … END_OF_DOCUMENT_TOKEN_TO_BE_REPLACED

What You Need to Know is the media is finally reporting on the Southern Border! Governor Ron DeSantis and Governor Greg Abbott are forcing the media … END_OF_DOCUMENT_TOKEN_TO_BE_REPLACED

Phyllis Schlafly Eagles · #WYNK: Who Is Congressman Troy Nehls? | September 28, 2022 #ProAmericaReport The following is a transcript from the Pro … END_OF_DOCUMENT_TOKEN_TO_BE_REPLACED

What You Need to Know is The Narrative Machine is Obsessed with Trump! First, it used to be called the Trump Exhaustion Syndrome now the left is … END_OF_DOCUMENT_TOKEN_TO_BE_REPLACED

Phyllis Schlafly Eagles · September 20 | LIV Golf Delivers a Hole in One LIV Golf has appeared as the foremost competitor to the PGA, which has led … END_OF_DOCUMENT_TOKEN_TO_BE_REPLACED